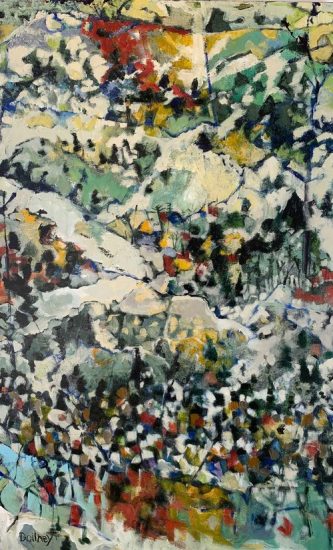 As you approach the sunlit clerestory of Salt Lake City’s A Gallery, the first of Toni Doilney’s paintings you see, “Old Town,” prepares you for the dare and ski-run of all these paintings — a rising and falling series of moving terrestrial lines, suggesting terracing, the magic of seemingly endless terraces in Chinese landscape paintings, coalescing like braids in hair.

There is also a little terror here, with titles like “Thicket” — what lurks in a thicket, beneath the camouflage of sticks and leaves? — or the pacifically named “Green Space” — what history lies there in one plot of landscape space through earth-time? As someone once noted, when we call anything about nature beautiful, we usually really mean terrifying. The more terrifying the landscape phenomenon, the more beautiful we usually declare it to be.

Or can the visual density of cities, filled with so many nameless and unknown persons and histories, completely impossible to know, except in small fragments, be as terrifying? Some of Doilney’s paintings are vast swathes of cities, buildings, windows sometimes in jumbled over-number, roofs and foundations incredibly crazy-angled; chimneys, the usual compass angle for north, all have wildly varying leans in paintings like “Amsterdam” and “Cotswold.”

As the titles remind you in “A Sense of Place” the painter has been to, and lived in, many places. Yet they’ve all become one jewel box in her head, an extraordinary jewel box, too, lavishly and bravely spilled. Colors raw and vivid, and muted too, burst forward, often with settings of shadow-black, like the metal leading between stained glass shards. Gems of mined color seem to jump forward, then run away. In the very mix of her acrylic paint there seems to be a secret recipe, containing the gilded gloss dreams of oil paint but also the sturdy goblins of tempera — acrylic paint that doesn’t seem really to be acrylic paint, emulsion of acrylics, minerals, milk, eye of newt. 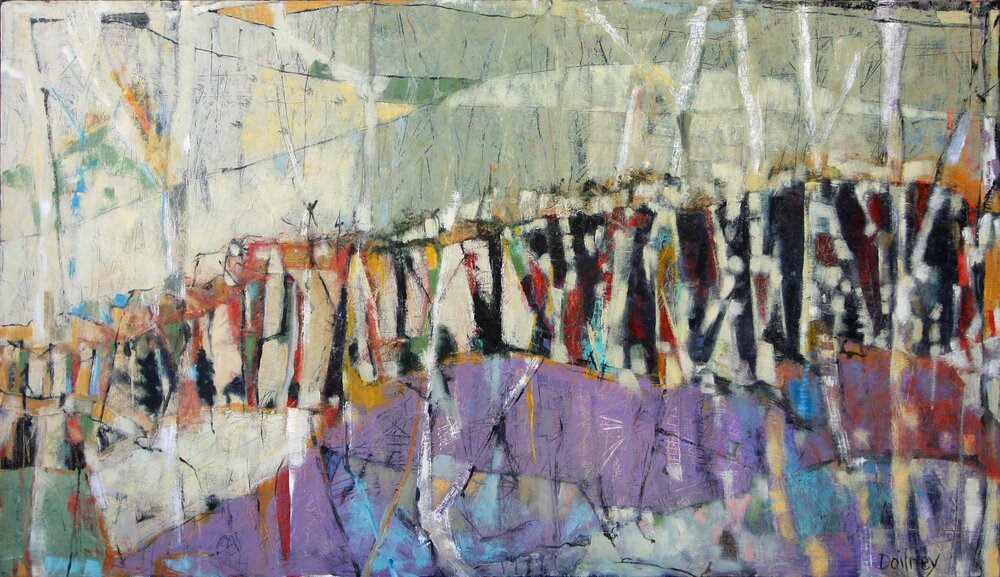 But in “Yellow House” there’s only one dwelling place, with one color (in its title). “It seems to house the spirit of Vincent van Gogh, though nowhere does Doilney employ the trumpeting yellow van Gogh used extraordinarily often in his paintings. In this yellow house, Doilney uses only dun, dull haystack dun from hay harvested long ago, symbolic of someone trying to insulate themselves from the world. Its hunched roof seems almost animate, animal, a beast of burden buckling under strain. From this gently yellow house’s chimney comes a smeared, quick, puff of smoke, making you think of the van Gogh self-portrait, bandaged ear, pipe in hand, eyes dead-set ahead. He’s inside.

Another painting, “Monsoon,” vies with “Yellow House” to be one of the most entrancing paintings here. An almost Aztec dance of angular black-painted marks works its rising and falling way through, center to corners, suggesting the chain reaction of mood weather or disaster can bring to a city, or a continent, or one brain. 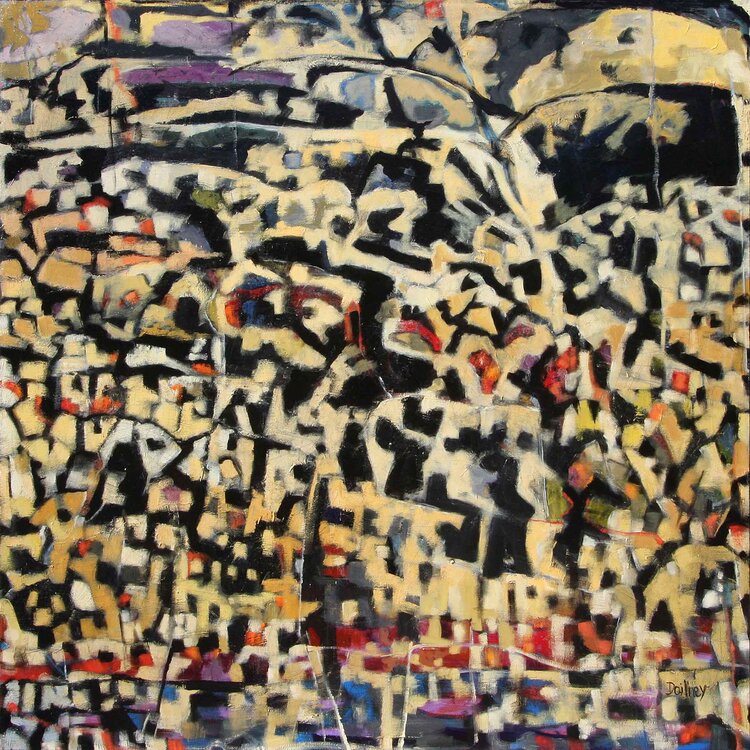 “Red Fruits,” a small square painting (but the most vivid painting here) is a tsunami of pomegranate reds where the milkiest intense periwinkle blue moves like cool lacework throughout, intensifying the power of the reds. Fruit and flowers have deserted their polite containers. A fruit dish and a pitcher stand empty. Flowers are on the tabletop; so is the fruit.

In several works Doilney plays with the magic of the tabletop, which becomes, within the tableaux-boundary of the picture frame, another frame, almost like a little fresh blackboard for an Einstein. In “Dining Table” it is star and foreground but also table for symbolic play, for the spirits of Miro or Picasso or for children with their dreamy, many-colored wooden blocks. (The greatest artists, Picasso said, are children; adult artists are only struggling to reclaim that childish once-natural genius.) Cool and dislocated geometric shapes, instead of dishes, frolic. From this table’s second-floor vantage point, you have X-ray vision, or it’s a glass house. There’s no wall. You see from top to bottom the big house next door, instead of a wall. Black, simple ladder-back chairs surround this table, strangely all at different angles, as if sudden departure was suddenly necessary, or as if play is always about to be resumed. 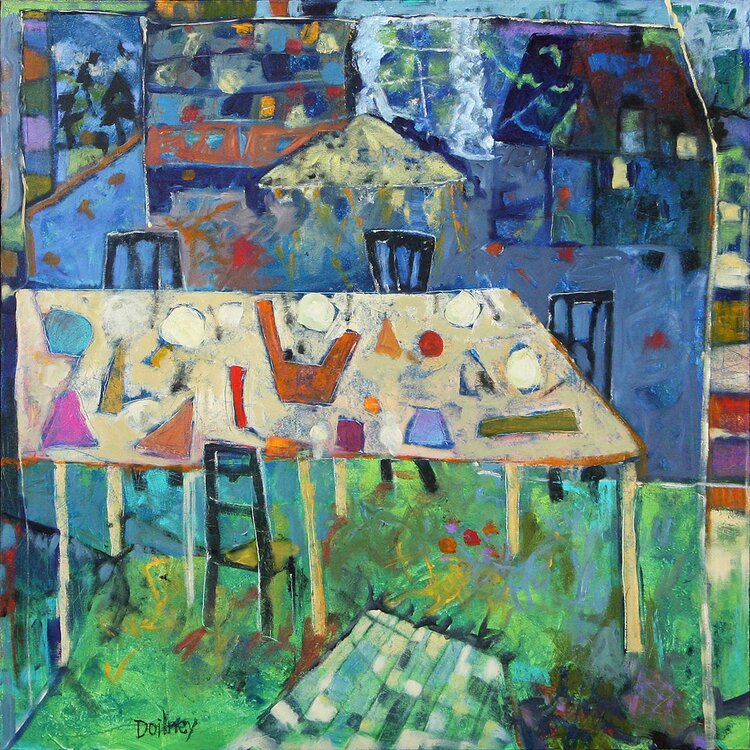 The chairs’ severe black lines are a lot like the severe blackness of trees in “Winter Memories,” where three tall trees are the robust upthrust shape of carved stone arrowheads on display, or the shape of one tall standing leaf. Each line in them seems incised, all going upward at the same angle, like the lines in leaves, or the repeated bones in gutted fish. Blackly emerald-malachite green, they’re dangerously arrow-form, yet with an incised featheriness about them, too, as if dark green all-in-one Indian feather-tipped arrows. If the low roundish shapes beneath them are boulders, these rocks of Doilney’s must be Burnham wood’s, rocks which, when no one is looking, advance and move.

This show is towns, thickets, tableaux, terrace and tabletop, Indian memories, and van Gogh: a jewelry box, as they say, to die for.

Toni Doilney, A Sense of Place, A Gallery, Salt Lake City, through November 12.

Tagged as: "A" Gallery, Toni Doilney