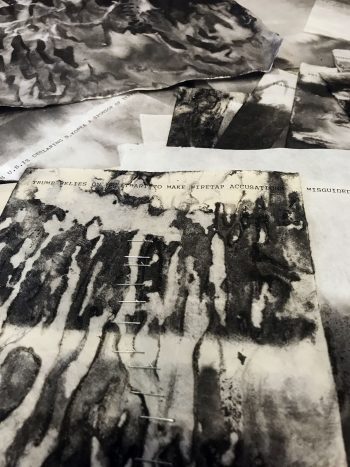 Works from the Divisive Landscapes series in the artist’s studio. Photo by Shawn Rossiter.

As our most dynamic organ, the brain is at once remarkably expansive and persistently conservative, constantly aiming to preserve its energy. The ever-increasing pace of social media has nurtured this trend of mental conservation—instead of reading and prioritizing media according to its supposed importance or significance, we often are drawn to that which is highly visible and replete with large, striking language. Headlines—a staple of Western journalism—are now paramount to the articles themselves.

That is to say, that when scrolling through threads or timelines, headlines appear as coded markers of information, vying ever so desperately for our attention amid a sea of cat videos and baby pictures. Within our information economy, the landscape of possibilities is, well, endless. Undeniably, this era of information overload makes it easy to simultaneously flood us with viral news stories, and yet drown out highly important topics with a fickle 24-hour news cycle. In 2018, whether we digest news online or the old-fashioned way, it appears as though our social landscape is fraught with uncertainty and contention. As foreign as the comparison may appear at first, it’s compelling to consider the headline as decidedly physical–ripe with comparison to geographic barriers that exist within a tangible landscape.

This idea is quite intuitive to Sandy Brunvand. As a nature enthusiast and an artist, her identity seems marked by a natural predisposition to view the world through what she calls “landscape-colored glasses.” In a romantically American fashion, artists long have considered the canvas a landscape by which to explore their cognitive and creative potential. Now, her series “Divisive Landscapes,” an ongoing project that began in 2016, is a part of Site Lines: Recent Work by University of Utah Art Faculty, on view at the Utah Museum of Fine Arts through Jan. 6, 2019.

As its title would suggest, the series explores landscapes decidedly more cerebral—and turbulent—than the pristine Western landscape of Utah lore. Crafted on small sheets of thin-fiber paper, the paintings are created by marking a black ink-water mixture onto the surface. Each result is somewhat different, as variations occur depending on the amount of ink, the length of the drying process, the unique surface of a given sheet of paper, and environmental exposure. Brunvand relishes the ritualistic process of their making, and only crafts “batches” of four-to-five pieces at a time. The abstractions mimic the organic forms of real landscapes, and often simulate waves or branches.

Discerning the alterations between each painting epitomizes Walter Benjamin’s idea of the “aura,” the notion that the dynamism emanating from each creation reflects the essence of that which was poured into it. The dark ink stains the surface in a variety of patterns, which fluctuate in their thickness, intensity, and connotation. Indeed, each piece looks remarkably different from the next and through its dark abstractions, entertains a number of interpretive possibilities. Embedded within the ominously dynamic abstractions of each painting, Brunvand includes headlines from the past two years, specifically those relating to the aftermath of the 2016 presidential election: “Fear and Uncertainty,” “Trump Orders End of ‘Dream,’’ “Today, I Am Delivering.” 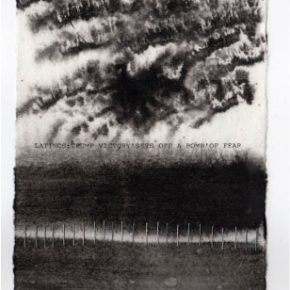 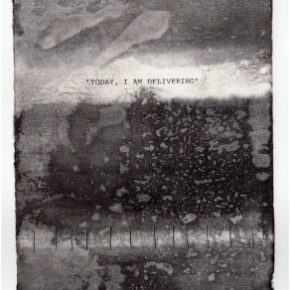 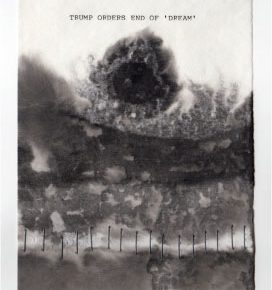 Undeniably, the angst of Donald Trump’s election in the fall of 2016 far eclipsed the customary tension of partisan politics and continues to create a virtually unprecedented amount of fear, chaos, and acrimony. Initially, Brunvand began by collecting every copy of The Salt Lake Tribune after Trump’s election, artfully considering the news stories as signposts of the palpable tension surrounding her. Having never really engaged in “political art” previously, she began clipping political headlines accompanying small text excerpts to her ink paintings, relishing in the juxtaposition between text and image.

The act of stapling the clippings to the paintings was the beginning of a fascinating process that would lead her to abandon the clippings entirely, instead electing to re-create the headlines within the body of the painting using a typewriter.

Brunvand’s mark making is at once spontaneously determined by the force of the hand and the dominance between ink and water that any given combination may possess. While it may appear that this intuitive process is at odds with the careful and deliberate curatorial process Brunvand undergoes in selecting news headlines, she is careful to let the headline add additional meaning to the piece. It’s this combination that creates a true tour-de-force, both visually and conceptually. In the last, and most current iteration of the series, Brunvand’s typed headlines hover as ghostly markers of an externalized angst. Just as she embedded text within the corpus of the painting, Brunvand adds staples directly atop—or perhaps within—the works. What results is a striking visual effect. While the staples create a jarringly abstract quality to the pieces, Brunvand artfully sees the act of stapling to be rich with significance. That is, the staples evoke the act of healing after a surgery atop the thin “skin-like” fiber paper housing them.

The work communicates with a blend of touching delicacy and psychic vibrancy the power of the artist’s mark. For centuries, words and images have worked separately to convey deep emotional and political messages, yet here their combination affords them each maximum effect. Perhaps the point of “Divisive Landscapes” is not to make us move “past” the headline, but to dive within it, an exercise worth more now than ever before.

Sandy Brunvand’s “Divisive Landscapes” is part of Site Lines: Recent Work by University of Utah Art Faculty, curated by Felicia Baca, on view from September 28, 2018-January 6, 2019, at the Utah Museum of Fine Arts.