The Salt Lake Art Center invites you to sit and contemplate their current exhibition of contemporary Chinese art. In Displacement: The Three Gorges Dam and Contemporary Chinese Art four artists respond to the Three Gorges Dam project, a massive engineering feat that, while harnessing the Yangzi River to bring hydro-electric power to parts of China, has displaced over one million people and submerged over a thousand towns. Displacement is an exhibition that yearns to spend time with visitors, and, in turn for their patience, brings patrons through a journey of media, history and challenging views on social progress.

Visitors are awed as they peer down into the main gallery, confronted by Liu Xiaodong’s “Hotbed,” 2005, an oil painting spanning several large canvases. The massive image captures sole attention, hiding most of the exhibit’s accompanying artworks. Xiaodong painted the scene on site and asked actual laborers, brought to dismantle towns before flooding, to pose for the work. The painting is meant to demonstrate the time and effort used to create it through the passage of a changing sky and slightly mismatched canvases. The “Hotbed” display contains one of the most successful elements of the exhibition’s design: a video of the artist at work on the very same painting, bringing a sense of motion to a static moment that cannot be created under the same circumstances again. What the carefully designed timeline fails to convey, this short video puts into perspective.

Placing “Hotbed” in the position to greet visitors draws them into the gallery. While an initial glance at the exhibition space may surprise those expecting to see more works, once the confusion has worn off, patrons realize they need to associate with each piece for a longer time period than they might at other displays. After all, each section represents an individual that Displacement is introducing us to. The effort patrons put in becomes the product of the display, a transfer of energy much like the Three Gorges project itself. 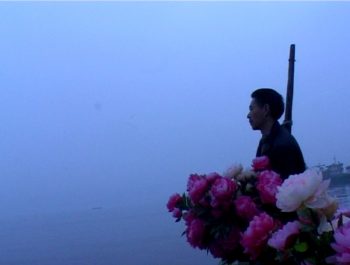 Moving through the gallery, and into another discipline, visitors encounter the work of Chen Qiulin, who shares her personal connection with the project in a video installation. The series of four works — “Rhapsody on Farewell,” “Color Lines,” “River, River” and “The Garden” — move through the artist’s feelings about the project, evolving from initial reactions of anger to “growing up” and understanding the good associated with the dam. Qiulin merges contemporary settings and issues with traditional Chinese Opera and stories, resulting in a chronological conversation, and speaking to the use of new media wrestling with ideas of changing traditions. Visitors are asked to stop, watch and listen, tasks that seem obvious enough during a museum visit, but remind those watching to personally read the videos. Even more convincing of the installation’s power are the people waiting for their turn to sit and listen. The overall effect creates an atmosphere of provocative discussion, much of which was shared in whispered conversations on opening night.

Building further on the collision of past and future, tradition and progress is Yun-Fei Ji’s “Water Rising,” 2006, which brings the brush and ink scroll practice of Chinese Literati painting into the exchange. The two landscape scenes include historical elements interrupted by occasional signs of modern life, found in the presence of a bicycle or car. The scrolls meet between their framing walls, bringing subjects together in the void of the corner. The artist develops long-established forms to promote a modern exploration, and just as the artists are part of a lineage that has lived with the Yangzi, every stroke becomes a part of the Three Gorges history. Ji reassures viewers that traditions will continue, even with an altered future.

Perhaps the work hardest to absorb is “Longitude 109.88 E & Latitude 31.09 N,” 1995-2008, a conceptual mixed-media installation chronicling a series of holes dug in the construction zone by artist Zhuang Hui. The multiple holes, created in land that would soon be underwater, reflect the routine of daily tasks carried out in the face of irreversible change. This work is very connected to the artist’s concerns for the future, and because of its conceptual process is arguably the most moving piece. The included quote asks viewers, “During this struggle with nature, when humans are gaining profit, will nature find an alternative means of punishing us?” Hui acts as an advocate for the land, sharing hard evidence, documented in black and white, that the Three Gorges project will change the landscape.

The exhibition consists of four works of art on a large scale, in both concept and size. The Art Center’s new Director, Adam Price, shares that a sufficient scale is needed to create its own environment, and the Art Center’s physical space works well with this type of show, even if it does not bring in the masses. Price provided a more in depth tour, which was needed to understand many of these insights, only made clear with further counsel of inside information from the original curator, who gave a previous tour. He adds that the exhibition’s success is a question of how much time members of the public are willing to give to educate themselves, and that Displacement is a “complicated picture,” operating on a high level. In a show like this, the aesthetic appeal becomes very important. 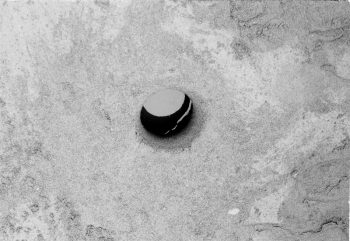 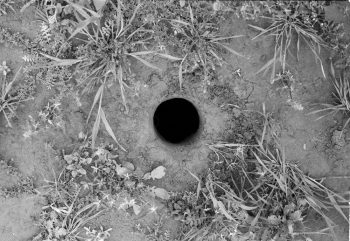 While the average visitor might appreciate a bit more guidance to move through the exhibition, its focus on the artist’s stories and selected quotes directs interpretation. Displacement offers four views rather than two sides. The positive and negative outcomes of the Three Gorges project are mentioned in the text panels and timelines to convey a general conflict, but the exhibition stays true to personal struggles to accept an historic change, and how the artistic process can act as a coping mechanism. Following each artist’s reaction to the project leads viewers through the grieving process on a small scale. Contrary to the physical size of the works, visitors move from anger to acceptance in a matter of hours. Displacement is a mission to share and record the present. It brings exposure to contemporary works many would not have seen otherwise, and leaves visitors with the hope to gild a fleeting landscape, and document transforming relationships with the Yangzi.

Displacement: The Three Gorges Dam and Contemporary Chinese Art is at the Salt Lake Art Center through February 27.