One of the best known, most extraordinary photographs of the heavens ever taken is called the Hubble Deep Field. It was made by pointing the orbiting Hubble telescope, surely one of the greatest achievements in human history, into a tiny segment of space, about 1/30 the area of the full moon, and taking an exposure that lasted ten days. Considering the challenge of keeping the telescope’s view stationary for so long, even as it orbits the earth at a velocity of 17,500 miles per hour, the resulting image—what appears to be thousands of stars, each of which is in reality a constellation containing billions of stars, the constellations all clustered together as they were at the beginning of the universe when their light began its ten-plus billion years travel to the Hubble’s collectors—is arguably the greatest single act of image-making ever achieved. 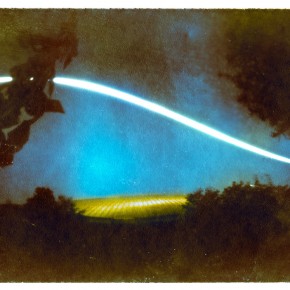 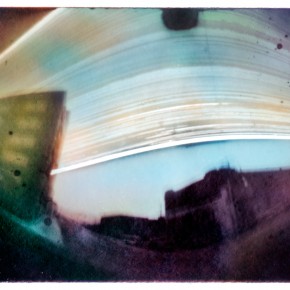 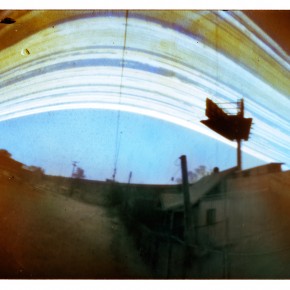 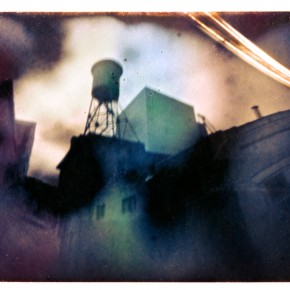 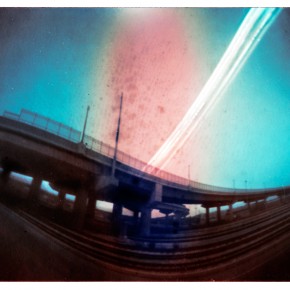 It turns out that there is a connection, though, on the level of Allred’s intentions. At an artist’s lecture he gave on 18 October, he outlined various ways of thinking about the astronomical circumstances in which his work has taken shape, claiming for each an influence on his art. These included the behavior of objects in time and space, both required in quantities the human mind cannot fathom without intervening metaphors and imaginative leaps that can only bring about appreciation for the impossibility of ever really grasping them. He also had much to say about the gradual development of human knowledge of the universe, of time and distance as inseparable twins, along with such technological feats as photography and navigation with the astrolabe. If Allred proved anything, it was that a single topic, explored without discipline, can be shown to encompass everything.
The challenges of keeping a camera stationary for a long exposure are well known to Matthew Allred, twenty-two of whose pinhole camera landscapes, some of which involved exposures far longer than the Hubble Deep Field’s, make up Heliography: The Arc of Time, on view at the Finch Lane Gallery until November 15th. Other than the need, common to both projects, for exposures long enough to gather sufficient light on a photographic emulsion, there seems little in common between Allred’s atmospheric variations on familiar scenes and Hubble’s almost unimaginably strange ones. In fact, when I was introduced to Allred’s work by 15 Bytes Editor Shawn Rossiter, who wrote a succinct and accurate appreciation of the project for the magazine’s blog, my original response was to wonder why the artist hadn’t just painted his works from scratch, rather than limiting himself to what he could produce with a time-consuming technique that fails several times for each successful print. In fact, I later learned that in effect that’s pretty much what he’d done. His combination of cameras of his own invention and challenging chemical manipulation to counter the unavoidable over-exposure of negatives produces a black-and-white image, a kind of scenic skeleton, which Allred then treats creatively with photographers’ toners, in effect tinting the sketch in order to produce a hybrid of painting and photograph.

I don’t usually write reviews in the first person, but in this case I want it clear that what follows is a personal opinion, which readers may choose to reject. When I go to see an artist talk about his art, I expect the principal subject to be the art. When the maker takes advantage of my interest to tell me about his philosophy, his tastes, or his personal life in ways not apparent in, or crucial to, those works, I feel abused. In this case, Allred’s efforts to implicate vast, but ultimately tangential subjects as part of his work’s content could only make that work appear less successful: trivial by comparison. The stately dance of sun, moon, and stars in the heavens has been part of human awareness since prehistory, an essential component of projects including Stonehenge, the Jaipur observatories, and Abu Simbel, as well as humble, yet eloquent petroglyphs left by preliterate peoples all over the world. Allred knows this. We find ourselves bookended by such evocative achievements on one side, and by the awesome precision of our ventures into space—both in person and by mechanical proxies—on the other. The role of art in this remains for the artist to prove.

I really liked Matthew Allred’s nighttime landscapes, and would enjoy extolling their colors and textures, among other virtues. Given the predominance of hand-tinted photos whose artificiality of color is the point, we might discuss the legitimacy of this alternative. I’m also curious to know, briefly, what ideas and previous experiences may have influenced his art. But just because grandiose references have become a necessary ingredient of artistic success doesn’t mean every claim should be taken as proven.

Matthew Allred’s Heliography: The Arc of Time is at Finch Lane Gallery through November 15th. Allred gave an Artist Talk on his work on Friday, October 18th.