Disarming Your Opponent by Giving Them Your Full, Authentic Attention

Disarming Your Opponent by Giving Them Your Full, Authentic Attention
by Trent Thursby Alvey 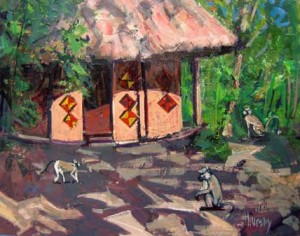 Recently, I had the great privilege to travel to Botswana with two wonderful men: my husband, Dennis Sizemore, and the “Mother of Conservation Biology,” Dr. Michael Soule. Both are wonderful storytellers. What I learned from them is that our own stories are unfolding constantly – our present moments become our story. So here is my story from Camp Akuti, in the Okavango Delta, Botswana.

One day after lunch I decided to paint while everyone else took the traditional nap. Days are long for visitors and camp workers, so from 1:00 – 3:00 everyday the Camp Akuti is quiet. I was in the alpha state of painting a traditional rondoval with tribal looking designs on the round walls.

At about 1:15, two vervet monkeys swung down onto the deck. They had already eyeballed the tea tray left out with tea in a cup, teapot, sugar and milk.

I was still strongly focused on my paintings and I was pretty much ignoring the little guys. Then, a larger, more vocal male arrived with a loud shriek, as he swung dramatically out of the trees in two or three long, graceful, acrobatic sweeps. Immediately, three or four more vervets materialized. They had been somewhere in the trees all along but were invisible. Then the party really started. Since I seemed to be ignoring them, they began mischievously ransacking the camp: pulling the table cloth off the table, tipping over the teapot and allowing tea to run off the table and on to the floor, pushing the sugar bowl off so that it spilled and mixed with the tea, swinging near the liquor cabinet — being mischievous, but not really doing any serious damage.

I didn’t want to try to run them off because I had experienced them before. I knew that as soon as I left my painting box to chase them, they would circle around and probably tip it over, take my brushes and paint tubes up into the trees and taunt me. Besides, I was enjoying their attempts to get my attention. They were pretty much out of pesky tricks when Michael came out of his hut to see what was going on. He instinctively tried to scare them away by using a low male vocalization to say — “Go Away” — and mock-charge them by stamping his feet toward them.

Well this started the real fun. Getting a reaction to their mischievousness was all they needed to amp it up to the next level. Squawking and screaming, they leaped around in the trees, sweeping down to create new carnage, looking harder for anything not nailed down — steal…fruit, bowls, utensils. The more inventive they became, the more agitated Michael became. The game continued to escalate.

At this point, I quit painting and just watched the show. Impossible to ignore, now, the vervets were very energized. They were literally using Michael’s energy to power their destructive, but very creative, activity. Opposition fans the fire.

By now it was 3:00 and the camp folks were up preparing for 3:30 tea, served promptly. Michael had realized the futility of his vigil and the monkeys had grown a bit bored with the game. They had clearly won and were revitalized because of it.

This camp has a history of animals coming in and making themselves known. Two years ago, when Dennis and I were visiting Akuti, a female elephant came in to feast on marula berries from the big marula tree next to the deck. It was nighttime and we heard her moving around just outside the bush camp. We turned out the lights and sat quietly on the deck. She moved in respectfully and used her trunk to grope around in the dark, locating berries and eating as she moved around just a few feet from where we were sitting. She knew we were there but seemed to play the game and ignore us as long as we were quietly respectful. It seemed that she still had something to say, however, as before she left she took a big dump on the front step of the hut belonging to Ken, the camp manager (it was well known that she didn’t like him much and would sometimes charge him in the daytime; he would have to sprint across the open area and dive for cover). Apparently she’d dropped the same message on many occasions.

The next day, I decided to paint the monkeys into my otherwise unanimated painting of the camp. I first consulted my “Mammals of South Africa” guidebook to study the anatomy of the Vervet Monkey: the length of the tail in comparison to the body, the size of the head, the bushy white eyebrows that make them look like the stereotypic philosophy professor – wise and very old. I studied the composition of my painting and picked places in the composition to sketch in rough drawings from memory of the monkeys that I’d observed the day before. Now when they actually arrived I could paint them in quickly. I mixed a neutral gray paint so that I could move the value lighter or darker or move the hue warmer or cooler according to what I would observe first hand. 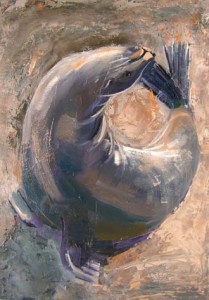 The next day: Everyone is asleep now. Camp is quiet. I am absorbed in my preparations. Right on time, the first two vervets appear quietly. The scouts. I say to them, “Hello, I’ve been waiting for you.” They look at me strangely. I had left out a cup of tea as bait. They proceed to tip it over and start drinking. Then, quietly, a couple more arrive. They scouted about looking opportunistically for something. I greet them similarly, by saying, “Come on in and make yourselves at home, as if you need an invitation.” Now, I’m intently looking at them, their subtle gray coloring, the white areas of their stomach and heads. I’m looking into their hairy ears, the tuft of fur at the end of the tail, their strong haunches used for propelling themselves to great heights with relative ease. I see how easily they make eye contact with me — unlike most other animals — and how they watch each other for behavioral clues. Now they have stopped what they were doing and are looking back at me. I know that I have to work fast — working, looking, working, looking – SEEING really, the way artists do when they are working well. No judgments, just intense looking and listening, sometimes looking and listening blend into one sense. Their vocalizations are a low frequency and quiet, as though they are asking each other, “What the hey is going on here?” They seem confused and a little suspicious at such complete attention, with no apparent agitation on my part. “Very suspicious, indeed,” I think I heard the most professorial of them say.

I’m able to paint in the gesture. Just exactly like the three-minute figure drawings I do every week at home from human models, but these guys stand still only for a few seconds. They were, however, moving slower, more interested in watching me back. I had inadvertently captured their full attention.

As suddenly as they appeared, they are gone, up in the trees — vanished. I looked at my painting, made a few small adjustments, got up, stood back, gave the painting the critical eyeball. Liked the results; cleaned up the paint. The camp ladies came out with tea, the guests appeared, and I told the story as we drank our tea in before leaving on our sunset game drive.

“The enemy is someone who’s story we haven’t heard yet.” Mark Brady

Trent Thursby Alvey is a Salt Lake City painter and installation artist. She is represented in Salt Lake City by A Gallery. This article was originally written for a “Colorado Plateau” conservation meeting at the home of author Terry Tempest Williams and appeared in the June 2005 edition of 15 Bytes.