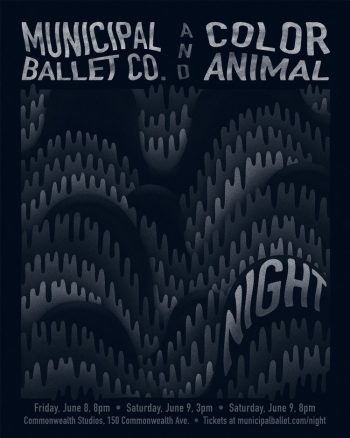 I began driving to the Commonwealth Studios upset that my tidy and prescribed theater route was disrupted on a hot night. But upon parking (finally) I discovered that the Municipal Ballet Company had found yet another magical space for something to happen.The company’s newest concert,“Night” is, in a word, disarming.

In its sixth year of presenting concerts, this collaborative group directed by Sarah Longoria has consistently used charms to relieve the suspicions of both dance skeptics and dance critics. By carefully choosing venues off dance’s beaten path, collaborating with local bands (in this case, Color Animal) and always ensuring that beverages are provided, it’s challenging not to find something to enjoy about the experiences created by Municipal Ballet Co. whether you are a regular dance goer or, more likely, new to the field. For the former, there are new faces and places (did I mention beverages) and for the latter, there are entry points beyond movement.

Many of these entry points are stylized —  garage tracks juxtaposed with ballet steps in a commercial studio, but they are also unwitting and spatial. I am able to turn to the band on my left and notice that Felicia Baca is concentrating and therefore chewing her gum in a particular way. Or, that the audience member to my right closes his eyes at a certain cadence in Andrew Shaw’s voice. If I am choreographically disinterested, I can also see who has sneaked to the bar or the black-and-white photographs in the back of the space. With each of these passing glances, I can just as easily return to the strips of gray marley where a handful of dancers perform the 12 works that constitute “Night.”

Theoretically these dances each represent an hour of the night, from dusk to dawn, and relate to the contemporary political moment. But in my view, that topical idea is less present than something that continually rises to the surface in Municipal Ballet Co. concerts, the complicated way in which so many individuals fill so many vibrant roles in Salt Lake’s art and social scenes.

In this work, no choreographer, dancer, or musician holds a singular title and I am aware as I’m watching that this is not just a dance concert but a dance concert which includes: radio personalities, writers, gallery directors, parents, arts administrators, neighbors, and even one of my first dance teachers. The audience reflects this multiplicity back to the stage and returns a vibrant energy of friends, family, and future collaborators eager to participate in something new.

The atmosphere of possibility has some moments of particular excitement. In “Destruction,” Mary Jessie Floor bourreés while David Ayala and Tim Dwyer (literally) juggle fire around her port de bras. In “Disconnection,” Ben Estabrook’s films take the stage in new contexts, and in “Dismantle,” Nora Price impossibly coolly departs her own solo to harmonize with the band.

But that feeling of possibility is also disrupted at times: when the addition of oatmeal-colored ballet skirts overwhelms the more fashionable aesthetic of clothes-we-happened-to-have, when the confines of the small space cause a choreographic glitch, or when the inevitable disparity among performing bodies is revealed —

the fifth dance of the concert, “Tomb” is performed by Ursula Perry, a Repertory Dance Theatre company member. Her command of the stage is tremendous and this control is derived in part from Chase Wise’s choreography but in larger part, the amount she dances each day. It isn’t until she performs that there is a distinction between her, a dancer by trade, and the former performers who (as described) fulfill many artistic roles but simply don’t have the same degree of daily physical practice. For the casual observer, pointing this out may not appreciably change nor represent their experience, but for me, the first moment of her sharp gestures troubles the former works of the concert. Despite this sentiment, the solo is beautiful, as are many preceding and following dances — a trio by Jo Blake that unfolds alongside the music, Joni Wilson’s crisply cupped hands and delicate movements in “Fragility,” and the unfolding choreographic pieces and earnest pairings within ensemble works.

If disarming is the first word, liminal is the final word.

Municipal Ballet Co. arrives at a boundary between showing audiences ballet steps and exploring choreographic structures; at a threshold of something commercially engaging to audiences but still artistically focused; occupying a place where I like “Night” but also —the best part — that they don’t need me to.