Dirt: A Love Story. 36 Writers Get Down To Earth 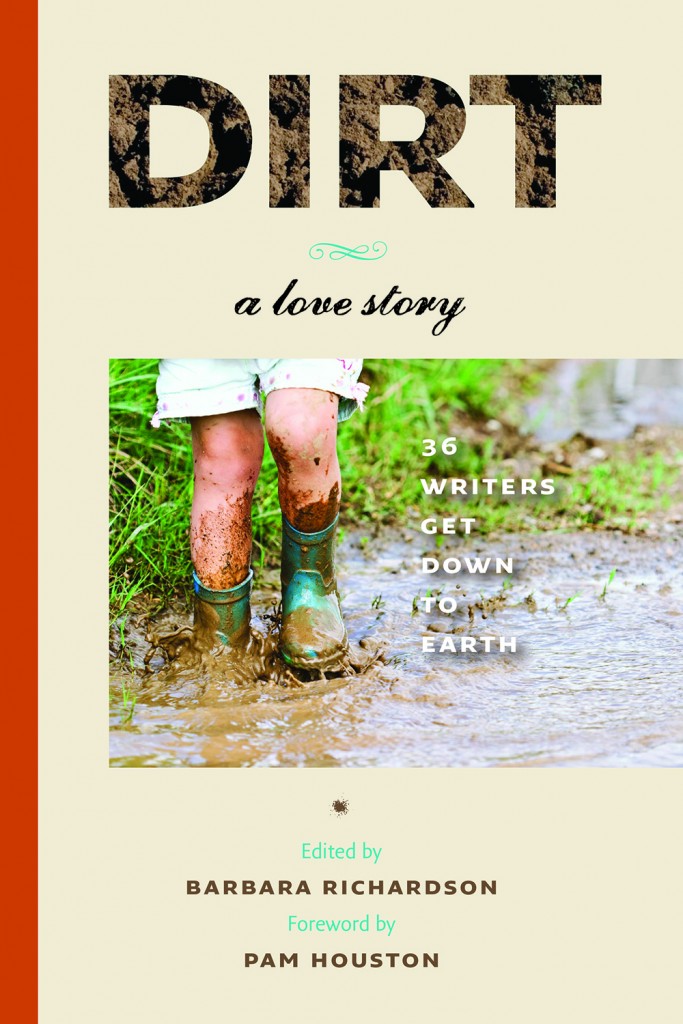 Here are 36 different ways of tasting, seeing, feeling, and experiencing dirt. Reading this collection, skillfully collected by Barbara Richardson, is like being served a small plate dinner with 36 different tastes.

Richardson, a past winner of the Utah Book Award, is the master chef. She says her own dirt tastes of dark chocolate with a hint of coffee, and she presents these dishes as they are: sturdy, grainy, sandy, loamy, stunning. And it’s all dirt.

There’s passionate dirt—Karen Washington in Brooklyn describing her first real home-grown tomato: “I felt the juiciness of sunshine tingling throughout my body as warm juices ran down my chin and arms.”

There’s sensual dirt—Jana Richman writes that “dirt fantasies, like sexual fantasies, vibrate with tension between fantasy and reality. Both are genuine, and one plays off the other, gently correcting and merging the romantic with the banal, the wild with the tame, the unconscious connection to dirt with the conscious experience of dirt.”

There’s sly-humored dirt, like Donald Schueler’s description of how he and his partner Willie found and came to love the Least Worst Land in Mississippi. Their 30-year restorative adventure ended with the gift of their land to the Nature Conservancy.

There’s the dirt political and of course it involves the Koch brothers. They lost. Dirt won. There’s the dirt weird and historic (Darwin played the bassoon to earthworms to test their hearing), and a recurring reminder that lucky children play in dirt. “As a child, pretty early I learned there was a direct connection between dirt and fun.” That’s Edward Kanze. Roxanne Swentzell licked the walls of her adobe home and could tell it apart from the adobe walls of her neighbors.

What children don’t know (and what not enough mothers know) is that playing in the dirt builds a child’s immune system. And a couple of dishes of the dirt scientific served in this book will explain why. It’s those mycorrhizal fungi and such. (“The symbiotic association of the mycelium of a fungus with the roots of plants,” if you must know.)

Like any good meal, this one comes with good conversation. We all know about Peak Oil, but I hadn’t considered the concept of Peak Dirt, how our lazy agricultural habits lead to massive topsoil loss across the globe and what the consequences are. (Not good.) And consider that there’s compelling dirt-related reasons that Bernie Sanders is from Vermont, not New Hampshire. Dirt creates history.

Your sommelier for this meal is Pam Houston, she of Cowboys Are My Weakness, confessing in her lovable style her growing addiction to her own piece of dirt, 9,000 feet up in the mountains where life’s everyday challenges are magnified by elevation, coyotes, and the vicissitudes of dirt. She is your guide to the thirty-six plates. You’re free to ignore her and pick your own meal, naturally, but either way, you’ll learn that each taste varies: each writer sees dirt in a different way, lives it in a different way, and presents it in a different way.

One thing they hold in common is an appreciation for dirt and an understanding of its fragility. As the saying has it, “Humans—despite their artistic pretensions, their sophistication, and their many accomplishments—owe their existence to a 6-inch layer of topsoil and the fact that it rains.” Let’s keep it that way.

Dirt: A Love Story. 36 Writers Get Down to Earth

Maybe I shouldn’t have eaten so much dirt as a baby, or licked the adobe walls of our house so often, but dirt tastes good. Pueblo children that grow up in the old villages know which houses taste the best.

Then it was our mother’s clay . . . ummmm. Mixing dry clay and water to lay out, thickening it to form vessels, I licked my fingers like it was cake batter. Letting the wet clay dry on my hands, I watched while it cracked. My skin looked a hundred years old at age ten! So cool!

No wonder dirt became my voice, my first language. Words couldn’t make sense the way clay could. It molded around my thoughts and feelings perfectly transcribing them into human forms. I found a language out of the dirt that went far beyond words. I sculpted what was happening to me in clay figurines. The clay picked up the slightest turn of a head or glance of an eye that held information all humans understood. It would take a novel to explain what those gestures meant. This clay language goes directly to the source of our human souls.

Sometimes I banged around the farmyard on the heels of my cowboy boots, seeing if I could make it the whole way between the shop and the house without lowering my toes. Sometimes I went barefoot. My toes gripped the hard-packed clay, spread over its knobby surface, and, brushing back and forth, managed to raise a powder. One summer I wore sandals, little pink-soled princess things with glitter embedded in the clear plastic uppers. Wearing them, I felt the stir of silk and lace about me, and I danced in the dust of a fairy’s wand. All I was really clad in were jean shorts and one of the sleeveless blouses my mother made for everyday—my tawny, blond furred skin marred by scabs and scrapes and my spindly legs and arms streaked in watermelon juice and horse snot.

I’ve spent forty years getting the connection straight. I didn’t come from Adam’s rib but from the clay, just like him. I didn’t need an interpreter to talk to God. My body rubbed against the dirt of that farmyard when I began to crawl.

I know a little bit about dirt. I have a dirt floor in my house. Not kidding: three layers of poured mud, cracked out, patched with mud again so it looks like flagstone, treated with mineral spirits and linseed oil. It has the texture of rough-out leather and looks like a night sky if the night sky were kind of muddy: the bits of chopped straw I mixed in with the mud are flecks of gold like sprays of stars if stars were partially made of old hay. A mud/hay universe.

Also, the little chest-high wall between the kitchen and the woodstove is made of dirt. It steps down in a flowing cascade, one-two-three steps like a desert mesa. Dirt bricks that capture and hold the heat from the stove and radiate it back all night. You can’t tell, you might think the wall is made from 2 x 6s because it is covered with stucco, cream with a touch of pink, like the inside of an old adobe church, but nope, it is real dirt under there. On two of the steps are wood decoys of loons, black and white with little muddy red eyes. Yep, eyes like mud. The decoys look like they are swimming over a waterfall.

The wall in back of the kitchen, and interior walls of the two bedrooms, the deep window sills, and the outside walls that are eighteen inches thick? They are all dirt.

After living in this house on and off for many years I wonder why everyone in Colorado, in the whole dry West, doesn’t live in a dirt house. Because a dirt house with windows on the south side never freezes. No matter what.

I wake sometimes having dreamt of dirt. All night long stories rise up from vast expanses of gritty soil, landscapes that read, to me, like hieroglyphics, like love notes, like survival tales, like novels. When I look down at my feet, the earth becomes a pop-up book, a 3D world surrounding me with animals I know well, and others I’ve never met personally, but whose stories I read like the tales I loved as a kid, the ones where people walked with wild beasts—rabbits, deer, foxes, mountain lions—and we all shared a language, because we do. It’s the language of dirt.

Every life leaves an imprint. Imagine the earth, then, like a fist that holds your actions and the actions of every living thing. When you learn to read dirt, you walk into the forest or across a city (yes, there are imprints there, too), and the fisted world opens up like two palms holding a book of the best story ever told, because it is every story ever told—if you know how to read dirt.

Patrick de Freitas owned and operated Waking Owl Books, a bookstore just west of the University of Utah for 22 years. He’s also been very involved in the initiation and startup of several organizations including three philanthropic foundations, a summer-stock theater company, an archival and record keeping service, a citywide volunteer tree care program, and a biotechnology company. Patrick was born and raised in England and, for reasons that are sometimes unclear to him, lives in Salt Lake City.