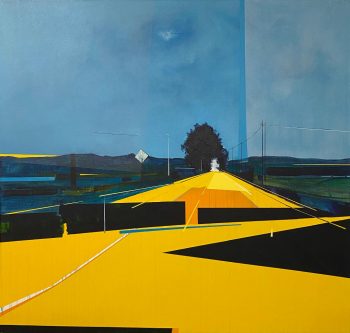 The ongoing series Lost Landscapes reflects on observations of freeway systems and the analysis of forward movement. The paintings attempt to recreate the structure and experience of the urban landscape from the perspective of a body in motion. Kozyrev was greatly influenced by Russian Constructivism and the Bauhaus. Kozyrev explains, “The environment along the freeway structures is essentially lost for the driver in the fast movement of the vehicle, because the driver’s attention is always directed forward; the landscape disappears on either side of the driver, and only fragmented elements of it imprint in the driver’s memory.” As one’s pace quickens, the visual experience quickly dissipates from detail to generality. The scattered elements flash in the viewer’s memory.

This current artistic exploration was born from Kozyrev’s experience from the constraints of the pandemic. Without the ability to travel, Kozyrev adjusted by turning to virtual existence, exploring the landscape of social media. For his most recent work, he reclaimed the travel he lost by drawing inspiration from the collage of images from friends, acquaintances and colleagues spread around the world. This new body of work has the added contradiction; while populations have been required to be stationary, personally one is able to travel much further distances virtually. These paintings invite the viewer to these distant destinations and welcome a disjointed appreciation for new sights.

Dimitri Kozyrev was born in 1967 in Leningrad, USSR. He moved to the United States in 1991. Kozyrev received his MFA from University of California, Santa Barbara in 2000 and his BFA from Ohio University in 1997. Since then Kozyrev has had multiple solo shows at Cirrus Gallery, Los Angeles, Mark Moore Gallery, Culver City, CA, Benrimon Contemporary, NY, NY, David Richard, Santa Fe, NM, Gulf Coast Museum of Art, FL and Breese Little, London, UK. He has also been in a number of group shows at museums and galleries in New York, Chicago, San Francisco, Dallas, Tucson, Houston, Amsterdam, London, Krasnoyarsk (Russia). Reviews of his work have appeared in The Los Angeles Times, The Chicago Tribune, Artweek, Artforum, Huffington Post, Art Itd., Artinfo, Wall Street International and many online publications. For the past ten years he was a Professor of Art at The University of Arizona, Tucson, Arizona. He lives and works in Salt Lake City, UT.