Dick by Jane: Kristi Hager & the Female Gaze at WSU 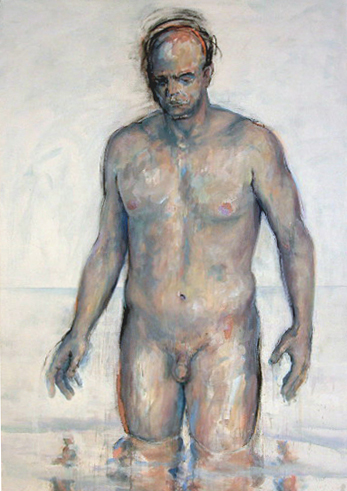 Driving down from a faculty gathering, to a weekend drawing workshop. Ogden, Utah, to Helper, Utah. Over the pass with a full moon and me with a skylight in my reliable car. I smile most of the way there. I am late and when I pull up in front of the tall windows of the Studio Group Building, which look out onto the quiet main street of Helper, they are blocked out with paper. I enter the front doors into a huge and dark studio space which holds, at its center, a circle of reverent and working artists. They radiate out from a platform in the middle. Then I see him. Raised high on a model stand and lit with a warm light, is the most beautiful man I have ever seen. He is studying to be a neuro surgeon. Modeling is his day job. He is buck naked. He is jaw-drop, drooling-mouth good looking. He is get-run-out-of-town-for-falling- in-love-with-your-model (an occupational hazard for figurative artists) manly man handsome and then some.

Later, on the back porch, exhausted from making art, several of us girls are speculating about women’s access to formal drawing skills. Hasn’t it changed over the years and haven’t women been celebrating the male nude as subject matter for awhile now? Is the female nude more beautiful then the male nude? We had just seen a whole lot of evidence to the contrary. Would we, as women, paint or draw the male nude with the same concerns as a man would? The questions started to swirl and the idea of an exhibition, “You’ve Got Male” was born. It was then briefly named “Dick by Jane,” and now, The Female Gaze, due to open on October 22nd, at Weber State University’s, Mary Elizabeth Dee Shaw Gallery, Ogden, Utah.

Kristi Hager, who will be showing with Jen Davis and Patricia Kimball in this exhibit, is a Montana artist who has been working with the male nude as subject matter for some years. Hoping to provide an alternative to the objectification of the nude, Hager avoids approaching her models with the eye of the voyeur. Instead, Hager poses the model on a raised platform so that the point of view is not from above. This has the effect of leveling the playing field between the viewer and the subject. She works with the model to find a pose that implies self-determination and agency. This effectively rejects the tradition of the passive, “I am here to be looked at” nude. Hager’s larger than life figures move in water, a kind of baptism into the world of the spirit in the body. She explores the relationship between sensuality and spirituality, commenting on the idea that the two are not irreconcilable. Hager’s images are compassionate and powerful.

The other two artists in this exhibit do not focus uniquely on the male nude. The Female Gaze began as a national call for entries from female artists who depict the male nude in their work. Due to website address snafus and a subsequent low number of entries, the exhibition has evolved into the present three-person exhibition exploring the nature of the female gaze on the human figure. Local artist Patricia Kimball explores the clothed figure in her paintings, drawings and prints. Photographer Jen Davis’ gaze is an autobiographical one, viewing herself in everyday settings to see how the world views her.

I am excited to see the work of all three of these fine artists, but my mind is still drawn to that wonderful drawing workshop and the conversation it sparked. I have had many similar conversations regarding the idea of women working with the male nude as subject matter since then. We have the feminist theory of the male gaze being the objectification of the female. We have our taboo of the human form. We have the figure being one of the hardest subjects to excel at. We are very complicated forms and many artists, these days, do not want to do the work of learning to do it well. 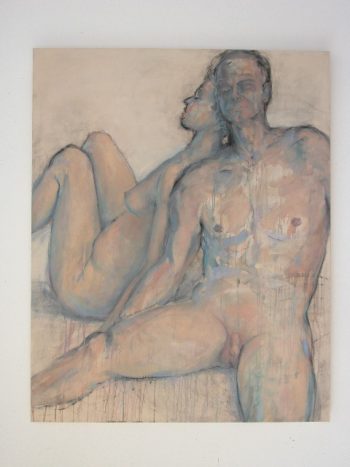 The question that I am most often asked is whether or not the female nude is more beautiful then the male? In my personal wrestling with using the male nude as subject matter, I feel that the female form has nothing on the male. As a figurative artist, I can see that the female nude is beautiful, but I am attracted to the male body in a way that I am not with the female body. My guess is that the effect of that would get into how I am painting. I look forward to one day finding more women who are celebrating the male nude as subject matter and contributing to that kind of work myself.

The Female Gaze will be at the Mary Elizabeth Dee Shaw Gallery October 22 – December 14.