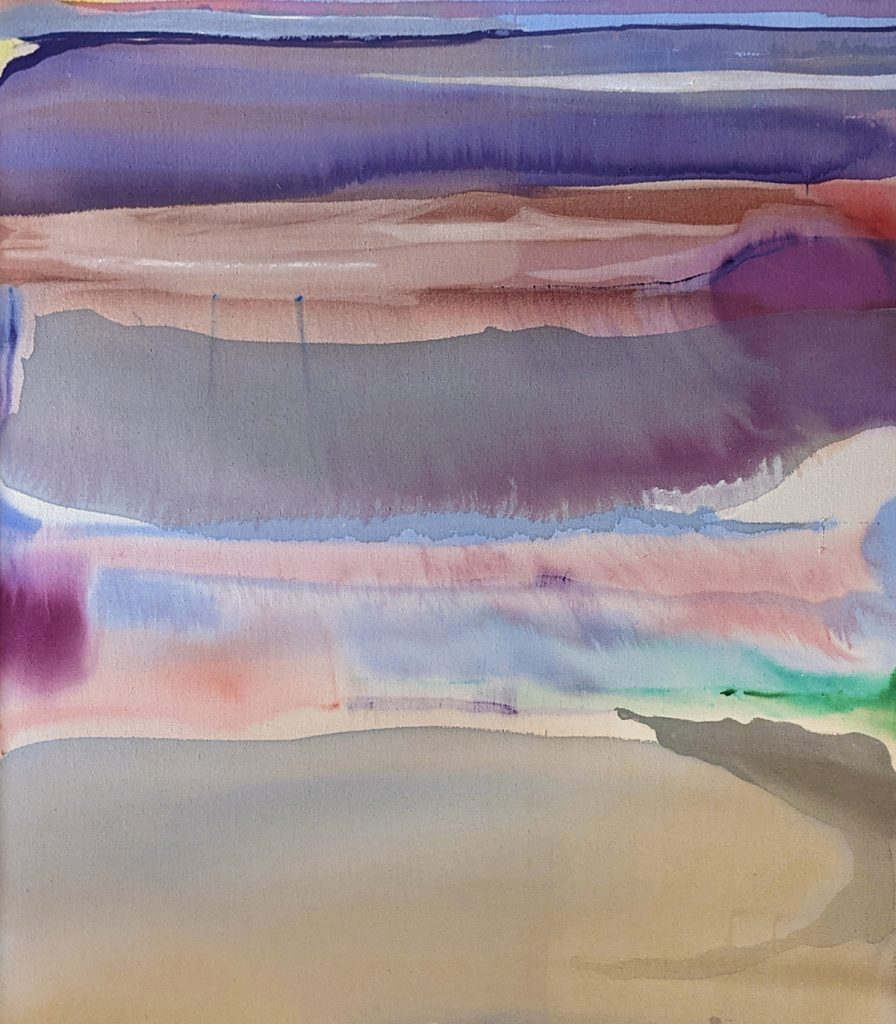 “WHO did THAT?” I ask, stopped cold by a large, just-hung abstract in rich, compelling colors – peaches, browns, grays, and a variety of blues and violets – hanging behind the front desk at Phillips Gallery. “That is a Bonnie Phillips,” replies Bonnie Phillips in a small voice.“It isn’t signed, but they tell me it is mine, and I can’t argue,” she adds with a smile. This revelation is but the first of many surprises I will have while touring the Dick and Timmy Burton Collection, an unforgettable estate sale at Phillips through Oct. 8. Bonnie Phillips’s paintings are scarce, but the Burton show has three — the one large abstract; the others are small, and one is surprisingly representational.

Hanging next to the Bonnie Phillips’ abstract is the delightfully painted and titled “Mixed Marriage,” Maureen O’Hara Ure’s painting of a clearly satiated recumbent lion smiling at a somewhat ruffled, red-feathered exotic bird opposite. Makes me happy. Makes me wish I had money. 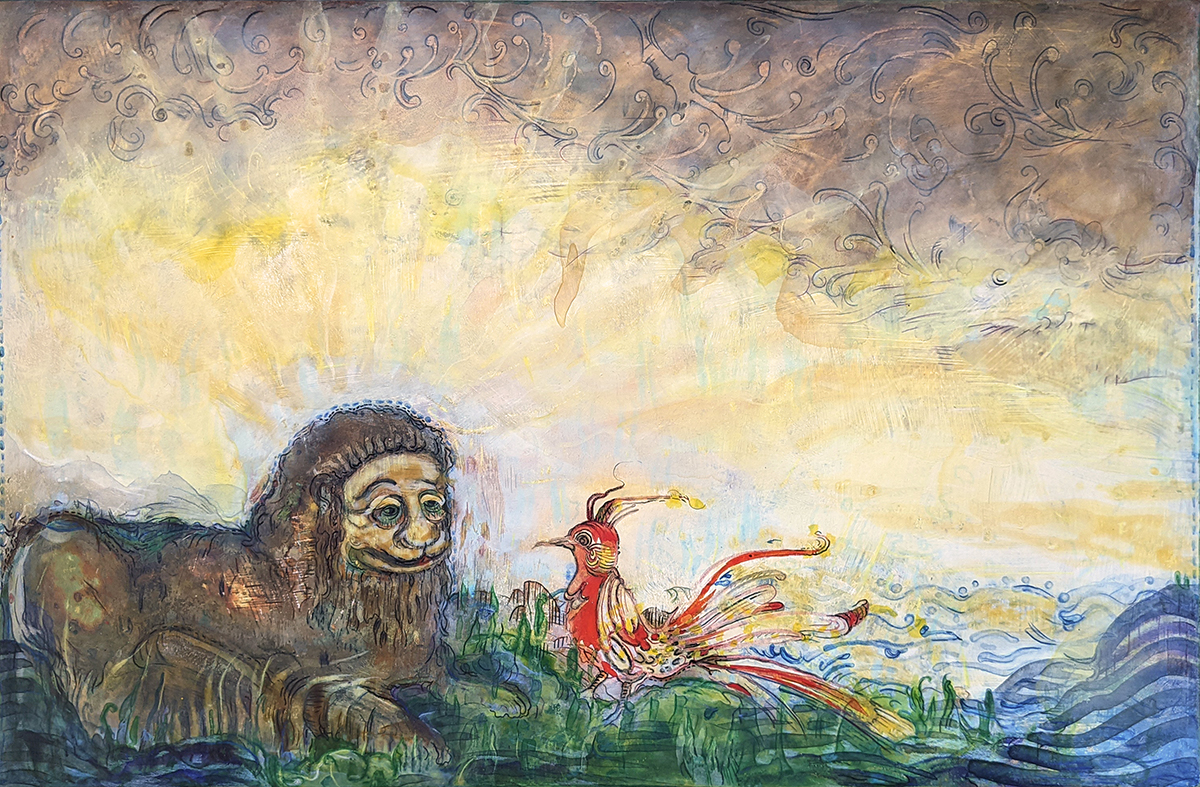 The Burtons only collected the best of the best, that’s manifest looking around the gallery, something I have done several times recently to view this remarkable show:  excellent, even extraordinary Utah art combined with Richard Burton’s fascinating, you-are-there photographs, the latter hanging in a ribbon pattern ringing the gallery horizontally; other work runs vertically down through it — a terrific design by gallery director/curator Meri DeCaria and fine art consultant Hadley Rampton.

Dick Burton and Susan “Timmy” Dinwoodey Burton weren’t just rich art collectors with a shrewd sense of what was timeless: “They were artists themselves,” says author and artist Teresa Jordan who dined several times at one of the Burtons’ two art-filled homes (one in Salt Lake City, the other in Heber) with her folklorist/musician husband Hal Cannon, who fronts the cool “desert music” group 3hattrio. “I think they wanted to not only support their own aesthetic life but really wanted to support artists,” says Jordan, who has a show opening at Phillips in April and a monotype in this show titled “In Flight.” She recalls, “When I was turning to visual art, they bought two or three pieces and it really meant a lot to me. And they did that for many artists. Having a vibrant language of community and creativity was important to them — in Salt Lake City and Utah. Bonnie and Denis [Phillips] were so important to them [in fulfilling that commitment].”

Timmy Burton was a chef who had a catering business for 25 years. Jordan recalls that her food was intriguing as was the way she dressed: “She was a textile artist and always wore something interesting to look at. Dick was interested in music. He had a very good eye and a very good ear. He was interested technologically in the mixing and recording of music. Dick was also interested in supporting storytelling in rural communities … in getting the voices of unheard people to tell their stories. I think that Timmy was more social than Dick: He liked one-on-one conversations. Timmy was involved socially in bigger groups; Dick was introverted.” 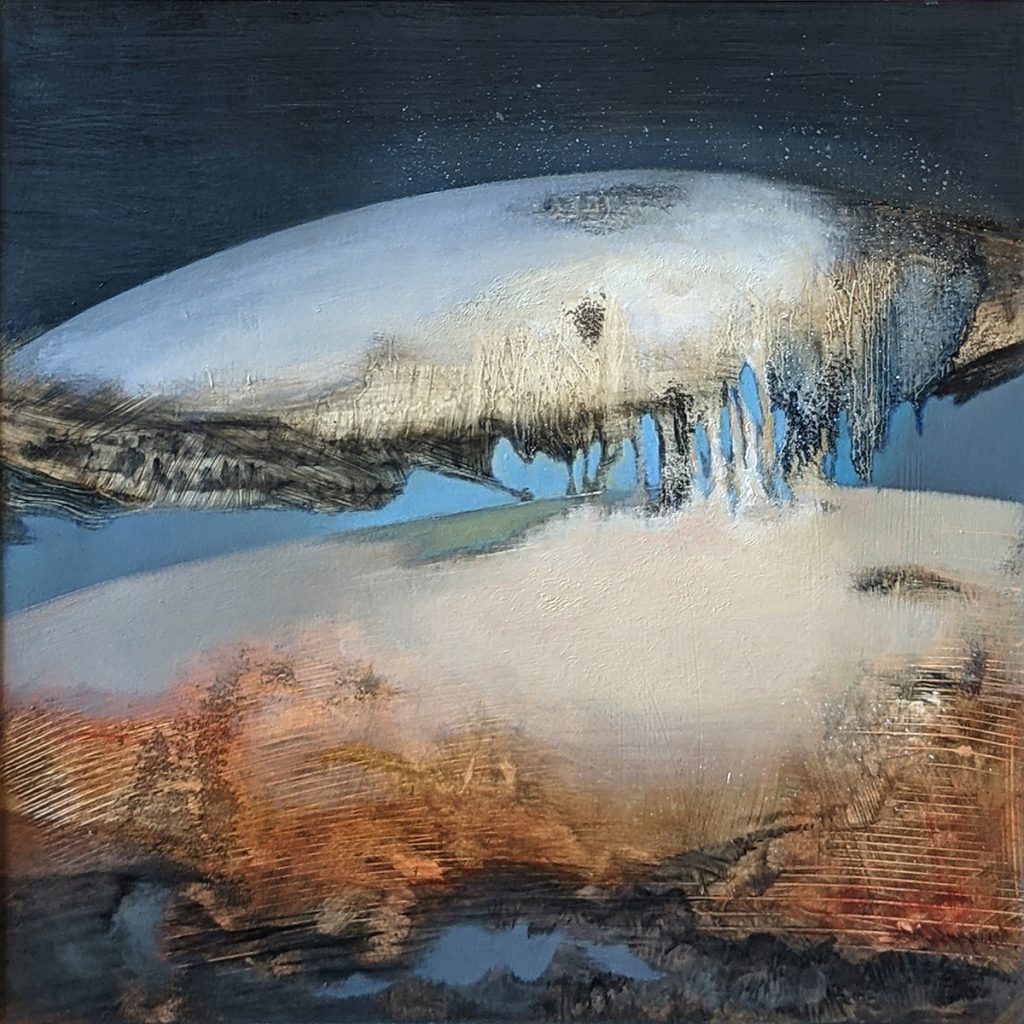 A stack of terrific Hadley Rampton watercolors commemorating her travels greets you on entering the main gallery (sorry, Rampton aficionados, nary an aspen to be had); there is a worthwhile Susan Fleming oil on paper titled “Connection” (from the Space Series), and an untitled Julie Connell from 1989 – lots of old friends to be found on these walls.

I had strolled right past a brilliant George Dibble watercolor and didn’t recognize it as his at all, yet I worked alongside Dibble for years at The Salt Lake Tribune, have even curated two shows of his work – but this one escaped me entirely. It’s an unusual, for Dibble, rendering of a mansion occupied for 20 years by George Dern, once governor of Utah. 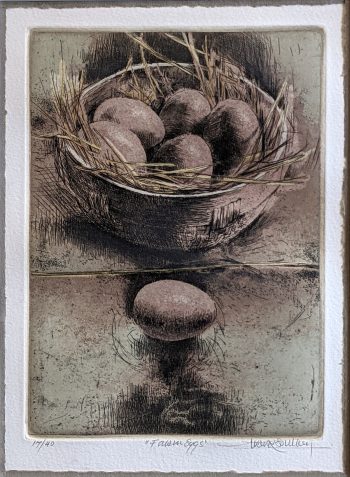 I guess I missed the Dibble because of the Trevor Southey etching of a basket of farm eggs; or maybe it was the lovely and colorful Don Athay oil pastel on paper titled “Picnic Ground” that seems more an imaginative and enticing walk through the woods than a place to settle with a basket of edibles. There’s a killer Francis Zimbeaux of sailboats docked on the Great Salt Lake. Also on the water, this time in Portugal, is an unusual work by Doug Snow that, naturally, sold immediately, as did the lush Earl Jones in the next room.

A spellbinding Denis Phillips from the late ‘80s titled “Spring,” 44 x 48 in. acrylic on linen, holds the tangerine-painted south wall in the East Gallery, its colors coordinating perfectly with its backdrop. A fluffy white cloud formation above a craggy multicolored mountain range implies light rain, perhaps, causing the greening of the plains beneath. This painting brought tears to a friend’s eyes, not only to mine.

Sharon Alderman’s “ . . . In Four Movements” must be seen to be absorbed. An undulating cotton fiber double-weave in four sections of checkerboard squares done in mostly neutral colors, it takes one’s breath away.

And Meri DeCaria’s delightful work, four pieces, as I recall, is mostly sold out but should be seen before it goes to new homes. It is top-notch DeCaria with titles like “Way Out,” “Burst,” “Blast,” and “Save It for the Gravy.” 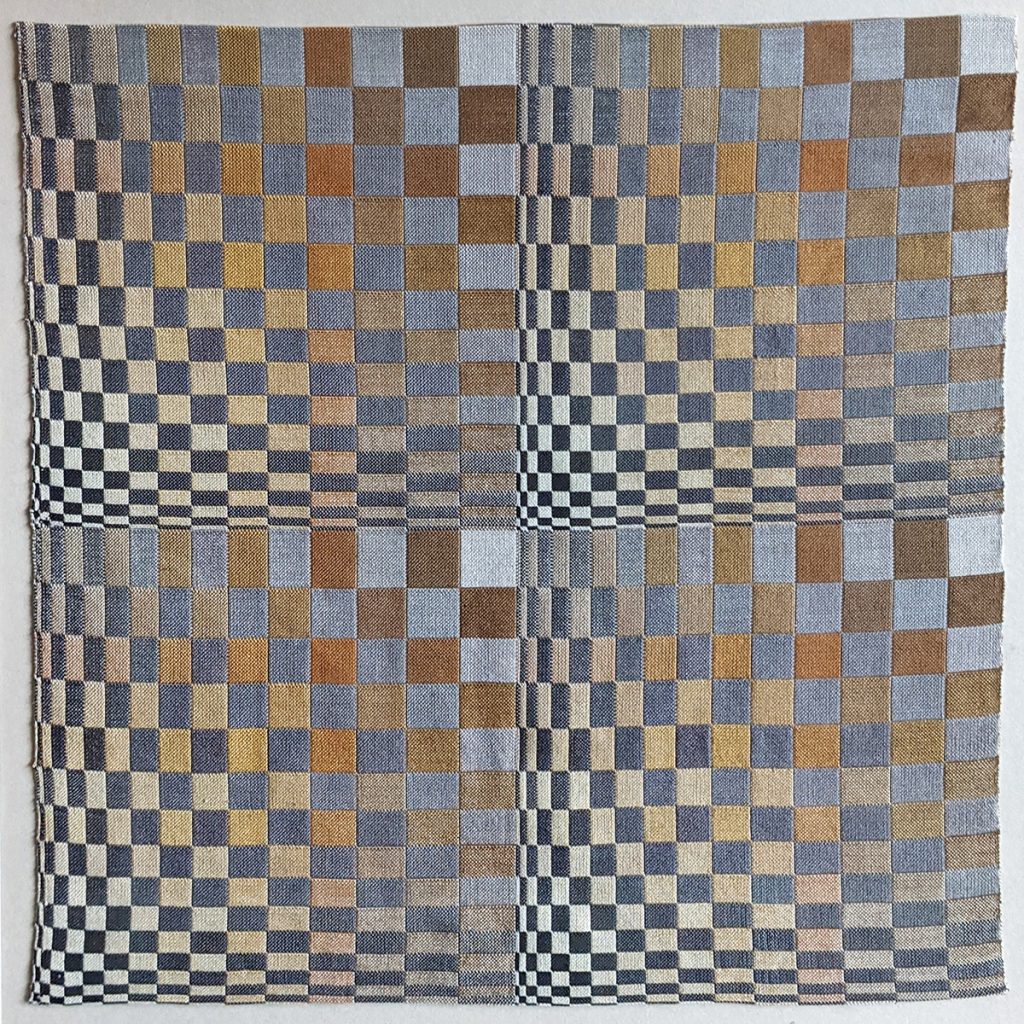 Joseph Marotta’s haunting narrative photograph, small and perfectly framed, is easy to pass by but don’t miss it – hung by the Julie Connell on the wall near the front desk and door to the frame shop. Taken in 1976, while Marotta was an MFA student at Arizona State University, before he became a professor and head of photography and imaging at the University of Utah (a position he relinquished a year or two ago to artist Edward Bateman),  it is an untitled portrait of a room at the Luhrs Hotel in Phoenix. It “was in pristine 1920s condition,” says Marotta, who “stayed there a number of nights before it was demolished in 1978.” It is proof that every picture does, indeed, tell a story, when shot by a visionary photographer.

Marotta remembers that “Dick Burton was a genuinely nice person, who cared about people and the natural environment of Utah. Soft-spoken, but came alive when photography was the subject. He was a serious collector of photography; if you wanted to see original prints by photographers you’d only read about, you’d go to the Burton’s home. … He was also a fine photographer. Well-seen, well-made images in black and white, though he did some color. … He was a traditionalist, of the straight school of the medium. Edward Weston, Dorothea Lange, and Cartier-Bresson come to mind. He loved discussing photography and making photographs. He was passionate about both,” says Marotta.

Artist Adrienne Winter, framing and sales consultant at Phillips, recalls Burton when he came into the gallery as “the kindest man, quiet, thoughtful. I was young then and thought he seemed slow, but it was really just that he was thoughtful.” 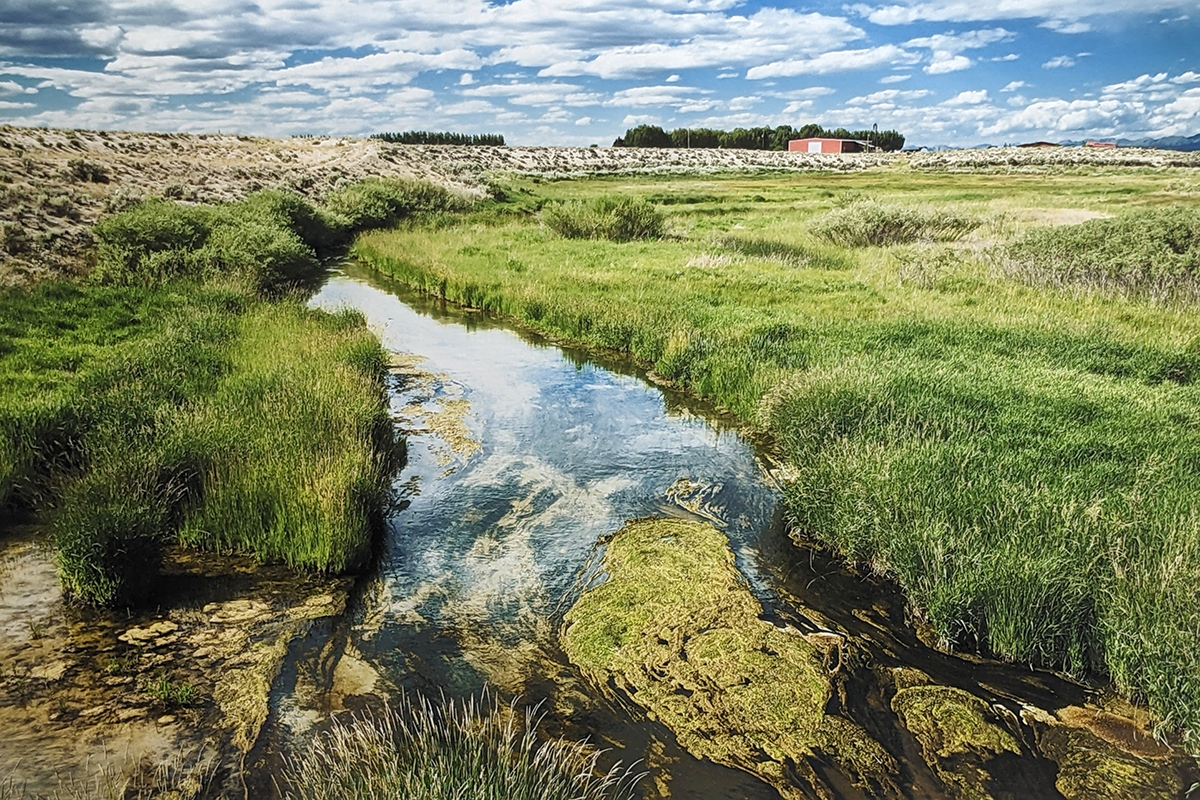 Denis Phillips, Burton’s friend of some 40 years, says the dedicated photographer and philanthropist was “a balanced person with many interests. We talked about sailing, motor homes, about art all the time. He took a lot of photos of Highway 89 and had acres of land in Heber — and a tractor.“ Phillips mentions the standout photograph by Burton that hangs by itself on the north wall between the windows: a captivating self-portrait of the photographer kneeling by water’s edge, complete with a Peter Pan shadow, probably the best of his work in the exhibition. There are some excellent forest scenes, and he captures snow-covered fields beautifully, but this image makes one gulp.

Sadly, after 56 years of marriage, Timmy Burton died of injuries sustained in an automobile accident on July 6, 2018. She had graduated from the University of Utah in 1964 with a Bachelor of Fine Arts in Painting and Drawing and was a lifelong, active artist. She was a member of the Utah Surface Design Group, The Mary Meigs Atwater Weavers Guild (see our article here), and The Utah Sewing Guild. She had been a board member of the Utah Museum of Fine Arts. 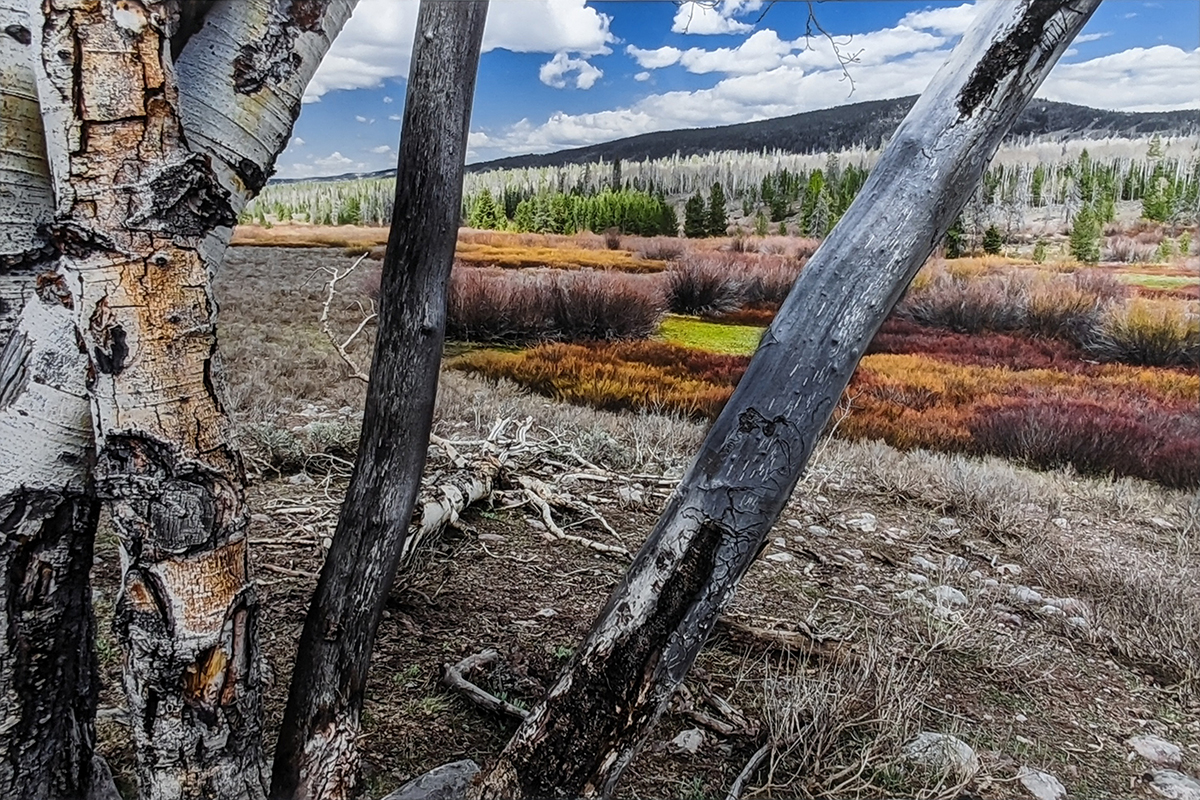 Dick Burton, who graduated from the University of Utah Business College, began his career at the investment division of First Security Bank but left to study photography at UCLA, teach the subject at Utah State University and the Salt Lake Art Center, and would pursue his passion avidly for most of the rest of his life. He was also an accomplished skier and mountain climber who raced motorcycles and loved piloting his Cessna and Piper Cub aircraft around the Western states.

He died Dec. 29, 2020, after a fall in his home. According to his wishes, Dick Burton was cremated, and his ashes were buried next to Timmy’s in the Salt Lake City Cemetery.