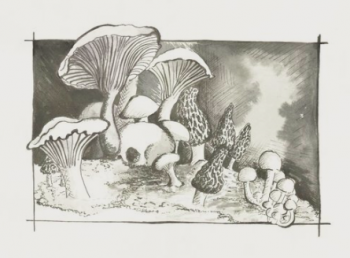 I arrived at Deseret Experimental Opera’s new creation, The Mushroom Murders, in the aftermath of a rainstorm this past Wednesday. As the audience waited on the porch of the Fort Douglas Military Museum, the cast and crew quickly reassembled the performance — intended to be outdoors — for a staging inside the museum. Those of us milling about were treated to a dramatic sky and a series of impressive rainbows stacked against the rainy foothills.

The Mushroom Murders tells multiple stories. Sometime after the Civil War, a Black regiment of “buffalo soldiers” arrives at Fort Douglas to keep an eye on the Mormons, to the chagrin of a Utah senator. The soldiers encounter a series of mysterious murders that share in common the presence of mushrooms at the scene of the crime. In the present day, Emerald, a Black journalist from out of town (Kaushay Ford), and Sterling, a white Salt Lake-native and podcaster (Spencer Ford), attempt to re-examine these fungus-fueled killings. And they end up falling in love, at least for a scene or two.

As we circle the museum, we eventually find out that Sterling may have drugged Emerald with mushroom tea, and that he’s a descendant of the segregationist senator. Sterling is looking for some kind of intergenerational reckoning through his relationship to Emerald, who herself is related to some of the long-gone soldiers. Along the way, a trail of victims’ bodies (willing audience volunteers) is attended by a corps of singing dancers dressed as a menagerie of mushrooms, bound to serve an evil queen — think weird-sisters-meets-Hair.

Sequestered between rooms, composer Wachira Waigwa-Stone provides succinct, cinematic musical transitions. The music and other audio, which includes a playful fugue rendered from a podcast by Sterling, is the strongest element of the evening. Another highlight is a series of recitatives delivered by Emerald as one-sided phone conversations with her mother. The plot might have been better understood if this device, ably rendered by Ford, had been deployed more than just twice.

By the time we arrive at the final scene, the gleeful mushroom minions are finally joined by their boisterous (drag) queen — Ivy Dior Stephens — who seems to take Emerald’s side in a final confrontation between the leading couple. “Yas!” cries one onlooker, awkwardly, as the cast gives their all to the chaos of the show’s finale.

I didn’t know about the Black soldiers stationed at Fort Douglas. I wish the evening had taught me a little more about them. (More local research efforts can be explored here.) The Mushroom Murders read as a series of preliminary sketches. I’d love to see a fuller version where the creators committed to just a few of the more successful strategies they work-shopped in Wednesday’s performance, and perhaps clarified for themselves what they were setting out to say.