Back in school we learned that a line has one dimension: length. A plane measures two ways: length and width. Space, of course, has three dimensions. Art schools tell us that if it has three dimensions it’s a sculpture, while if it only possesses two, it’s a painting. The sculptures of Matt Devine have three dimensions, to be sure, but they don’t fill space any more than a painting does. They measure it, they interact with it, they could be said to play with it. They do so using component parts that have only one or two dimensions. While Devine very much likes the qualities of metals, their strengths and working properties, he also likes being able to use them like he would paper. In fact, several of the pieces in his half of Nature and Industry, a two-person show at Julie Nester in Park City, initially recalled some of the paper sculptures of Lenka Konopasek, though the resemblance is fleeting. The two artists aim for very different effects. 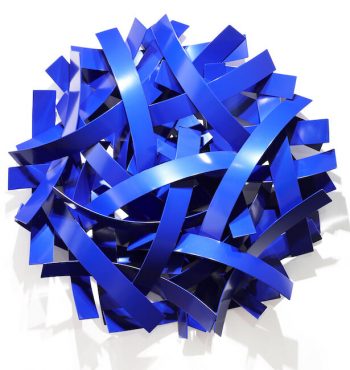 In two of these wall pieces, Devine also conjures and beefs up the familiar paintings of Jackson Pollock, with their networks of tangled drips that appear to circle about, passing over and under each other like the neural networks of a human brain. Unlike those liquid drips, Devine’s ribbons maintain their individual integrity, their spring-like, tensile energy, resisting not only gravity but the fatigue that should come with the work they do. In “This Way #8,” the title suggests these are not just ribbons, but arrows or pathways, collectively claiming like a car’s GPS to know the best route to any destination. “Ebb and Flow,” a rectangular tangle where “This Way #8” was round, offers pieces with a shorter, wider proportion: white slips like so many cookie fortunes, rather than roadways that emerge here and are reabsorbed elsewhere. These might not comment on the dilemmas of our day, but they bring out the positive qualities of their familiar subjects, reminding whoever sees them that solutions do exist and that secrets are seductively engaging. In three “Haystacks,” hung here in a vertical array, the same shapes radiate from a central hub, suggesting an aerial fireworks display, or a trio of flowers.

Powder coating is seen on everything Devine shows here, and is part of his meticulous construction technique. He likes to subtract the apparent weight of his material, its limitation by gravity, and to that end has technique is just about flawless. Despite all the encounters between leaves of aluminum or steel wires, nothing so physical as a spot of chipped or sagging paint nor a welding scar can be found.

Also on the wall are a couple of wire pieces, augmented by one on a pedestal. “Happy Shiny 2” confirms that playfulness and humor do not lie outside Devine’s brief. This typhoon of frozen lines once again hints that not only is there light at the end of the tunnel, but if we only walk around, we will soon learn that the light shines at both ends. While these rigid rods are straight, those in both “110.6 #12” and “100.6 #14” form esses and crescents. They also cast shadows on the wall that double the number of curved lines contained in the work. It should be clear that just because words like “fortune cookie slip” or “haystack” help visualize what’s here, it doesn’t mean the objects depict those things. More likely, they work on an organic or at least unconscious level to create feelings similar to those brought about by warm sunlight and a lack of troubles. To borrow from Aristotle, the sculptures are the potentially excludable middle between the viewer and all the past and future pleasures they suggest—beginning with their colorful selves. 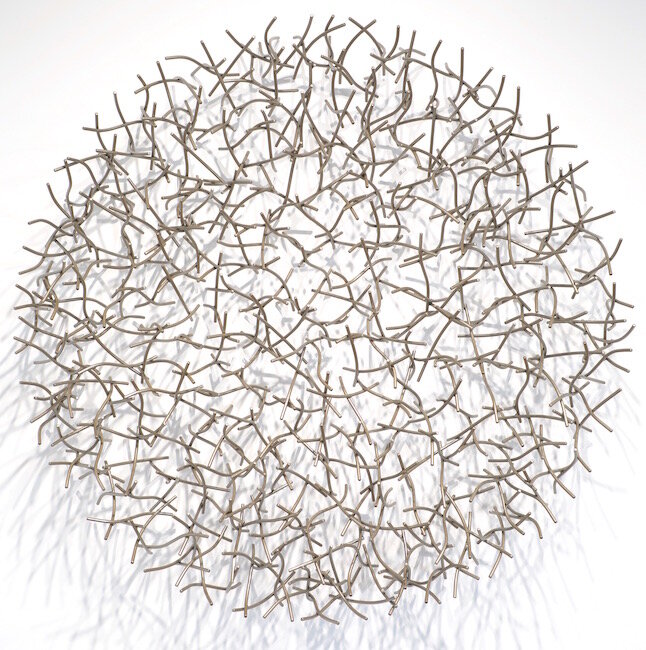