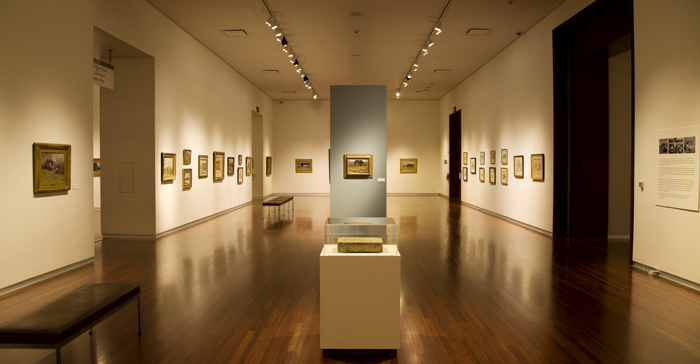 LeConte Stewart: Depression Era Art, now on display at the Utah Museum of Fine Arts, is a wide assemblage of paintings by the Utah master focusing on the years of the Great Depression. Unlike its partner exhibition at the Church History Museum that shows only landscapes, Depression Era Art offers a wide variety of subjects related to Stewart’s personal experiences of those years in Utah. Though the museum presents these works as emblems of a dark era — “Stewart painted the ‘raw side of life’ in expressions of the West’s vernacular architecture: storefronts, gas stations, and old homes. Stripped to the essential, paintings from this period evoke not only Stewart’s personal history of loss, but that of the entire nation…” — I would argue that if one is to take a more penetrating look at the meanings of these works, at the visual clues in individual paintings and also at the group as a whole, one finds a different LeConte Stewart: these paintings evoke a fighting spirit of unity with the common man, of industry and will, and ultimately of God and humanity in the face of oppression. 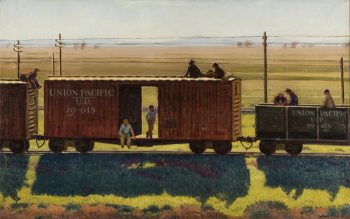 The great masterpiece in the show is arguably “Private Car,” from 1937, a piece that evokes the spirit of the common man. One of a handful of finished pieces that is paired with its initial studies, “Private Car” looks beyond the vulgar ideas of the “hobo,” as Stewart seems to be presenting a romanticized version. Here are the migrant workers at the height of the Great Depression, but in this depiction they seem neither depressed, oppressed nor repressed, sailing along in their “private car.” Stewart paints the scene in a cheery sea of yellow and the men look like adventurers; one of them stands with his legs crossed seemingly proudly. They seem to be occupied with each other or in thought, free and moving forward under an open sky. Stewart venerated the common worker and saw a dignity and purpose in what they did. “The Thresher,” painted seven years prior to the crash, is not unlike French Realist Jean-François Millet’s “Gleaners,” 1857, and shares a similar tone with “Private Car”: it’s a cheerful and busy canvas, colorful and alive with man, nature and work, all happily in unison and everything apparently harmonious from the glorious sky, to the billowing smoke and the blur of human activity. The small faceless figures in their “private car” and the blurred workers in “The Thresher” are the heroes of the show. 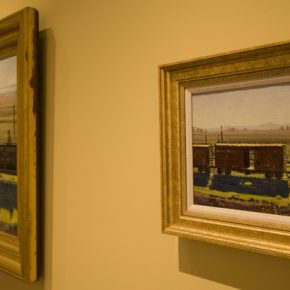 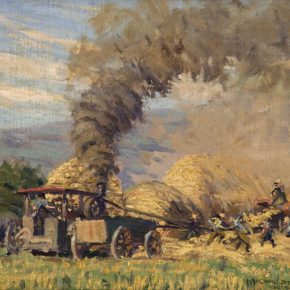 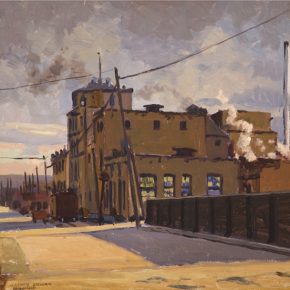 In fact, looking at Stewart’s paintings of the ’30s it’s not always easy to see that there is a Depression going on. There are some paintings of shuttered buildings, but for every one of these there is a vision of work and industry. In “Odgen, Becker Brewing” from 1933 it is the heart of the Depression yet we notice the multiple active smoke stacks, the trucks parked in front of the factory, the brightly painted dusk or dawn. Nothing Stewart painted was gratuitous and everything can be read for content and here what we are seeing is industry at all odds.

Even more lavishly painted with overtly suggested scenes of commerce and industry is “Along the Concrete,” where we see the artist focusing on the best of times and not the worst. Of course times are hard, of course this is the worst economic disaster in United States history, but LeConte Stewart chooses to paint and promote commerce and industry with a bright red Coca-Cola sign, a car being pumped full of gasoline by a uniformed attendant who is working! The painting is littered with signage all under a bright sky and another car moves on ahead. There are a number of other paintings like this in the show that focus on commerce and industry and here Stewart abandons his signature isolation to a near claustrophobic state. There is a painting in the show of empty storefronts but this is boldly and brightly rendered in a vivid green which does not feel empty or hollow. Stewart was making artistic choices here about what to paint and he was a humanist in the traditional sense of the word as he shows the best of mankind in the face of adversity.

The exhibition is peppered with a number of houses or buildings, sitting in isolation. Yet, as is readily apparent in a number of these landscapes and ones currently on view at the LDS Museum of History, LeConte Stewart characteristically enjoyed such themes. Stewart frequently painted open spaces such as a mountainside with a single motif, such as a deserted farmhouse, thus inviting a feeling of disconnect from everyday reality. As much as being scenes of the Depression, Stewart’s views of isolated homes reflect his romantic sensibility, and the open spaces of his home state. 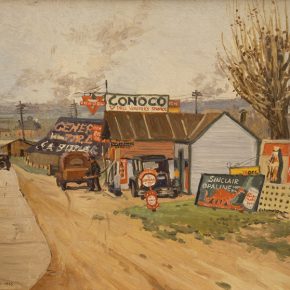 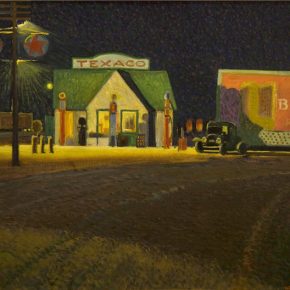 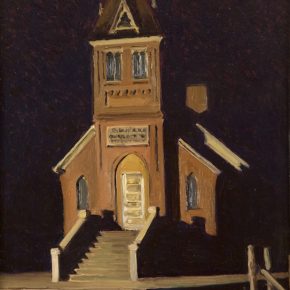 Some of the pieces in the show, such as “Death Curve,” with its bold colors and strong contrasts of light and dark, call to mind Stewart’s Depression-era contemporary Edward Hopper. Yet, in Stewart’s work,  one doesn’t feel the strong tension and anxiety of a piece like Hopper’s very famous and iconic “Nighthawks.” Yes, there is the very real presence of isolation, of a looming darkness over everything, but Stewart has a very expressionist way of painting, which Hopper lacks, that brings life into the piece. Hopper’s “Nighthawks” features the central figures in the café, surrounded by the utter emptiness of the night, the barren street and cold dark windows. By contrast, beyond Stewart’s roadside brightly-lit service station is a street lamp whose glow breaks the darkness, the automobile breaks the loneliness, and the blackness of the sky is broken up by fragments of pink in a nocturnal plein air effect that creates a sense of warmth out of the would-be panic-filled darkness of the night in Depression-heavy 1936.

LeConte Stewart was an active Latter-day Saint and so a piece like “Church Under Street Lamp” reads easily enough as a metaphoric work. Like the dark night of the Great Depression, the church is shrouded in darkness, yet the face of the church is illuminated, shining forth as a symbol of the great peace many find through spiritual means, even in hard economic times.

There are many other significant images in the show that are poignantly rendered by Stewart, but as I viewed the exhibition and asked myself, from a humanist vantage point, what is the greatest relevance I could take from this show, I found I was inspired by the Becker Brewing Company that kept on brewing, the migrant workers on their own “private car,” the gas station in the middle of the night on Death Curve that keeps its lights on and the church under the street lamp that will always have its light on. LeConte Stewart, in my eyes, did not complain or quarrel but represented the best of the spirit of this era in those who fought to survive those years. Rather than find the paintings I witnessed of the Great Depression depressing I see them speaking of a great artist and the strength of his vision. 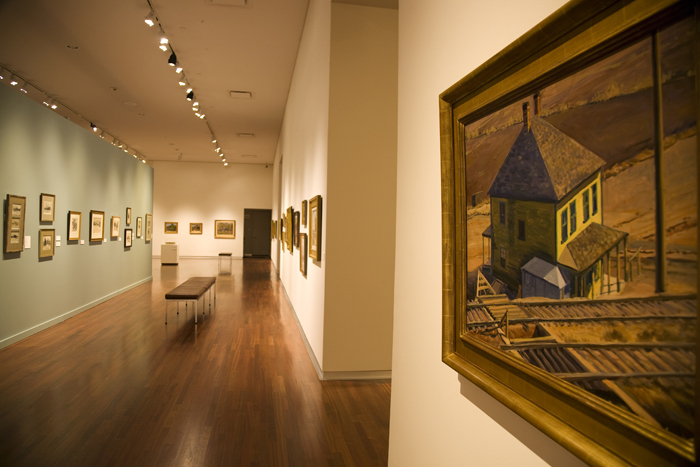 LeConte Stewart: Depression Era Art is at the Utah Museum of Fine Arts through Jan. 15, 2011. An accompanying exhibit featuring Stewart’s rural landscapes is at the Church Museum of History and Art (see our August edition for a review).