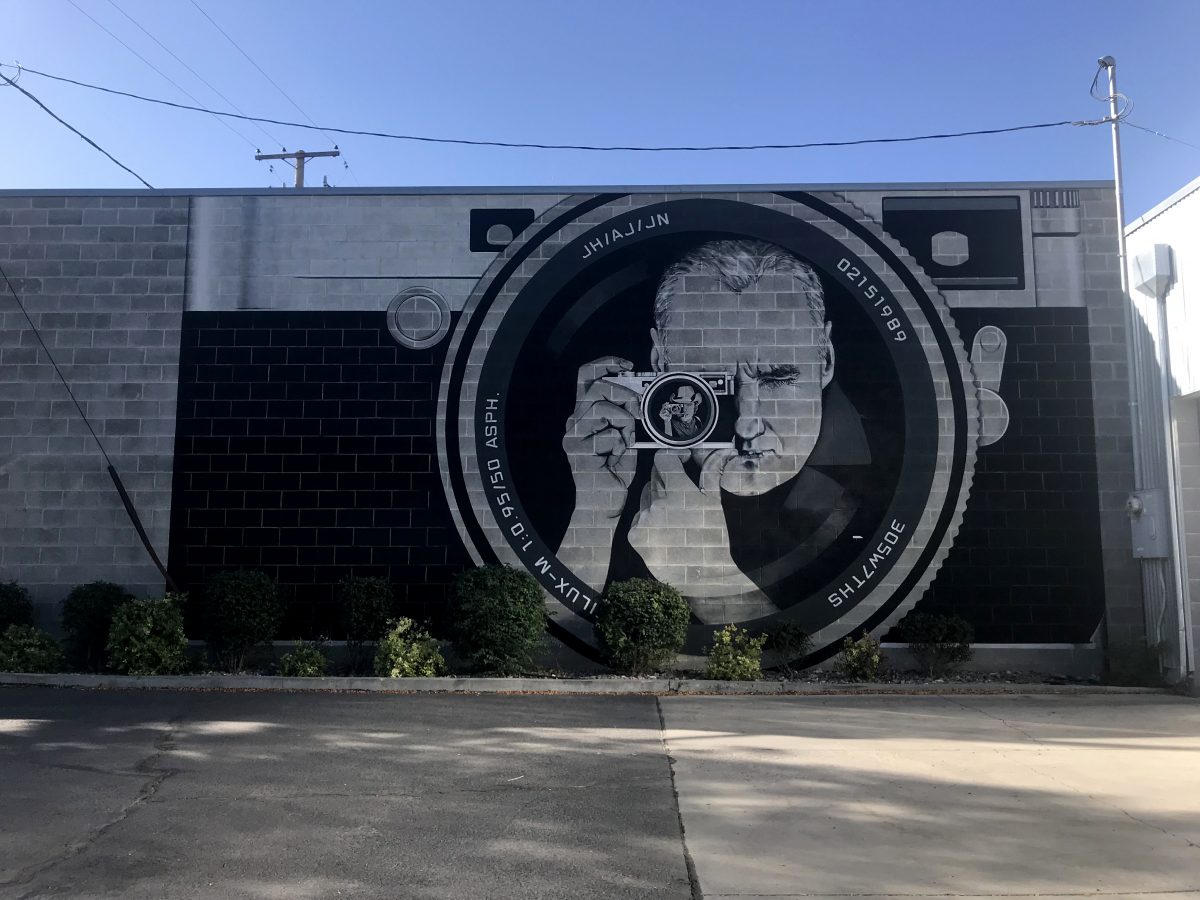 A half-mile of masking tape, gallons of exterior paint, dozens of rollers and brushes and some not-entirely-successful lessons in operating a scissor lift — that’s what it took Jann Haworth to create her recently completed mural facing the Pictureline parking lot in Salt Lake City’s Granary District.

Haworth’s is one of a number of murals going up in the neighborhood, part of a Redevelopment Agency of Salt Lake City (RDA) and Salt Lake City Arts Council project spearheaded by Derek Kitchen, who leads the RDA board of directors and represents the Granary area on the City Council. Artists who wanted to participate in the open, competitive call, funded by $147,060 in RDA monies, had to approach local businesses with their idea and get approval for the image from the owners and RDA. 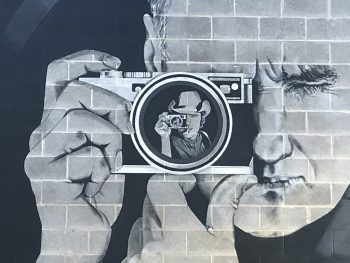 In Haworth’s case, the artist had to work both with AC Electric, on whose wall the mural appears, and Pictureline. The influence of the latter is readily apparent in the image — iconic actor Dennis Hopper is shown looking through a viewfinder at a younger version of himself, who in turn is looking at a teenage version of Hopper, who is framing up a shot of his egg and sperm. Pictureline’s Jens Nielsen also provided practical and conceptual support. “Jens came in with the scissor lift/wonderful moral support and at-value adds on two critical composition ideas,” Haworth says. She was also aided by Alex Johnstone, a game developer, film director, adjunct professor at the University of Utah and her son. “Al did some ace tech work on the photoshop work pulling all the images we wanted to use together as only he can do — with acute attention to the light sources and positioning.”

“Suffice it to say: the collaboration between the three of us was a big, big plus,” says Haworth.

This is the second mural Haworth has completed this year, but she’s not sure she has quite earned the street cred necessary for graffiti union membership: a crew of a dozen family and friends helped with the monthlong project; there was ice cream and water available; and the north-facing wall provided plenty of shade.

But if this whole art thing doesn’t work for Haworth, she’s at least developing some additional vocational skills. Sort of. “I can now drive a scissor-lift,” she says. “Except I can’t drive it backwards — I tried to take Daisy [Blake Perry, Haworth’s daughter] to her car by scissor-lift across the parking lot and didn’t realize I was in fact in reverse mode and, yes, hauled all over the place and finally gave up and she walked the rest of the way.”