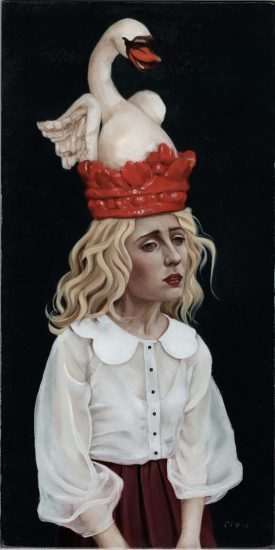 The actress, the model, the bird-girl, the queen, the naturalist — Emily Christensen McPhie’s portraits of women in her Nature as a Goddess show at David Ericson racks them all in, in a way the old-time illustrator Arthur Rackham would like, in the way Cindy Sherman the modern photographer would understand. They can be bearing up under surprising pressures: in “Intellect and Instinct” a blonde-tressed worried-looking young woman wears a lovely organza blouse and a red, rubbery-looking crown. A swan has found a way to be her presiding king: he sits on her head, within the crown. Looking more closely, you see that the crown seems to be partially formed by a collection of bright red bird-bills.

Or she can be an older woman with short hair and an expression which says she knows far more than she’ll ever tell: in two paintings, “Dunce in Disguise” and “Withholding”, this woman wears conical dunce caps. One dunce cap blends in with polka-dot designs behind her head. The same woman wears another dunce cap in “Withholding,” where McPhie has made this dunce cap crisp and white, springtime-fresh, decorated with a row of bright small growing carrot plants, and one doleful rabbit-dwarf, looking as if he is weary of his little blue jacket, his repeated springtime decorative role.

Some young women are shown either holding, or sitting at desks in languorous poses near animal/bird skulls, as in “Waiting for Everything to Change” and “Order and Entropy.” The women all seem to be thrown into reverie by the presence of skulls; two lay their heads on desks or tables alongside bones or skulls, even though in one, without its former shrouding flesh, the animal’s teeth are exposed, frightening, a revealed snarl. In “Order and Entropy” a sweet-faced young woman’s palms gingerly hold a small eyeless bird’s beaked skull. She cups her hands wide, as if to leave room for the missing remainder of the skeleton. There is a formal quality to this portrait, something many of McPhie’s paintings in this collection have: her dress is the richest of maroons, topped with a crisply-scalloped white collar. 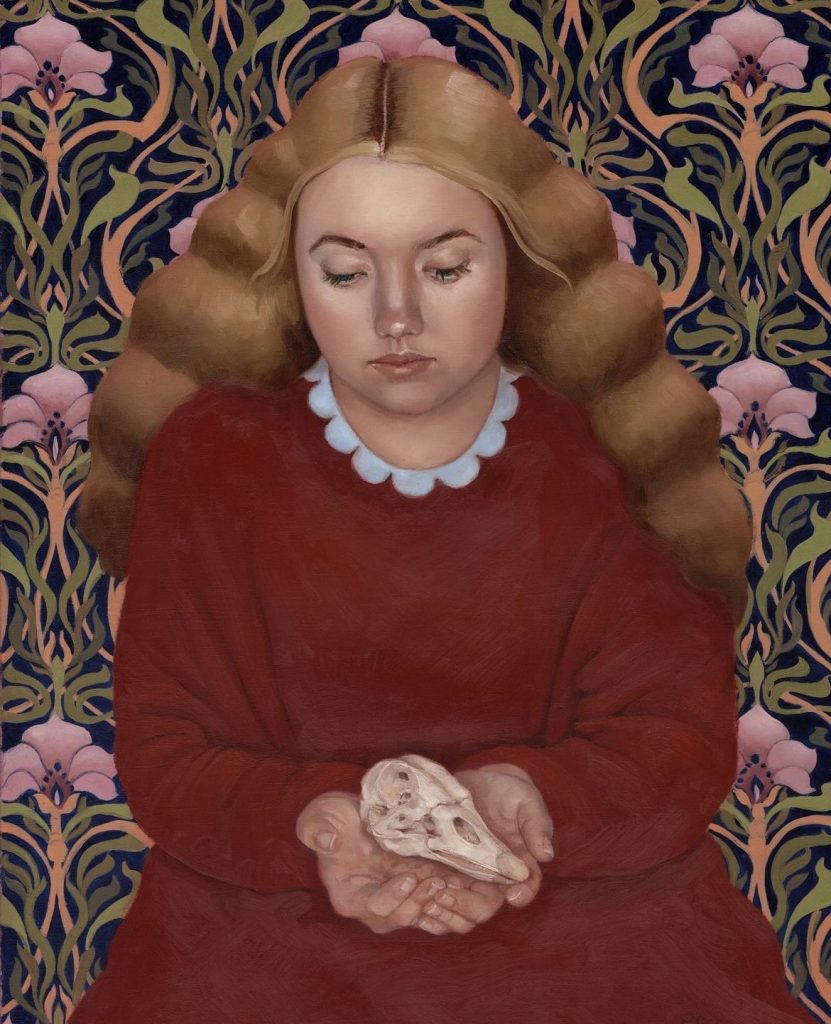 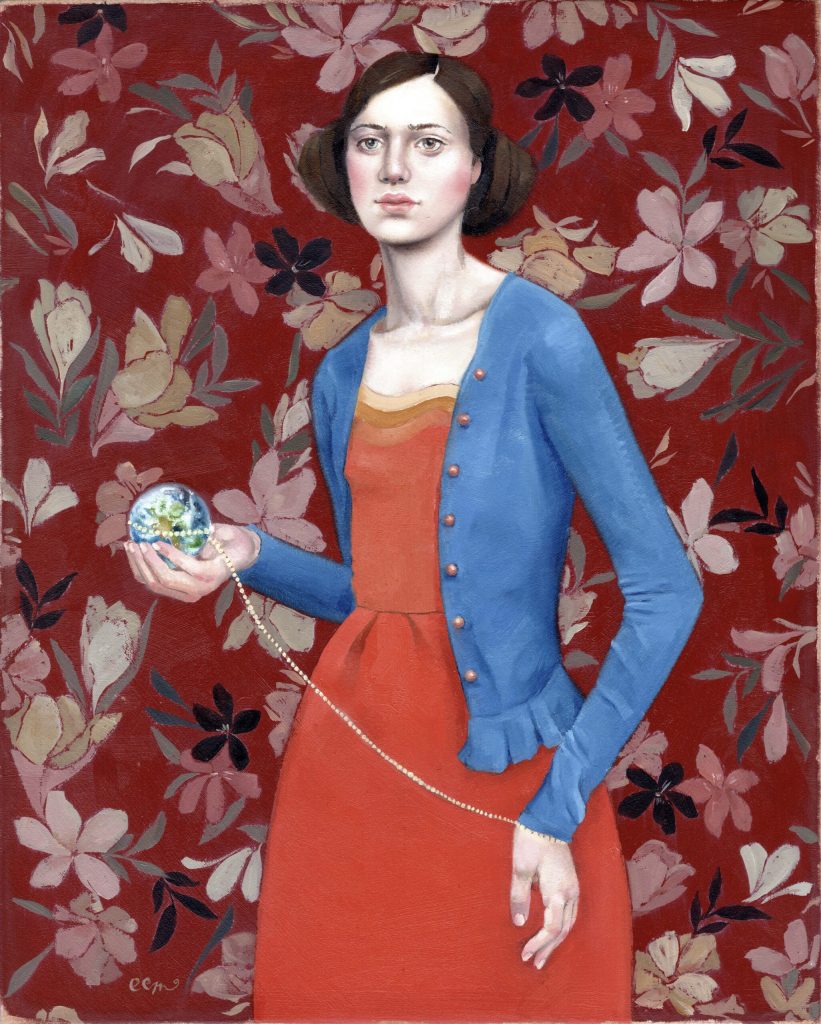 Backgrounds by McPhie can be floral-rich: “One” has a wallpaperish background of maroon, mauves, white and gray flowers, swirling Rousseau-wild behind a thin, stern-looking woman in a vivid orange dress and robin’s-egg-blue cardigan. The dancing, celebrating quality of the wallpaper intensifies, by contrast, her stern and classic look. The presiding mystery is one glass ball, the size of an orange, patterned like the earth, in one of her hands. Mystery — because it’s a globe on a leash. The leash, a delicate chain traveling to her to her other arm, delicately encircles that other arm’s wrist, ensuring the globe really cannot be lost.

In “Tendrils,” the artist takes the charging, insistent bloom-pattern of a floral wallpaper border, lets it hang in the air on each side of a woman’s head. This floral frieze, freed from paper, and the usual upper and lower linear border lines, hangs in the air in the space one each side of her head. The floral frieze seems like a patterned code: each leaf and tendril and blossom seems to charge a tune, some sort of visually apparent but braille-ish code for floral music. 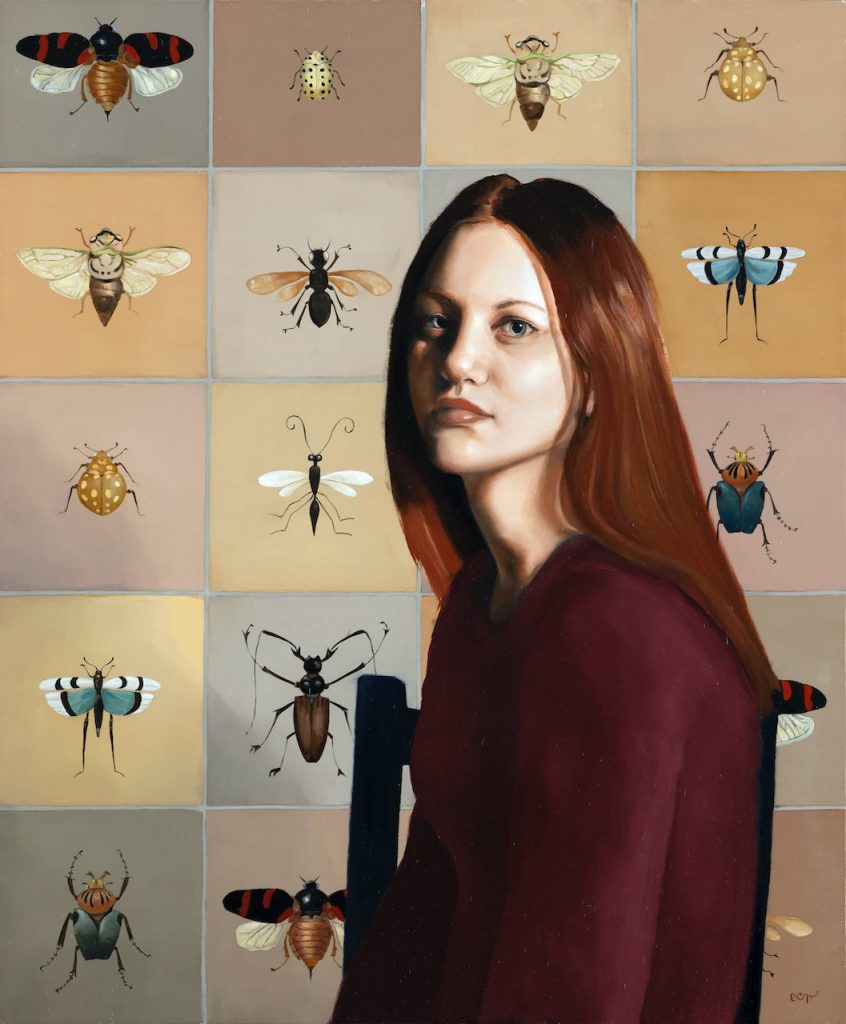 A wallpaper of sorts in “The Way to Grieve” is made by a collection of bugs, insects. McPhie’s father, James Christensen, was a well-known fantasy artist, beloved by the science fiction publishing world; but, according to gallery owner Ericson, he was also a collector: these insects likely represent part of the insect collections Christensen left behind after his death. A beautiful young woman with a troubled, serious expression sits in a straight-backed chair; behind her, wallpaper-style, preserved and collected insects, in neat rows, one to a square, fill the background of the painting. “The Way to Grieve” title suggests that commemorating the dead, even insects, was a father’s contemplative way to grieve in advance for his own or others’ deaths: a way to face death and ponder mortality, but continuing grief-puzzle or grief-mystery for a surviving daughter.

Many of these women in their oil portraits seem beset, haunted, by nature; there’s a terseness about most of their expressions, as if they have been asked to demonstrate something which continually troubles and constrains or mystifies them, though it’s their feminine role, perpetuating nature. That it can be both duty and burden is reflected in self-conscious, questioning, even defiant expressions. A shadow darkness fills many of these paintings. Purely black oil paint ensconces many subjects.

None is more ensconced than the woman in McPhie’s “Beetles” — she’s Hollywood glamour, looking back over her pale, naked shoulder to the viewer. The strap to the dress (somewhere beyond the picture plane: most likely a black velvet evening gown) is an orderly, ornamental progression of natural bejewelment: three exceptionally large scarab beetles, one a dull sapphire blue, the next a creamy, dull cinnabar, the last a mesmerizing jade-green. In Egyptian pharaohs’ tombs, scarab beetles, almost like an oval hieroglyph, represent luck, belief, hope: symbol of the attainable afterlife. (In gift shops in museums which have Egyptian collections, it’s not uncommon to see small coin purses in the shape of scarab beetles, for little girls to bring home as their Ancient Egypt souvenirs.) Simple scarab beetles, in symbolic form, are royal enough to enclose in the tombs of perished Egyptian kings and queens, one generation after another; distinctly, too, they’re a touch of royalty and beauty and hope in McPhie’s group of paintings called as a group Nature as a Goddess. 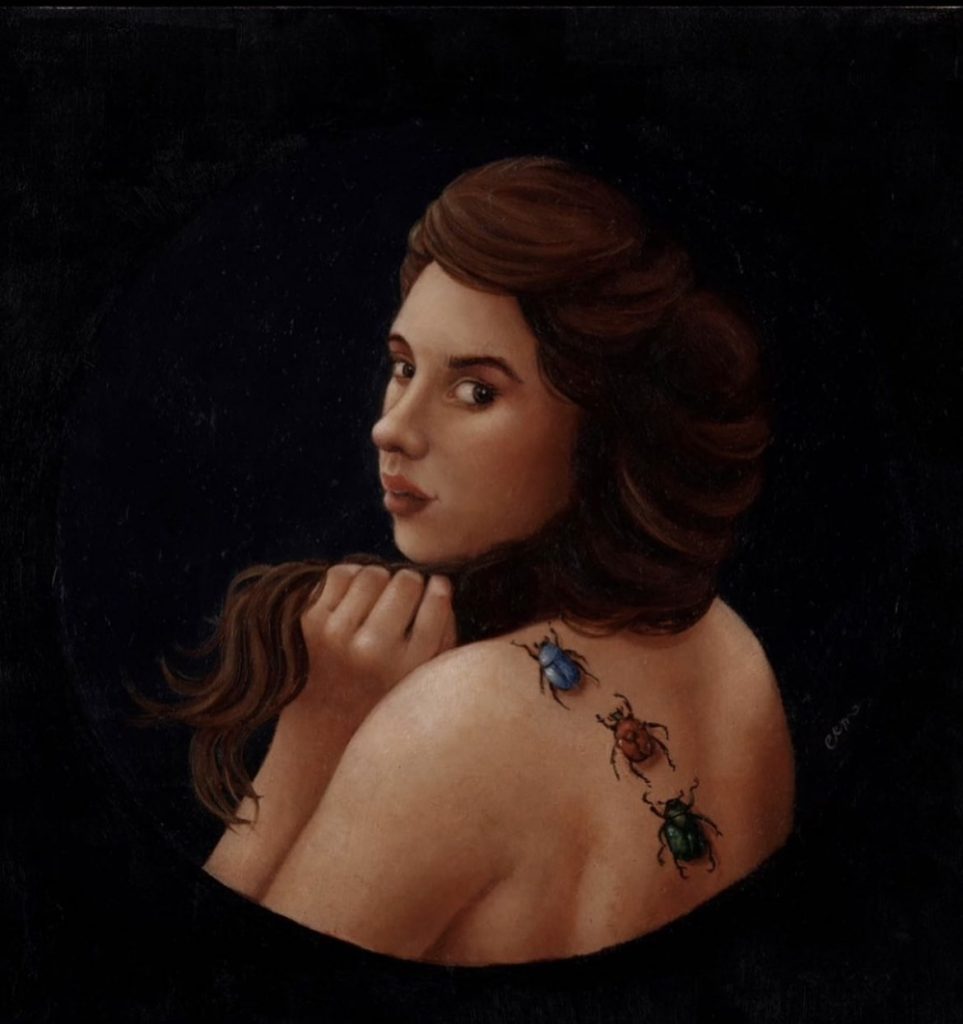