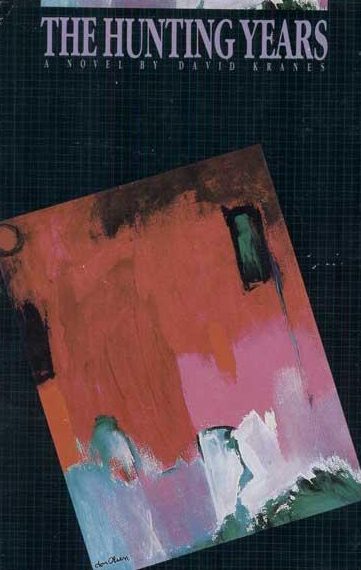 In 1951, Ernest Hemingway began an adventure story by disguising himself as a painter. Islands in the Stream wasn’t finished (or titled that) until 1971, a decade after Hemingway’s suicide. It wasn’t one of his small handful of good books, though the film — in which the painter was made a sculptor — made money. Then, in 1977, a controversial way for authors to use their own lives fictionally, called “autofiction,” was introduced.

In 1984, David Kranes, a prolific and far more inventive storyteller, had a much better idea: to use the events of a painter’s life as a stand-in for the artist’s life in general and the process of writing in particular. Kranes’ novels are spontaneous-seeming collections of often unconnected set pieces: in The Hunting Years, Hunt gets the urge to travel to Las Vegas and adventures follow. Later, during an unrelated, cross-country drive, the car breaks down and Hunt suffers a bout of insomnia during which he tries not to disturb his long-suffering wife while in his mind the Vegas interlude emerges as the scene of a different story, with the real people replaced by fictional characters. It’s like crouching on the shoulder of the artist’s subconscious and watching as his inconveniently-timed alchemy does its transformative magic.

Hunt is one of David Kranes’ many engaging and original characters, an obsessive and inadvertently comic train wreck whose unending protestations of good intentions are more acceptable to those only required to read about him, but who need not actually live with him. To his wife Leah, or some of his old friends, or his dealer, he’s a man who wants too much that life just cannot deliver, like complete honesty from the world of art. He’s also a devoted father to two sons who share an avuncular pleasure while observing and commenting on his often childlike impulses.

Throughout The Hunting Years, Kranes matches up art history and artist biography with his protagonist’s progress. Part I, Hunt’s Blue Period, starts him off at a suitably low point, with a request for a divorce. In Part II, Still Lifes, Portraits, Landscapes, and An Adoration, Hunt’s people and places are introduced and his conflicts elaborated. In Part III, titled Either Expressionism or Surrealism of Action Painting, things get strange—in one chapter, Hunt Imagines Himself. But in Part IV we encounter Hunt the Realist, and things begin to go right. I doubt if anyone in the art business saw the connection revealed in Part V: Commercial Art and Minimalism. All things must end, even if the point of art is less to “make it new” than to keep it going. Nevertheless, Part VI ultimately delivers Hunt Without Style.

Tableaux, vignettes, scenes, or events are David Kranes forte. They empower his forces and keep his writing fresh. In The Hunting Years, a walk in the forest is equal to a flight to London or a meeting with a dealer to introduce the actor who will portray Hunt at his next opening. What makes painting such a superb stand-in for writing is that it’s possible to see painters paint, while what writers do, transcription aside, takes place entirely in their heads. Strung like pearls on a string, the anecdotes that comprise this novel are captivating, more so as it progresses, and unlike in Hemingway, where characters are too often lifeless projections of their creator’s illness, Hunt is funny when he means to be serious and touching when he wants to be cold. His best intentions produce his weakest efforts, and it is only when he begins to relinquish control that he stops injuring himself and those he loves, and who depend on him. In other words, he is one of us.

Some artists have a complex relationship to their own times: they live in the present, we may say, and cannot be fully understood until time has passed. In Margins (1972), David Kranes’ first novel, he explored the life of Mark Eliot, a man who sometimes stalked one women and ghosted others. As a reader, fifty years later, I struggled with these flawed behaviors, and said so in this space in April. Here in The Hunting Years (1984), with equal fidelity and insight, Kranes shows us a man who struggles with his gender role as he tries, fails, and tries again to understand it. I was wrong about Margins. Here, as in the earlier novel, Kranes captures moments that seem to come from our time — in fact, from contemporary feminist women’s side-splitting observations of men’s most deeply entrenched foibles. Consider this conversation between Hunt and his wife as he tells her of his quick-fix solution to his itchy feet:

“I think I’ll go to London,” he’d said to Leah. London Bridge had come into his head. The guard changing.
“You think.”
“Well, the way I am now is dreadful.”
“I agree.”
“My studio . . . seems like a closed place. Dead-ended. I think I need to … get out. I think maybe London might — doing something, going somewhere — might, somehow, get me out of this dreadful …”
“Have you considered groceries? Going for groceries? Or the hardware store? It would help if we had weather-stripping around the …’
So here he was. London

Unlike Hemingway, Kranes continues to write well into his eighties. The novel Abracadabra (2018) and a brilliantly achieved short story collection, The Legend’s Daughter (2013), as well as at least one unpublished novel and a story collection rumored it be in preparation for later this year (though with the pandemic in control, who can say), include only the relevant prose fiction. There are more than fifty plays, some in various incarnations. And the University of Utah Special Collections at the J Willard Marriott Library boasts 14.5 linear feet of his papers: a collection that suggests the variety of input that an insatiable mind demands on the way to producing such an abundance of persons, places, and events as are represented in the manifold achievements of David Kranes.