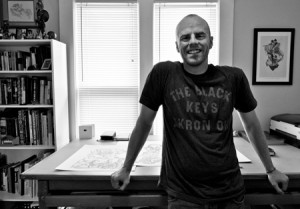 Born in Oregon, raised in Idaho, and educated in Utah and California, David Habben has enjoyed the adventure of living and learning in new environments. Traveling as far away as Melbourne, Australia as a missionary and spending time working with companies on both American coasts has given him a chance to see and appreciate some of the wonderful people and cultures of the world. He uses traditional and digital media, creating illustrations for a wide variety of uses. His projects include editiorial and children’s magazine illustration, children’s book, apparel graphics, storyboards, advertisements, branding/identity, and interactive design.

In my personal work I make a conscious effort to leave some of the hurdles of the illustration world behind and work with as few revisions and sketches as possible. This pushes me technically to get it “right” the first time, but it also opens up doors for my emotions and thoughts to present themselves openly. Characters and concepts that are normally left aside to make way for client requirements are given a chance to breath. For artists who haven’t stepped into the commercial realm, this effort might be something they take for granted. Since I try to find a balance between the two worlds, this process has taught me to not only value my imagination, creativity, and feelings more, but also to refine my abilities to communicate those to my audience.