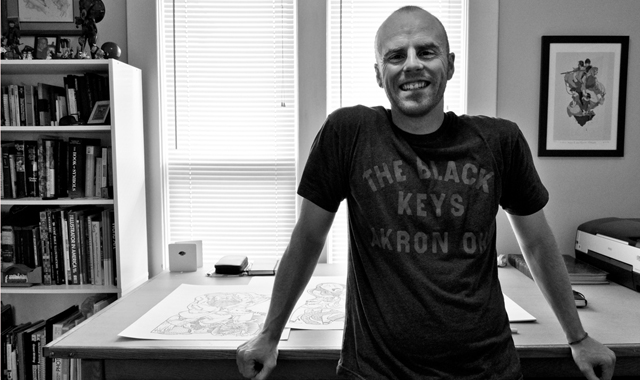 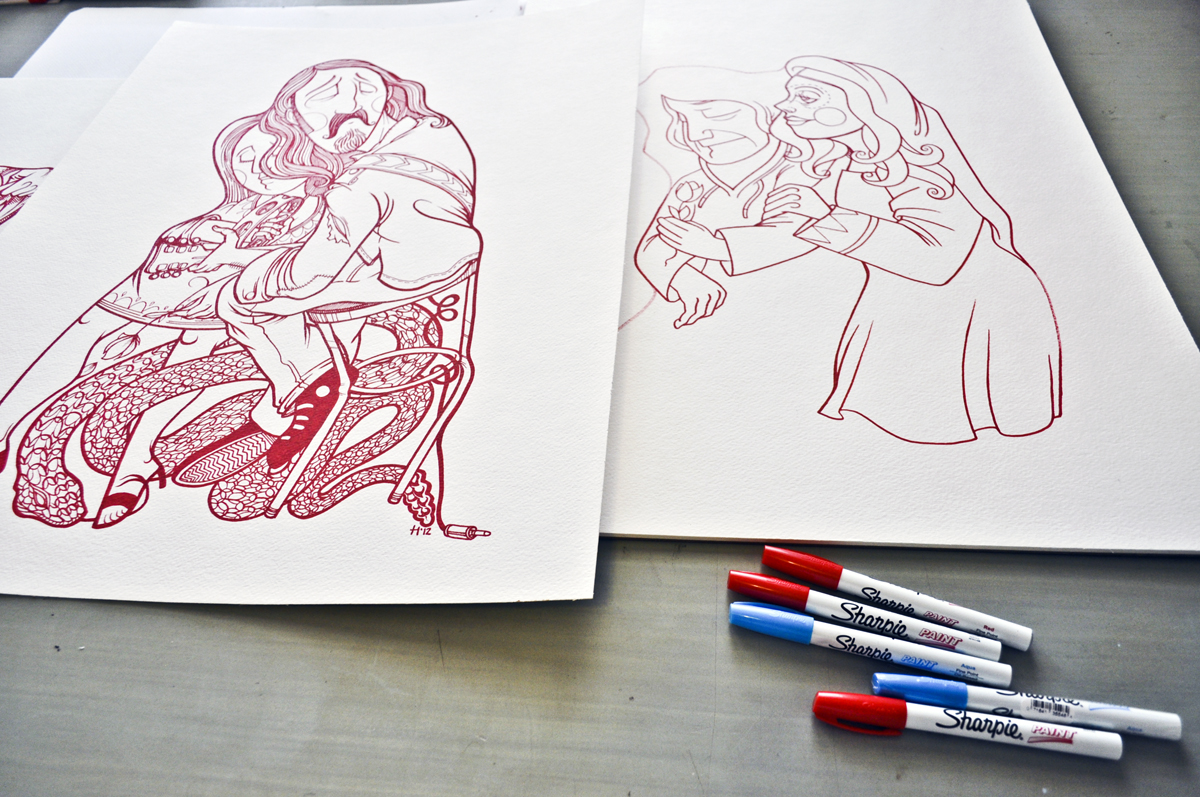 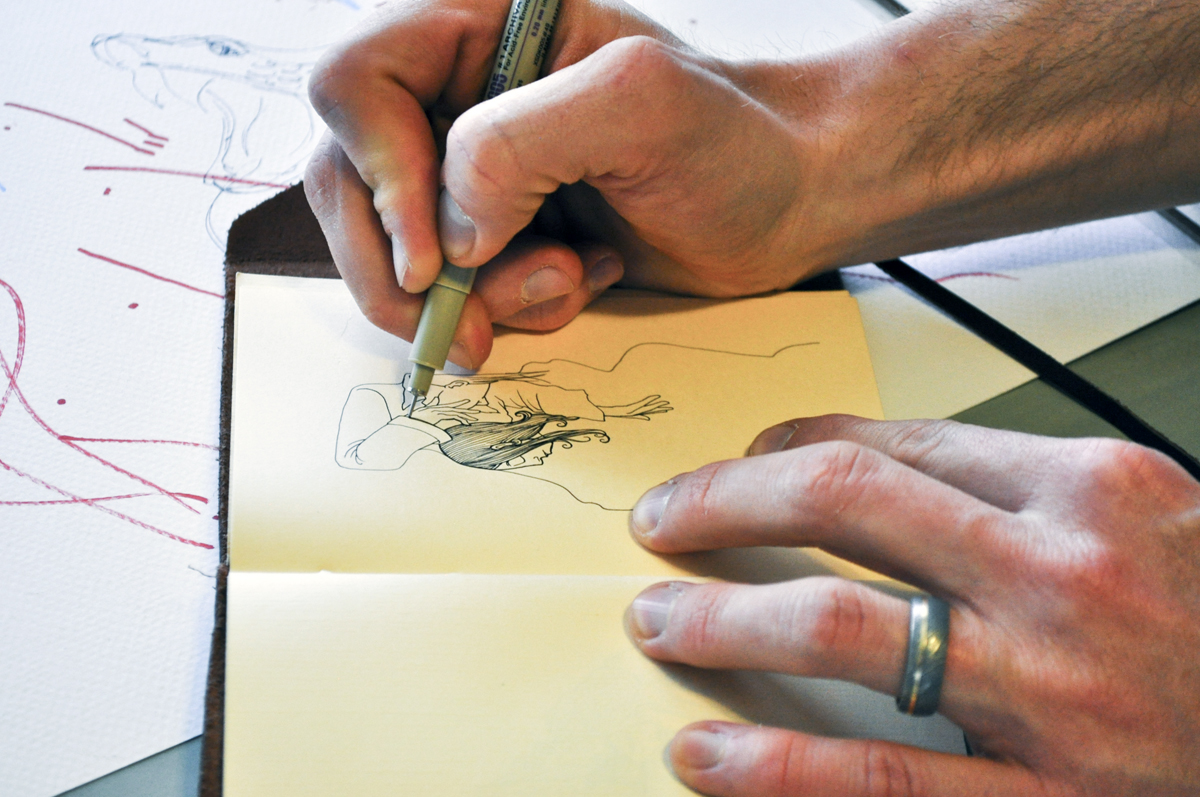 Since childhood, Habben has always loved to draw and grew up surrounded by books. His mother, a librarian, encouraged reading and artistic expression but it wasn’t until high school that Habben recognized that illustration and drawing actually made him happy, and not until college that he realized that he really wanted to establish a career in illustration and design. Early on, Habben recognized the challenges facing a working artist, “I wanted to draw and make art but I also wanted to put food on the table.” Illustration provides a viable and enjoyable career for Habben, who makes a point to exhibit work in a gallery at least once a year to nurture the side of him that craves the experimental, fine art driven creative processes which offer balance between his personal work and professional world.

Habben is a passionate artist who admits his innate desire to move beyond what has been comfortable within his art to challenge himself and grow artistically. Although he recognizes the value of cohesion within his art, he also seeks opportunities to diversify his portfolio. This approach has worked to his advantage, allowing for increased marketability and self exploration. His illustration of Beloved, a graphic novel written by Ben Phillipe and Victor Ochoa was presented at the New York Comic Convention in the fall of 2010,|1| and God Above, a self-published work,|2| was featured in Phillipe and Ochoa’s new publication NOBODIES, from independent press Draw More Inc. Habben’s commercial work includes covers of local and national publications, including Salt Lake Magazine, Utah Business Magazine and BYU Magazine, concert posters|3| and custom designs for Chimera Snowboards.|5| 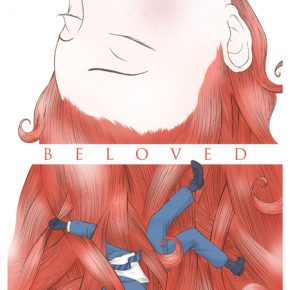 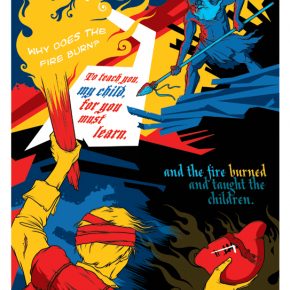 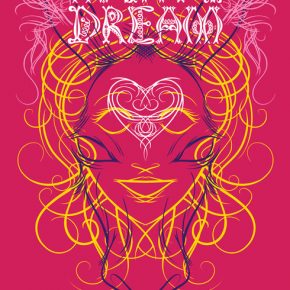 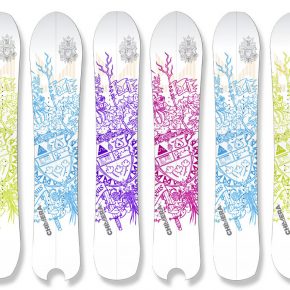 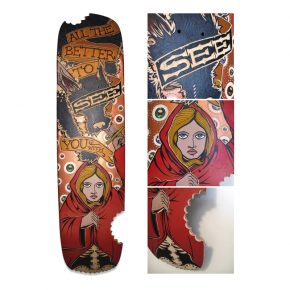 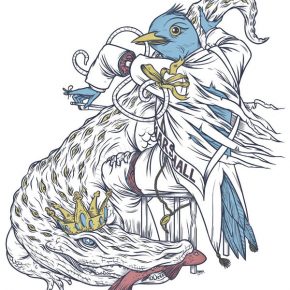 In a show that opens on May 18, Kayo Gallery will feature new work from Habben, conceived with a sketchbook and a pen.|7| Habben enters his sketchbook process with no preconceived notions, an approach which epitomizes artistic freedom, spontaneity and self discovery.The characters that reveal themselves in the pages of Habben’s sketchbooks are influenced by whatever is in his mind at the time. If he’s been following the news in the Middle East, his characters may reveal subtle Islamic references, or if he’s following business news his characters may appear in suits. Typically, Habben will have three or four sketchbooks going at one time, each offering very different conceptual ideas. He may select a different pen for each book, which will determine the structure, form and design of the line work.|8| For the Kayo show, Habben wanted to focus on the formation of simple lines, creating organic shapes that would generate an outline allowing the shapes to manifest spontaneously. This style of working from the outside in leaves a great deal to the imagination and is not always a sure thing. As he begins to illustrate between the lines, a face may form quickly or not at all. “Sometimes they’re lousy and sometimes they work out,” says Habben. “It’s all part of the process. And provides that sense of challenge where every choice I make is permanent.” The work at Kayo will be signed and numbered and will include large and small prints, the latter priced at a very affordable almost criminal $10. Habben’s hope is that many prints will sell at this show to enable Kayo who has been struggling lately, to keep their doors open. There is no guiding theme for the Kayo show but Habben tells me with a smile, “there are a lot of bearded guys, a lot of robes, flowing hair, young women serving older women, there’s less pop culture—not American Idol stuff and it’s more reflective thematically.”|10| 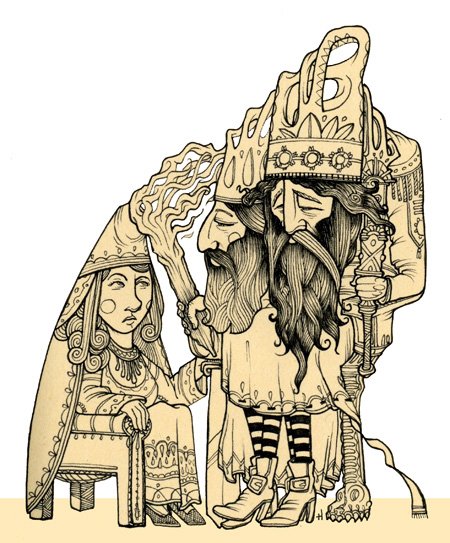 Habben prefers the viewer to self-direct their interpretation of his work. “I’ve done shows with statements, I’ve done shows without, I prefer them without,” says Habben. Subjectivity in art is something that Habben feels strongly about. “One of the things I pride myself on with my particular art is craft and draftsmanship. As someone who draws more than paints, I feel that the medium is not as forgiving. If I put a statement on something, I feel it overshadows what I’m trying to do with my art. With the show at Kayo I want people to see the creativity of filling in these random shapes I made and hopefully recognize the craft of the line-work.” Ultimately Habben has no desire to guide subjectivity and prefers the viewer to pull their own interpretation, if any, out of his work. “Maybe one of the characters ignites a memory of their father or something and if I can spark an emotion of some kind in the viewer that is way more important to me than making an ideological statement.” 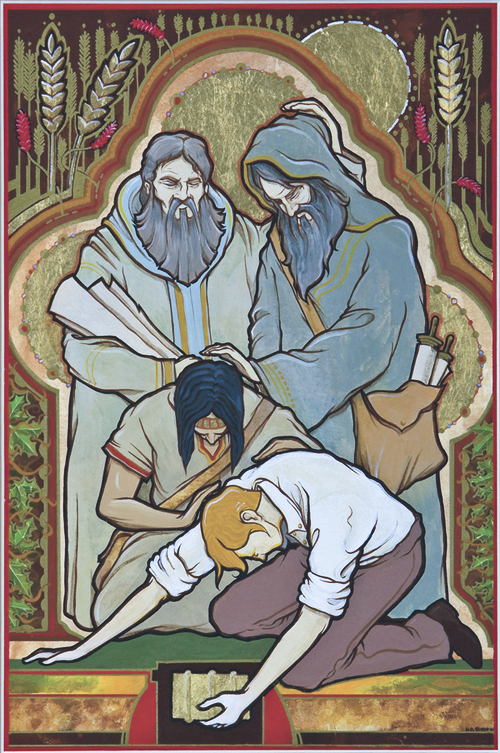 When talking with Habben, there is a sense of honesty that is immediate—his accessibility as an artist is so natural it simply draws you in; there is no pretension or artifice to his words. He’s influenced by literature and music, both of which contribute to his process of creating art. He’s currently reading Zen and the Art of Motorcycle Maintenance, the iconic memoir by Robert Persig. Habben reflects on how the book relates to individual experience and subjectivity, referring to Persig’s notion that “an engineer isn’t going to look at abstract art in the same way as the art historian.” When asked if all interpretations of art are equal Habben makes an important distinction between viewing art through a purely visual and emotive lens and viewing it through a contextual, cultural and historical lens. Habben recognizes a fundamental difference between interpreting and appreciating work. For instance, the four figures seen in “Yesterday, Today and Forever,”|11| encourage the viewer to think outside of conventional parameters of interpretation as it relates to history. “The historical figures in this piece are hundreds of years apart, a stylistic choice designed to show my interpretation of inner-connected events using a manner that fits for me. But it won’t be appreciated by everyone. Some may say it’s an inaccurate interpretation of history.” It’s not surprising that Habben’s Mormon faith guides his life and his work. As we talk about faith and religion, it becomes clear that Habben inhabits a holistic view of both. Having never felt the need to use classical, more widely accepted art forms and subjects such as landscapes, traditional historical scenes or portraits to represent his beliefs, Habben went against the grain, establishing a uniquely personal style that sets his faith based work apart from many of his peers. “When I say I believe in a God that loves us all I have to accept that some people will never feel that way and that reality is as much a part of our humanity as me waking up one day and feeling really blessed. ” Habben admits he has more questions than answers and this comes through in his art in a very personal and profound way. “I hope it connects, it’s me attempting to break things down in my head and I hope people can relate in some way to what I feel and what I believe and if they take something away from the experience I’ve achieved my goal.” 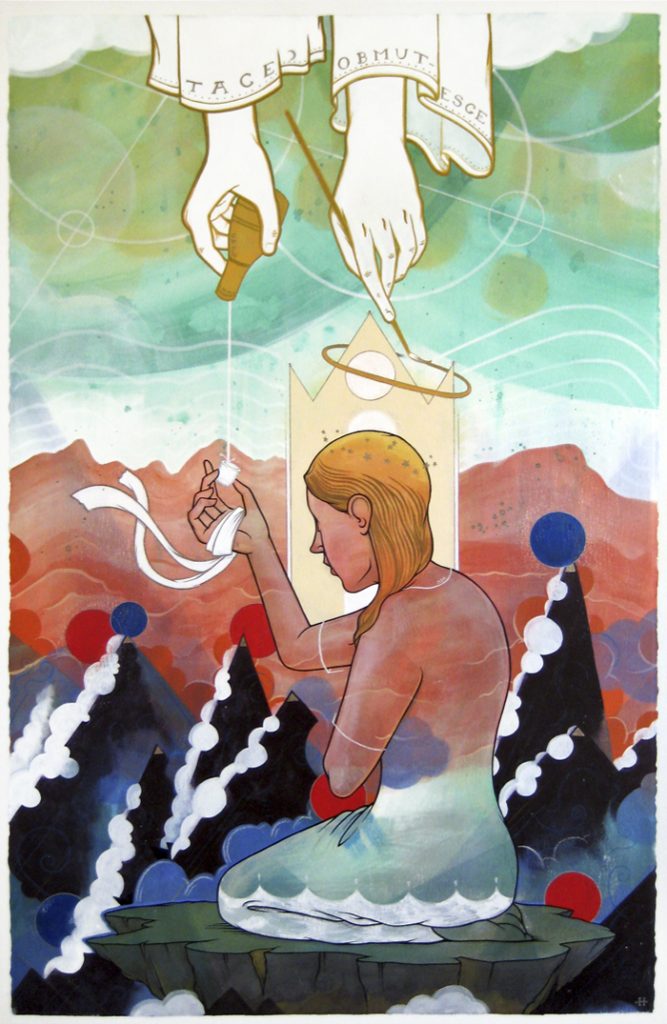 David Habben will be showing at Kayo Gallery with fellow illustrator Desare Lee in an exhibit that opens May 18 and continues through June 9. His piece “Peace, Be Still” |12| is part of the 9th International Art Competition of The Church of Jesus Christ of Latter-day Saints, on display at the Museum of Church History and Art through October. You can view more of his work at habbenink.com. 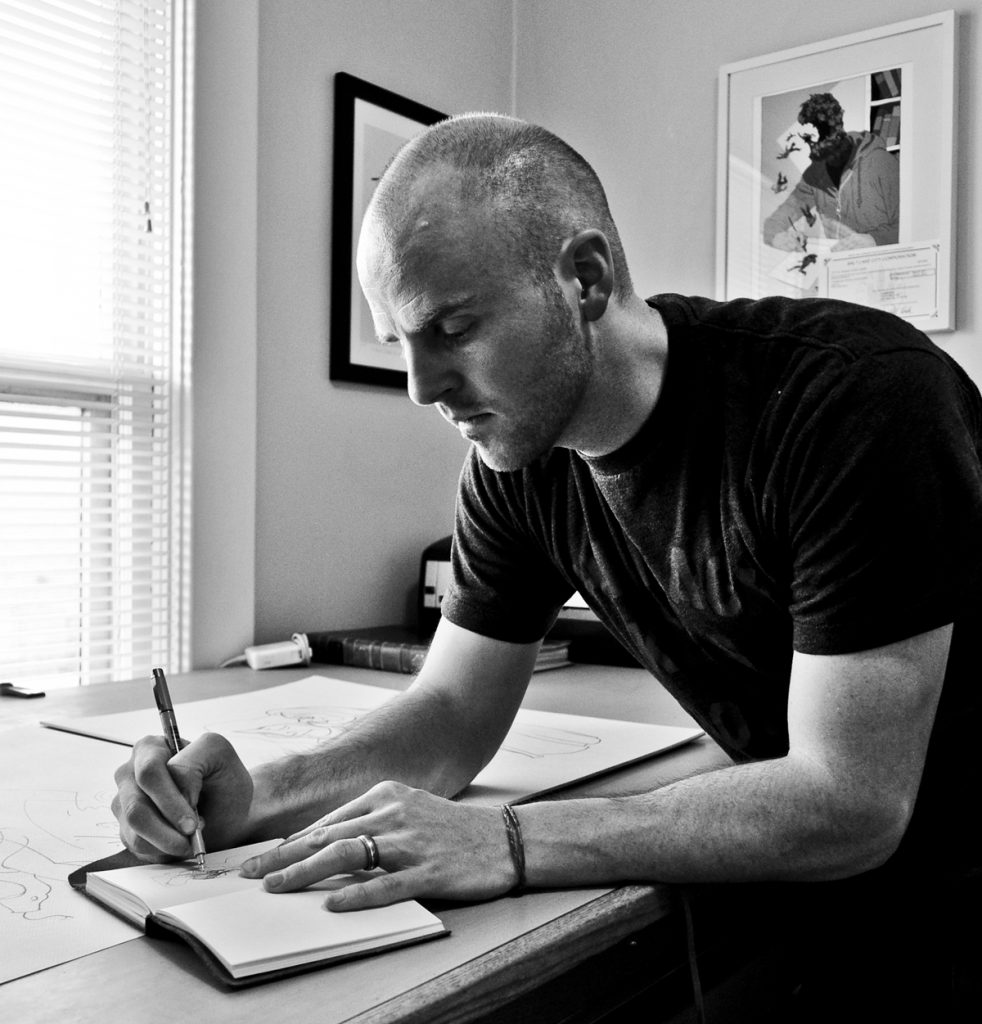