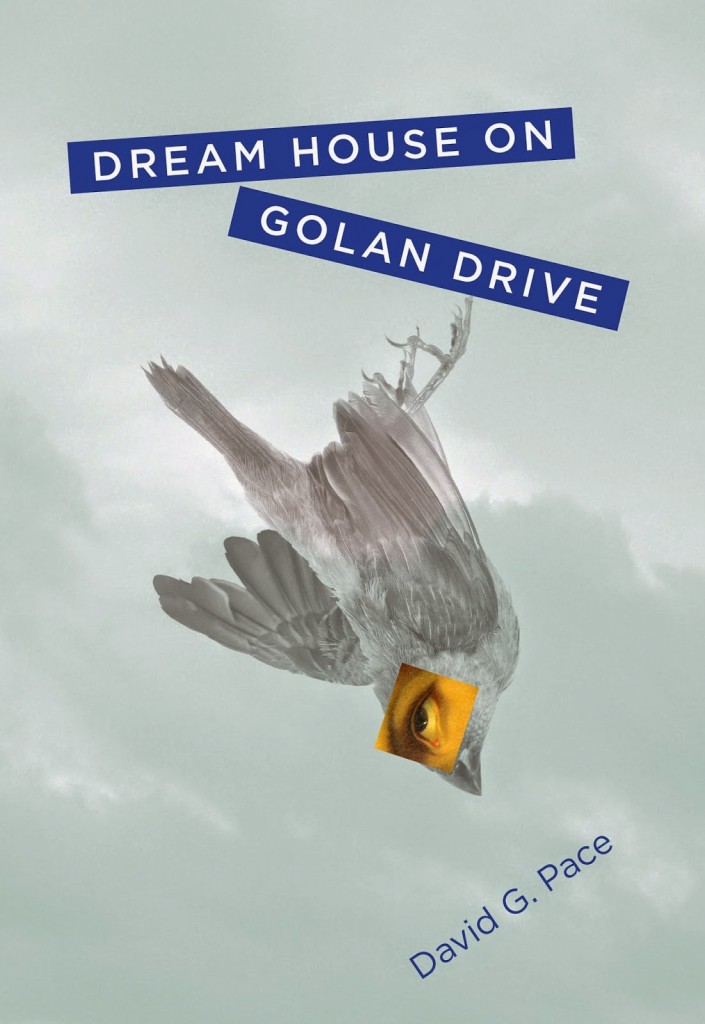 In the beginning was the word, and in it, revealed, through its fullness, the possibility of both blasphemy and redemption. Both/and. Because Mormonism is a vast tent, and also an unbalanced one, most of its stakes on one side. Less and more active, perfection and atonement, sexual purity and the purity of (authorized) sexual expression. Self-righteousness and self-abnegation and self-abuse; lost souls cutting and starving their temple/bodies. A religion defined by canning tomatoes and baking bread and sweaty labor, and also a religion of transcendent glory. Positive and optimistic, with a formal name welcoming apocalypse: LDS. Paradox without resolution or synthesis. And sacrifice. And justice and justification. And angels. Earthbound and charitable. But also, all those angels.

David Pace’s semi-autobiographical novel, Dream House on Golan Drive, navigates this map full of Mormon cultural terrains with dexterity and precision, thumping over bumps in the road, while simultaneously suggesting the possibility of flight. If Terryl Givens is right in suggesting that Mormon culture is, at its heart, a series of ever-receding paradoxes, those paradoxes find expression, if not resolution, in this novel. It’s a both/and novel, transcendent and transgressive, full of magic, but also appalling in its specificity. Once I started reading, I couldn’t set it aside; twice, I also nearly pitched it across the room. It’s an extraordinary achievement, and its publication marks a major cultural moment. Grant all that. And yet, and yet. . .

The novel follows Riley Hartley, a straight-arrow Mormon lad from the most idealized of possible fictional Mormon families, as he moves from faith to doubt to apostasy to . . . well, redemption, I suppose, though an equivocal one. Its wise and cynical narrator is one Zedekiah, Zed for short, who is one of the Three Nephites of Mormon cultural lore; a jaded ancient blessed/cursed to wander the earth forever. This device allows the third person omniscient p.o.v. something approaching actual omniscience, though in fact, Zed doesn’t quite know exactly what’s going to become of this bright and verbal and talented and lost young man he’s been assigned to follow. And at times, he’s allowed to intervene, most especially at the end of the novel, where Pace creates for Riley the most remarkable spiritual encounter since Levi Peterson took Frank Windham into a men’s room and revealed to him the Cowboy Jesus.

In fact, Peterson’s The Backslider isn’t a bad parallel to Dream House. Both novels deal with young Mormon men, with their sexuality and their confusions and doubts and eventual marriages. Both deal with that most Mormon of contradictions, the past, present and future (?) of plural marriage. Both find partial, equivocal resolution in sacrifice and atonement. Both are set in Utah, and in iconic Utah locales—southern Utah for Peterson, and for Pace, Provo.

(In fact, I can’t be the only reader who will find Pace’s familiarity with specific Provo personalities and locations somewhat disconcerting. The novel is, after all, semi-autobiographical, and I do know at least something about at least some of the people he’s talking about. So there’s that. Not that it should matter. I kept reminding myself; in the end, it’s a work of fiction. Treat it as one).

And, as a novel, I responded first and foremost to the beautifully drawn characters. Initially, we start with the Hartley family, the children of Gus, a popular Mormon speaker, writer and teacher, and Joan, their firm-willed matriarch, a former Miss Utah. And from our first encounter with the Hartleys and their (eventual) 10 children, what we’re led to believe is a fairly typical Family Home Evening lesson, we see the central tension of the novel, this family’s impossible pursuit of perfection, and the tensions and difficulties of lived Mormon life. The children are initially sketchily drawn, with only the parents given much detail. That makes sense; it’s how a child would process his own family. As time passes, of course, we learn of the kids in more detail, as they grow and change. And sin, and struggle, and try to live up to their parents’ expectations. And fall. And get back up. And grow ever sadder, and ever more certain.

And then, just when we need her, the novel’s most vivid character makes her entrance. Lucy is a former hippie, converted to the gospel through Gus’ teachings and a fortuitous encounter with missionaries. She moves in with the Hartleys, and essentially becomes Riley’s foster sister. And Lucy is extraordinary, a woman of tremendous faith and constant doubt, a woman who never once questions, in the pejorative sense in which Mormons use the word ‘question,’ while constantly asking questions. She teaches Riley about the power of language, and she and he become particularly close.

What Riley comes to love about her is just this: she’s different. In a close-knit, culturally homogenous community like Provo, a former hippie can’t help but be exotic and fascinating. And she does ask questions; is allowed to question. Gus, who seems to find certainty through a continuing dialogue with the contradictions of his own culture, who exudes absolute (but heterodox) conviction, is able to verbalize that dialogue by talking things out with Lucy. And so, she becomes Gus’ greatest convert, his most loyal acolyte. And does it by rejecting the very essence of the conduct he expects of his family. By ‘sinning’ most thoroughly, and paying the starkest price for it.

At one point in the story, an LDS apostle comes to Provo, and before everyone singles out Gus’ teachings as particularly apostate and dangerous. Gus publicly deals with this humiliation with humility; this gratuitous gracelessness with grace. He’s admired for it; if anything, he becomes even more beloved within the culture. His central teaching, that through constant personal revelation we can approach sinlessness, inspires Lucy. And here, I think, we see one of the central paradoxes of Mormonism; the insistence on absolute certainty, combined with Mormonism’s fundamental doctrinal instability. “I know the gospel is true.” But what do we mean by ‘the gospel?’ And nowhere do we see that more than in the Church’s equivocal continuing embrace of polygamy, understood as an eternal principle (though practicing it today, while living, remains appallingly apostate).

And so the paradoxes and contradictions of Mormonism batter away Riley’s faith. And that’s the heart of that novel; that battering. He’s too rigid to seek syntheses, too angry to experience much in the way of love. His first marriage founders and fails. His second marriage is poisoned—literally; AIDS is a constant subtext in this novel–by his continued sexual explorations. And Zed mourns. And finally, acts.

It’s an extraordinary novel, beautifully conceived and written. Part of me also worries that it might be seen as a continuing act of betrayal. Certainly, most active Mormon readers will find it disturbing, in its specificity regarding what we tend to regard as sacred spaces. Again: it’s transgressive, deliberately and productively. It’s also a novel of a rare and powerful transcendence. Both/and. Terrific. And troubling. Do I recommend it? Wholeheartedly. And also, not at all.