If it were not for a failed business venture in the early Seventies, Salt Lake City would not have one of its premier galleries. It was after two-and-a-half years at the construction business and a business venture gone badly that Dave Ericson opened Gallery 56 in Salt Lake City in the late Seventies. Ericson, who had begun buying paintings while still in high school, purchased thirty paintings and over four hundred sketches by Alma B. Wright while at college. During these college days Ericson’s entrepreneurial spirit emerged.

When he became dissatisfied with his business ventures, he contacted his college friend Al Rounds, combined the young painter’s work with his own collection, and decided to hang out his shingle. Gallery 56, located on fourth south between Main and West Temple, was born.

The gallery grew for nineteen years until rent hikes in the nineties caused Ericson to move shop. For four years his gallery found a temporary home next to the Dolores Chase Gallery on 2nd West. Now, due to a stroke of luck, David Ericson’s gallery has found a new home. 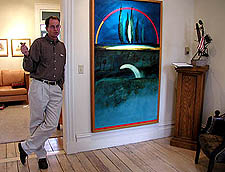 David Ericson’s new gallery, located at 418 South 200 West, opened its doors to the public on December. 1, 2001. Now some of Utah’s finest artwork is located in one of the five remaining 19th century homes in the downtown area (6th South to North Temple and I-15 to 3rd East).

When Ericson purchased the 1888-built home in the spring of 2001, it required major work. A section of floor needed to be raised four inches due to extensive water damage — at some point in the home’s “life” a hole had been drilled in the sewer line to accommodate an electrical line. In addition, Dave had all of the lead-based paint removed from the exterior of the home. This required a special hazards waste remediation specialist. Other major improvements include new plumbing, heating and air conditioning.

Ericson and his family performed most of the improvements themselves. The typical work day consisted of awaking at 6 a.m., working on the home until noon, when Dave went up the street to stay at his gallery next to Dolores until five; then returning to the new gallery from 5 p.m. until midnight. Dave and his crew worked 80 to 100 hour weeks. The results are magnificent. 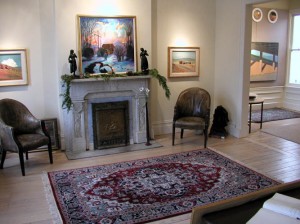 The home retains most of its original architecture. The hardwood floors give the place a particularly warm feeling, as does the fireplace. The high ceiling with the trim around the entrances make each room a treat to enter, not to mention the art. Oh, Oh the art. Well, that is a whole other story.

Take a moment or take a while and walk through a great piece of downtown history, enjoy some terrific art and meet David Ericson. He is a pleasure to talk with and runs one of the premier galleries in Salt Lake City. 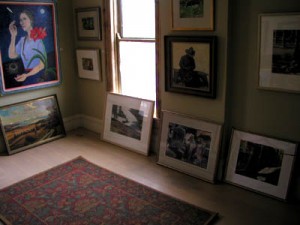