This past weekend was a celebration of abstract art in Salt Lake City, with the top tier of the state’s abstractionists exhibiting at Salt Lake’s Rio Gallery. This dazzling exhibit of the brightest and best includes Dave Malone, who is also featured in a solo exhibit this month at Phillips Gallery. Malone’s abstraction is one that seems to push itself, to nudge this way and that, trying to get comfortable with itself; and it is in this trying to get comfortable with itself that the malleability of the form and the linearity of any represented structure are made representative of an intriguing phenomenology of abstraction.

These gesturally expressive works seem to come from some deep place within the artist, as is evident in their visual intensity.  The show features over twenty very impressive watercolors; although they are abstract, each has a quasi-iconic look as each assumes a strong centralized form of heavy color and heavy tones within a clean field of white paper. In addition to these, Malone has created a series of wall structures, painted assemblages with a strong vertical thrust which function on the gallery’s white walls in a manner similar to that of the watercolors on paper.

During the conversation I had with Malone, as he and gallery director Meri DeCaria were hanging the show, my impression of Malone as a masterful abstractionist never came to the fore — this was something I already knew — but many things I did not know about the art of abstraction, pure abstraction today, were brought to my attention. 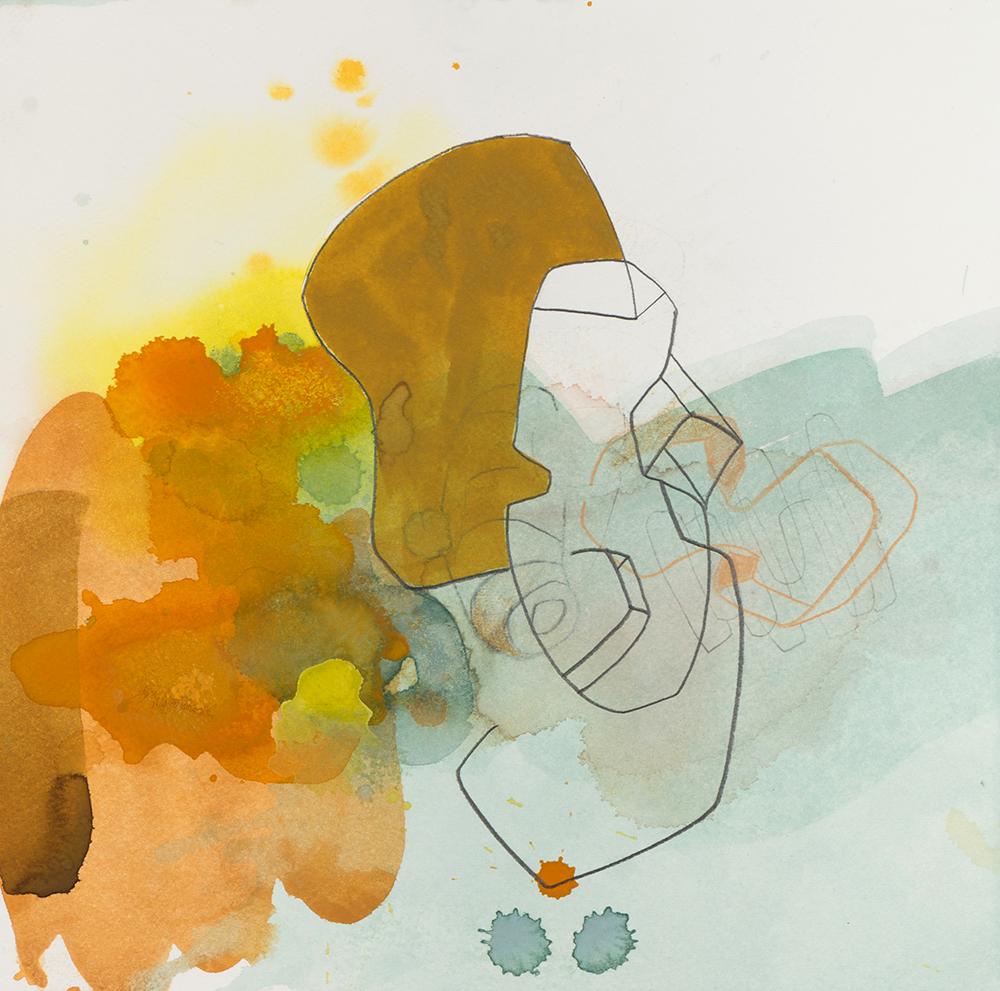 One of the most interesting phenomena learned from my perspective is how the getting comfortable period — that part of the process prior to accomplishment, when there is a state of disarray — can be quite a beautiful thing.  This was noticed with “One Day,” a painting I described to Malone as a cacophony of linear shape with no resemblance to anything, set at unusual angles, with flatness here and depth there, and a blending of earthy color with no regularity or apparent rhyme or reason of any sort — one might even call the construct of linear structure and color wash form an arbitrariness.  But isn’t this a beautiful idea, to be so detached from the realms of purpose, to be so liberated from reason, to be totally free from realization, to where the painting exists purely on its own merit, with a cacophony that is beautiful in its disunity, and disheveled state?

Malone was surprised by this observation and mentioned how he had always sought within his structure and form to find the opposite of cacophony, a symphony.  My realization is that the symphony is easy.  It has long been accomplished innumerable times by innumerable great artists of all types, but for a cacophony to be truly beautiful, and not just a bad attempt at art, this is a rare thing indeed.  It takes an artist who is also detached, who is completely liberated, and someone so free as to be indefinable; someone very much an artist.

Malone’s most current work is more of a hybridization than his past work, and has a look that is ironically more attached to the past, but has the zeitgeist of the present.  While previous works, with their minutia of color washes, looked much like Helen Frankenthaler’s or Lee Deffebach’s, the newer works function with the distinctive reality of the neo-Modern, which plays with the abstract forms of the twentieth century, but leaves behind utopian visions and quests for visual purity and becomes grounded in subjective iconography.

For the abstraction of Malone, and for most good abstractionists today, there requires a touchstone, a signifier of some sort that designates it as today —  be it a circle, a repeated gesture, a certain use of a particular color regularly or in anyway implicitly, any shape that might look iconic, or the line that is ubiquitous in Malone’s work, as are also hollowed out spheres or amorphous form or repetition of stripes. Malone’s paintings may have essences of Frankenthaler, or the playfulness of Klee but they are not grounded on form alone or structure alone; this is not the High Modern, this is contemporary neo-Modern and something very different.  Contemporary abstraction may have much to do with the past but is a new entity today in a world that has done a number of 360’s since the days of the Abstract Expressionists and post-Painterly-Abstractionists. 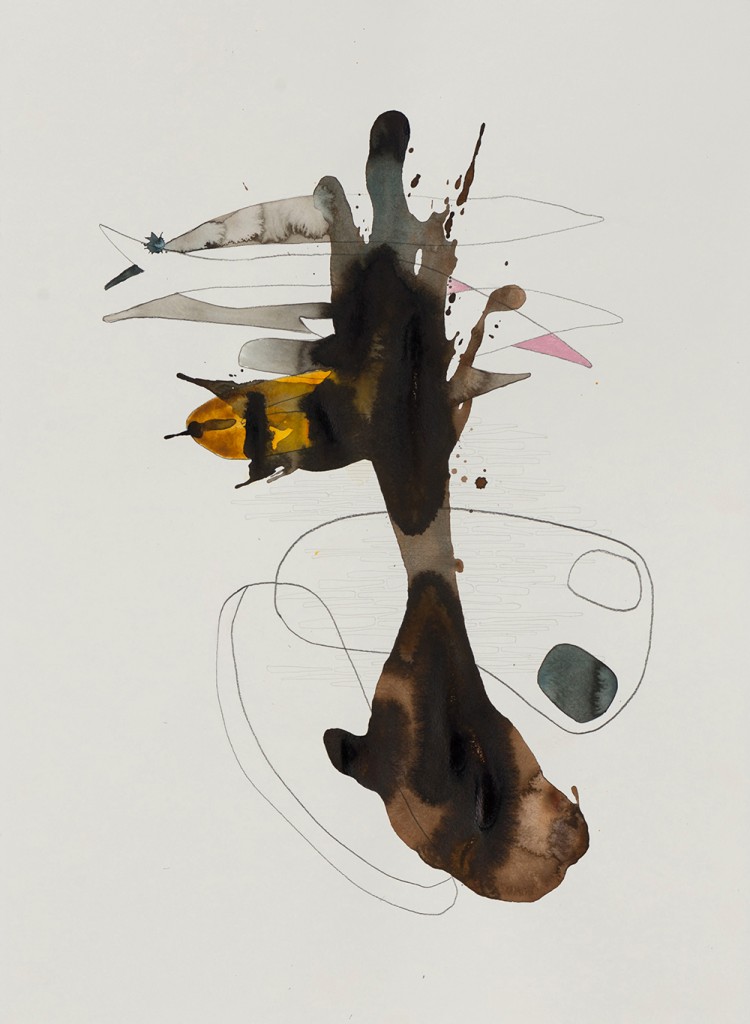 The magnificent “Emergence,” with its heavy centralized darker wash, has the essence of a Motherwell in its heaviness, or a Klein in its dark gesture.  This dark heaviness bleeds into vivid yellows and in some areas can be found silver blue, even pink.  Yet the neo-Modernism is phenomenologically granted by the needlepoint sharp line that winds its way through it like a gentle cocoon as certain areas of closed shape encapsulating color.  “Untitled 004” and “Untitled 002” each assume a distinctive regularity in their abstraction.  “Untitled 004” uses a width of vertical bands of citrus yellow full of play with the element of the water in the color and the saturated water that spreads around this rhythm of vertical bands of unevenly placed, spaced, toned, and hued color, creating a faint aureole around the centralized form.  The very same phenomena occur for “Untitled 002,” yet in black, eliciting an entirely different receptivity to the form.  “Untitled 007” and “Untitled 005” are both very tersely painted watercolors with little play of color except for gradation of the hue within the form.  Each of these forms is tightly centralized, “Untitled 007” being a rust tone that is vertical, “Untitled 005” being black that is horizontal.  Each are acutely nebulous with evenly spaced, evenly structured rings of space left open within these nebula, yet each of the rings have been allowed to be saturated by watered hue to varying degrees, to a point almost of obscurity.  The color, the placement, the iconography, each allows for a different response such as mood or cognitive association that is utterly distinctive for each. 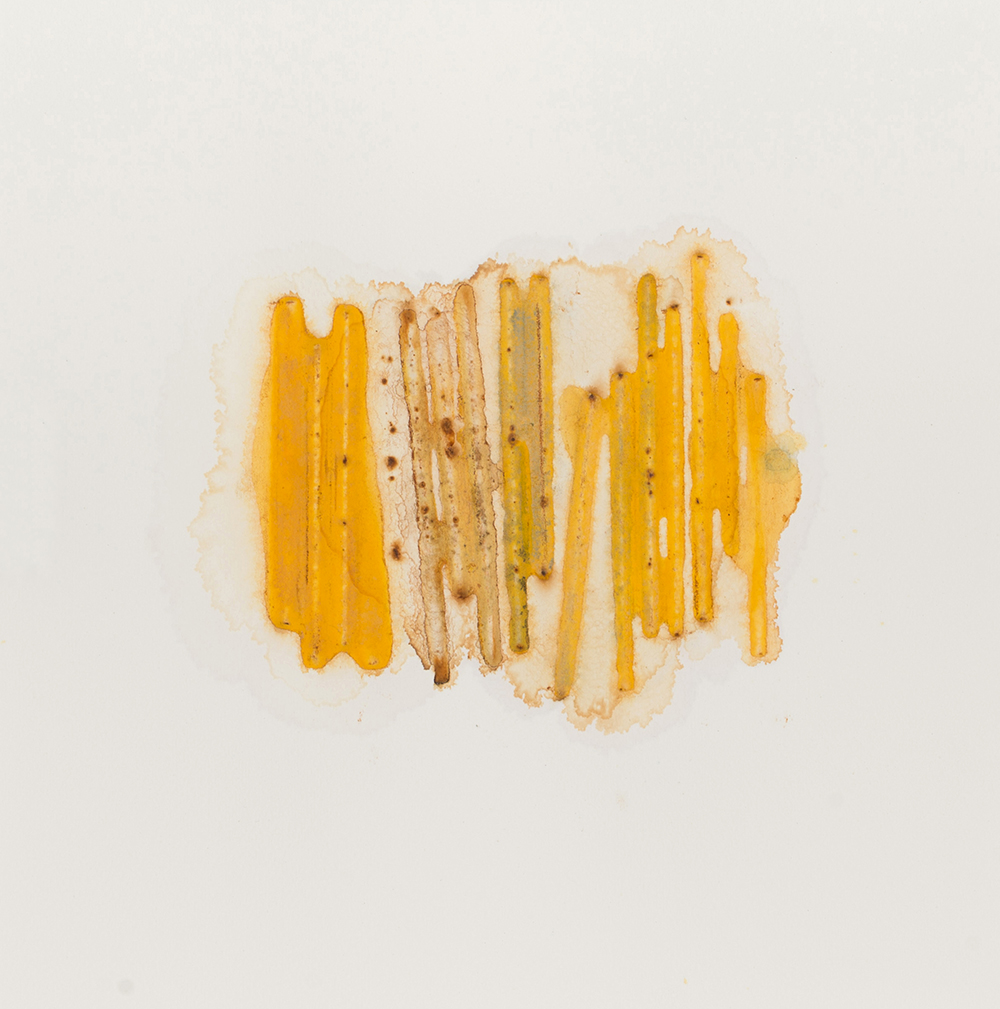 Today’s abstraction, like fine art in general, has developed from the past.  We still appropriate Modernist methodologies and our reality is decidedly post-Modern, but abstraction has gotten comfortable in today’s world.  Like everything else, it does not have empty dreams of vague utopias but real presences of genuine, easy, and comfortable connectivity.  There has to be something to keep it a unified art; this is one of those ways, of many, found in Dave Malone’s phenomenological workings of his abstraction discovered during a very pleasant afternoon. 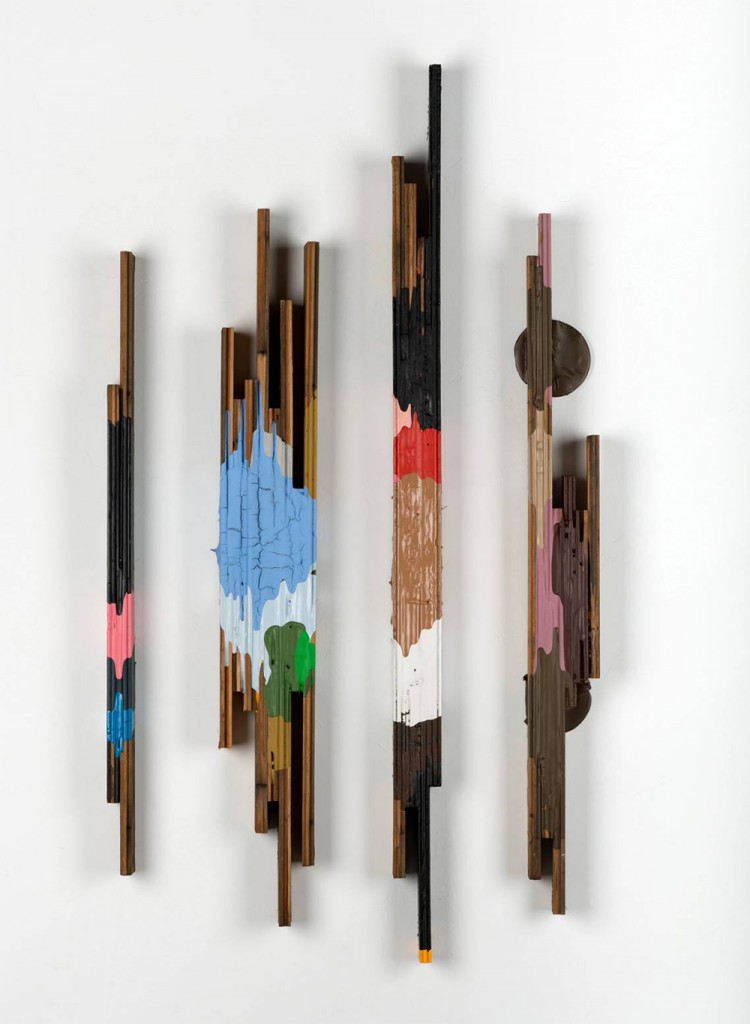