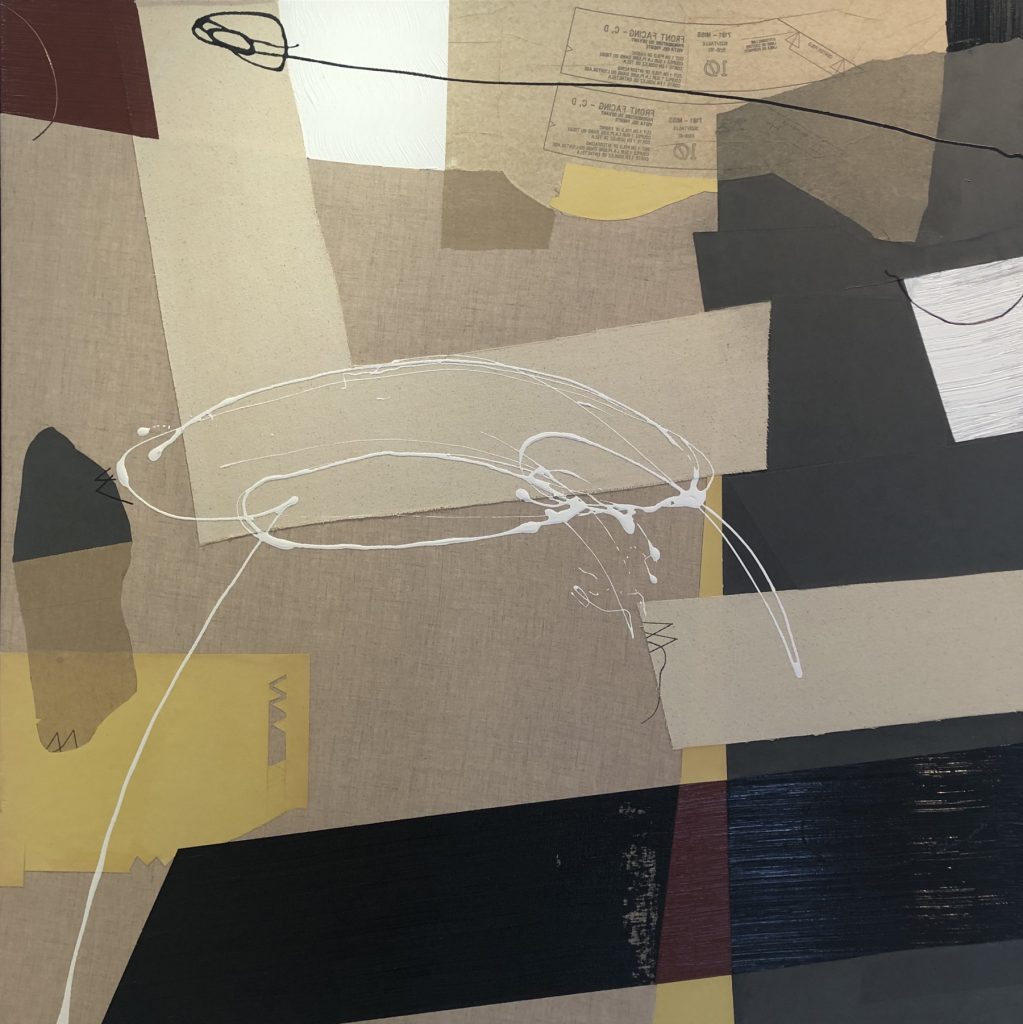 There is something fundamental that Darryl Erdmann has in common with his mixed-media artwork, “Divinations,” one of the dozen of his paintings currently on view at the 15th Street Gallery. Divinations are visions drawn from life, such as entrails read by priests of old. And just about everything in “Divinations” was something else first: a sewing pattern and the negative part of a lettering stencil can be readily identified, while other parts look to be left over from other projects. Anyone familiar with Erdmann’s life story, one he shares with many artists, should see the pattern. The son of a farmer, he grew up around Brigham City while learning to make useful and necessary things with his hands. Later he became a musician, concerned with rhythm. Then, an interest in art led him to a career in the graphic qualities of signs, which mean to communicate quickly and clearly. A fan of 1960s conceptual interiors, he later sold both high-end designer furniture and art: two forms of merchandise that tend to blend. Each of his skills employs the residue of the things he learned along the way, until he became the maker of content-rich, accessible abstractions.

In lieu of titles, some abstract painters number their works, which at least is better than a whole gallery full of paintings identically labeled “Untitled.” Others title their works with a dominant emotion they hope to evoke, like desire or yearning — which if the artist is any good should make two very different paintings — or lend the minimal identity necessary to be able to talk about them without waving their arms about and saying “the one with the big green square.” With that dilemma in mind, it’s possible that Darryl Erdmann might be hard-pressed to explain the difference between, say, “Anthem” and “Ploy” as titles for two of his abstractions. But in his case, the titles are neither meaningless nor wanting character. An anthem is an ambitious piece of music; a ploy is a determined bit of strategy. 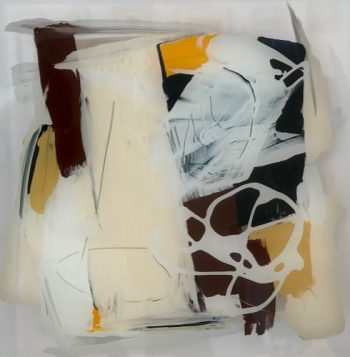 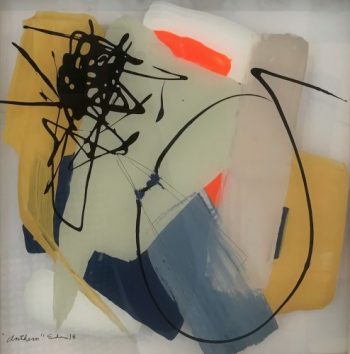 As it happens, neither “Anthem” nor “Ploy” is entirely characteristic of Erdmann’s preferred approach: his composition in depth. Take, for example, “Falling on Deaf Ears,” which, despite its overall simplicity, compellingly invokes a landscape. The lower three-quarters are black, textured and detailed but flat — for the most part. Yet it contains two seeming scratches, oblique lines that converge like the basic drawing exercise that denotes a railroad track. There’s no way to look at this composition without inverting the convention that black should recede into the background and the comparatively bright ochre above it should surge forward. To assuage any doubt, a further hint of depth is given by the shadow cast on the ochre field by a part of itself. The end result, typical with Erdmann, is an optical massage: a necessarily flat field with parts here and there that break up the rich, two-dimensional design by injecting an illusionary bit of interior space.

What differentiates “Anthem” and “Ploy” is that both are painted on glass, which is held away from the wall by their backless frames. Thus each casts a shadow of itself that can only be canceled if the viewer’s head is placed between the light source and the painting, thus lining up the paint with its double. At this point, of course, the shadow disappears: in fact, ceases to exist. While not part of the main show, these works are among the many small works that gallery manager Lucy Heller uses to exploit extra space on various walls, whence they comment on Erdmann’s more familiar works. 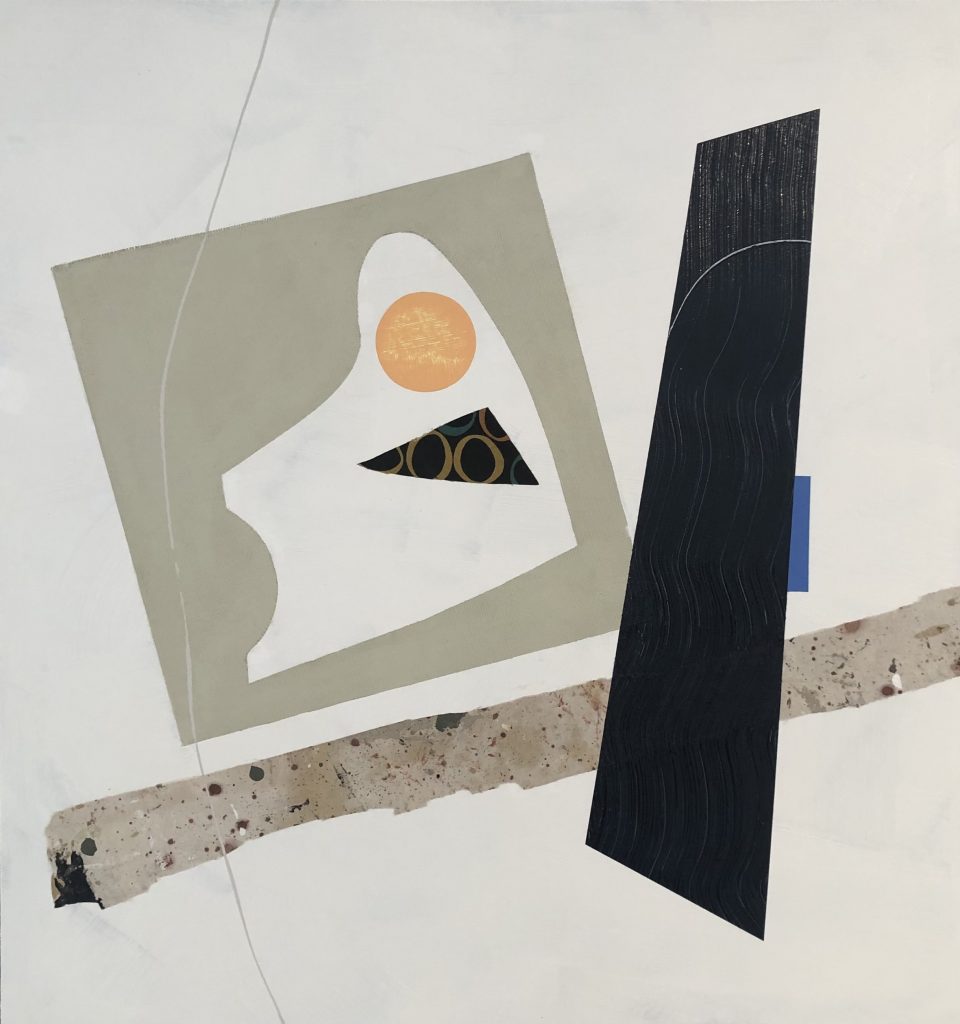 “The Molecular Structure of Civility II”

What’s particularly satisfying about the synergy between Erdmann’s paintings and his titles is that either could work without the other, but when encountered together each lends itself to support the other. The phrase, “The Molecular Structure of Civility II” enters the mind like a searchlight, illuminating thoughts and ideas. For example, who said “Common courtesy is the mortar that holds the bricks of society together?” The painted panel, meanwhile, projects an open space — a commons, perhaps — in which a gently-sloping path or ramp of spattered fabric navigates the space between two walls, one perforated and the other opaque. Their implied angles and their kinesthetic impact in the observer make for a composition that is both aesthetically pleasing—balanced and rhythmic—and meaningful. Given a nudge from the title, that meaning acquires a semantic dimension.

“Painting is a mental and physical statement about who you are and how you view the world,” Darryl Erdmann says in his artist’s statement. Thus he employs the clarity and directness that characterizes both his art and his speech to identify himself with the school of thought that argues an abstract painting is more than just another pretty face — though his images are as pleasing to the eye as they become to the mind. Asked to pick a favorite, I was able to narrow it down to five. But one of those was a triptych. 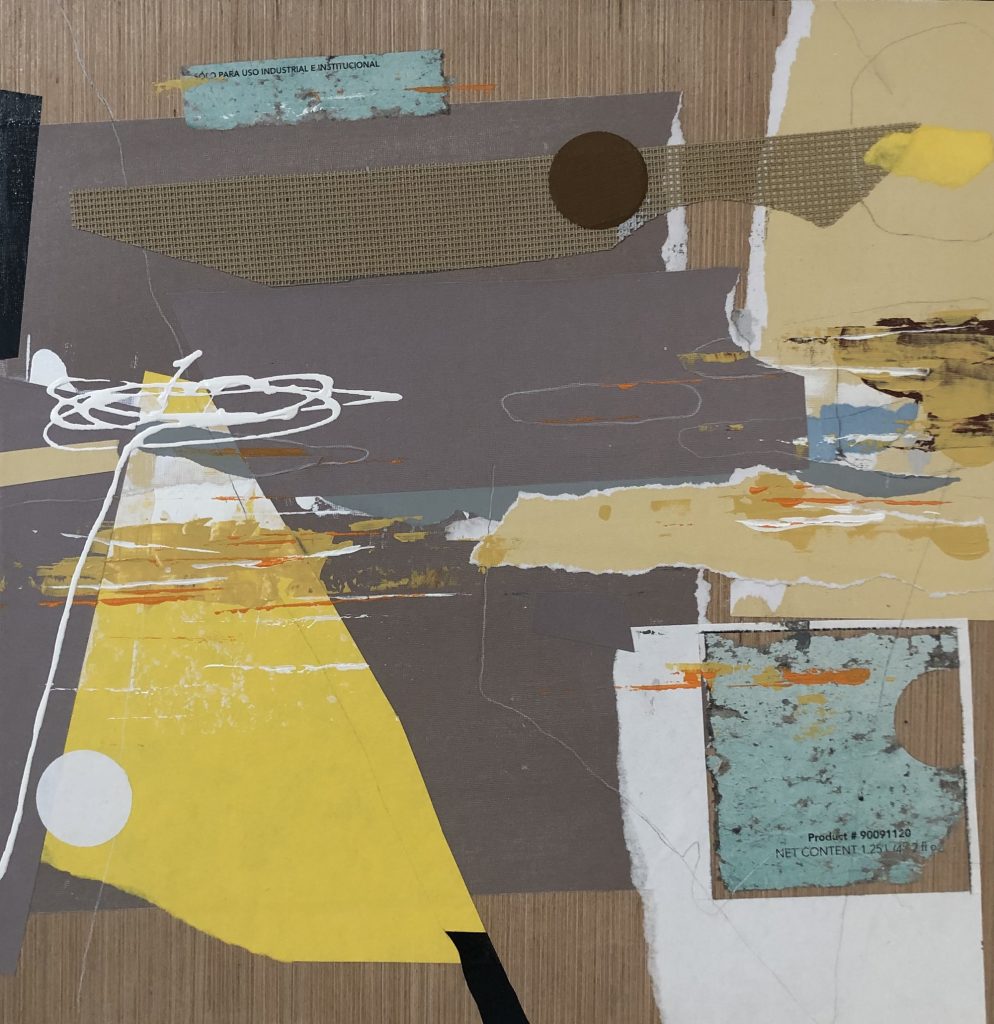