Darrell Spencer’s “Our Secret’s Out” is a Mature, Realistic Vision 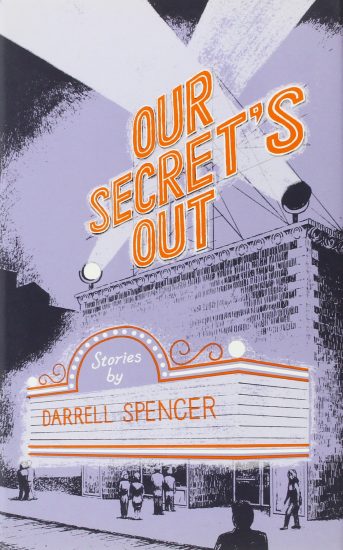 There’s something appropriate, even impressive when a newly-minted author chooses to write about auspicious beginnings, as Darrell Spencer does in the stories collected in his first book, Our Secret’s Out. When those stories go on to recount how often such promising openings falter, how anticipation of a grand future is replaced by growing awareness of finite skills, limited possibilities, even of actual, personal mediocrity, we find ourselves in the presence of a mature, realistic vision. It’s no wonder that with the publication of his first collection in 1993, Darrell Spencer was hailed by no less than François Camoin (“Stricken with all the plagues of the world, Spencer’s characters make pure poetry out of pain and grief”) and Camoin’s student, Ron Carlson (“Our Secret’s Out is full of modern men in the ‘true’ west trying—for the most part—to capture their dreams with all the wrong tools.”), whose student Spencer had become. Nor did the valedictory quality he anticipated stop there. In “Nothing Sad, Once You Look At It,” one of his heroes looks forward to a future of regrets:

Francie had a way of wrapping both her hands round a glass when she drank. A lot of people put their hands all the way around cups. You see them. They’ll be in a booth, listening or talking, killing time, and both hands are holding a cup of coffee. It’s like it’s warming them up. I’d say to Francie, A drink?, and show her a bottle, usually bourbon, and she’d get a glass and say, Two fingers. Then she’d wrap the glass up in both hands and rest its lip on her chin and talk.

Someday someone will hold a glass the way Francie did, and a picture of Francie will fly up and hit me in the face, and I won’t be able to stop it.

Voice is often everything in a short story, so that a collection of stories like this one becomes a chorus. Here each storyteller speaks primarily in his own (and it is “his”) highly personal, hipster patois, which sets up the trajectory of the story: pretty much downhill even when it starts near the bottom. What differs is what is learned. In “Song and Dance,” young Jay’s success in Junior golf tournaments leads him to imagine a dominating career as a Pro, only to have his senior family members take him down, gently at first but more firmly when he resists the lesson. By the final story, the work they offered Jay, in the sort of entry-level retail they think will give him a firm foundation in the discipline of work, will have become a career for an anonymous narrator, and the 7-11 where he trades off graveyard hours a suitable setting for tales of sex and death in the working class:

I’ve got two hours before work, so I drive out to Lake Mead, swing around to the far side away from the Marina. I wade out up to my knees. The water is flat as a stone, and the moon is up and full. It’s the color of Jane’s pearls. It’s the shape of her collar.

The reference is dated: Lake Mead no longer has enough water to wade in, so what was once a lonely scene now lends an all-but-universal quality to these tales of crumbling consequences. Too easy success in the morning leads to hubris in the afternoon, which lasts just long enough for nemesis to arrive to do the work of ending up the day.

“Acting is acting,” Walt says in the title story: “Not thinking. You’ve got to empty your mind.’”The same thing can be and often is said about writing, painting, sculpting, drawing, and so on. Not so of shopping for supplies or being sure the studio is ready. There is difference between being in the groove and taking care of business. Some people belong entirely on one side or the other of the divide:

She zips his mouth shut and throws away the key. Under a book is the Chinese green. The lid’s off, and it’s dried out. She can make do. She’ll mix colors. She says, “Don’t talk.” He’s dressed for the two o’clock Saturday show, and Lola’s making him up.This is theater, but it’s semi-pro theater, and there is no money for make-up people. She lays in a moss-green foundation, then blue-green under his eyes. A light green raises his eyebrows into the goggle-eyed look he wants. She mixes a color close to Chinese Green and fans it across his cheeks. Her final touch is one red dot in the corner of each eye up against Walt’s nose.

All those who ever thought they were something special, only to discover that if the pond is small enough everyone feels they’re a big fish, and that talent is only the beginning of a lifetime of stumbling into limits, may well wish they’d had this book sooner. Of course reading is one thing: recognizing yourself in the mirror is another. The secret, all our secret, is out: we’re only young, with money in our veins, for 15 minutes, and the illusion then may be the closest to greatness we’ll ever get.

It’s not possible to tell from this first book how much of Darrell Spencer’s potential he would go on to achieve. While writing four more books — short stories, linked short stories, and a novel — he taught at Ohio State until his recent retirement. He now teaches writing at Southern Utah University.