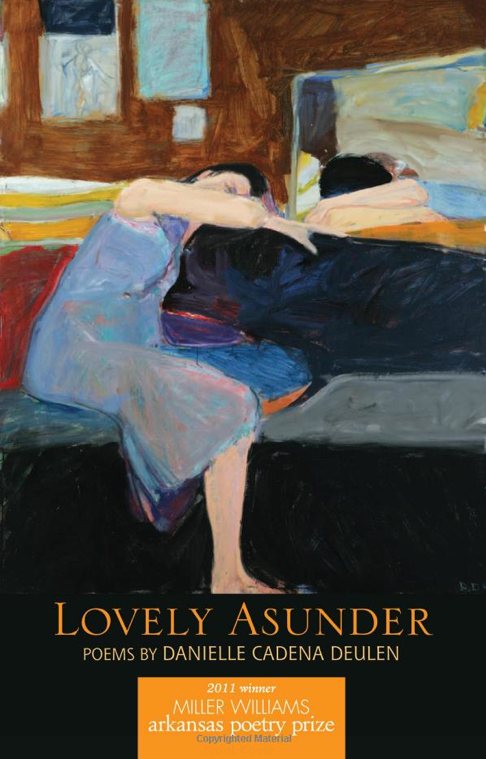 Lovely Asunder, the first collection of poetry by Danielle Cadena Deulen, a 2011 Utah Book Award finalist, is inquisitive—the first poem, “Interrogation,” is composed entirely in questions. As the book progresses, inquiries move from the concrete: “How did you get here in the wet garden/ on your bloody knees, and where is/your mothers brown dress smelling/ of nickels and butter?” to the abstract: “…tell me that this life/ isn’t a loosed gyre—/…tell me/ you didn’t mean forever.” Deulen, however, poses her questions in a way that the reader does not feel interrogated, but rather, reflective. She also blends a mixture of mythologies, lush imagery, and narrative poetry to create a collection that is haunting, memorable, and enjoyable to read over and over again.

Embedded in the poems of Lovely Asunder are nods to Greek, Roman, and Christian myths. The familiar stories, however, don’t feel stale—Deulen has a fresh, sometimes sarcastic, take on all of them. The best example of this is found in “When Pandora Opened Her Box, She Found,” where Deulen turns the myth on its head in a very deliberate fashion, ending with a line that spits at the commonly held perception of Pandora: “And after, of course, the gods had someone to blame.” It is a thought that resonates with the reader long after the poem has been read.

Similarly, images of fruit are plentiful in the collection, among them lemons, papayas, figs, and pomegranates, but the images are not cliché nor sentimental. Rather, they are lush, evoking a sense of femininity and sexuality. For example, the poem “Papaya” reads, “…the wild papayas hanging low/ in the branches outside her window beg her/ to slice them open so she might plunge her fingers into the pool of black seeds, leave/ the sweet flesh bare in the light.” The imagery fuels a very sensual feel to the poems, which is especially interesting when contrasted with heavy, melancholy subjects.

The voice of the collection is narrative, with memories and mythologies intersecting to create interesting parallels. Poems are constructed both organically and formally, which is refreshing—there is no singular poetry style, but rather a variety of styles connected by theme and images. Even the “traditional” styles twist and push the constraints of the norm. For example, “Pastoral” is not the pastoral taught to beginning poetry classes, but rather, one that collides harsh imagery of a cruel sun with sensual imagery of pulp being spread over bodies.  While unexpected, the result is a poem that defies traditional standards and stays in the memory of the reader, which can be said about the collection as a whole.

Lovely Asunder does well at blending multiple narratives, mythologies, and images. It evokes the feeling of a hothouse garden filled with humidity, exotic plants, and trees hanging low with fruit. The words are sticky like the fruits that are continually halved and sliced throughout the collection, and they stay with the reader long after they have been consumed.

Danielle Cadena Deulen’s Lovely Asunder, published by the University of Arkansas Press,  is a 2011 Utah Book Award Finalist in the Poetry category. Winners of the award will be announced October

Caitlin Erickson hails from Salt Lake City, Utah. She currently resides in Logan, Utah and attends Utah State University, where she is pursuing a MA in Literature and Writing with a poetry emphasis.