Daniel George is a photographic artist whose work is rooted in the medium’s documentary tradition and explores the interconnection of place and culture as it relates to communal and personal identity. Having lived as a transplant in various locations throughout his adult life, he uses the camera to study defining characteristics of the communities within which he resides. The resulting photographs are his attempt to visualize and understand the idiosyncrasies of human activity in these local cultures. Daniel’s work has been exhibited in solo and group exhibitions across the United States, and has been published internationally in both print and online publications. He is currently based out of Vineyard, UT where he teaches at nearby Brigham Young University.

Artist Statement
God to Go West explores the contemporary landscape of Utah in relationship to the state’s religious history. After their arrival to the area in the mid-1800’s, Mormon settlers named more places and geographic features than any other group or people–directly referencing their books of scripture, the Bible and the Book of Mormon. Because names have the ability to mediate qualities and meaning attached to a place and are a vital part of individual and collective memory and identity, it is evident that their intention was to create a utopia by association. My photographs are an investigation of this romanticized notion, and the effect that language, religion, and history has had on land use and interpretation in this region of the country. In the visual tradition of the Western photographic surveys, I am documenting a place that is paradoxically defined by idyllic optimism, and characterized by unavoidable incongruity. 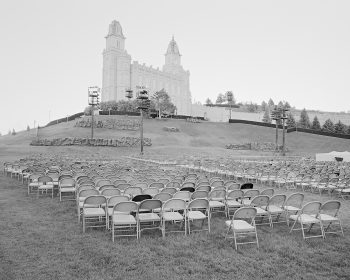 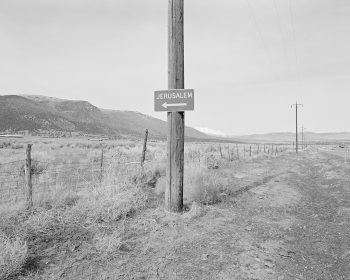