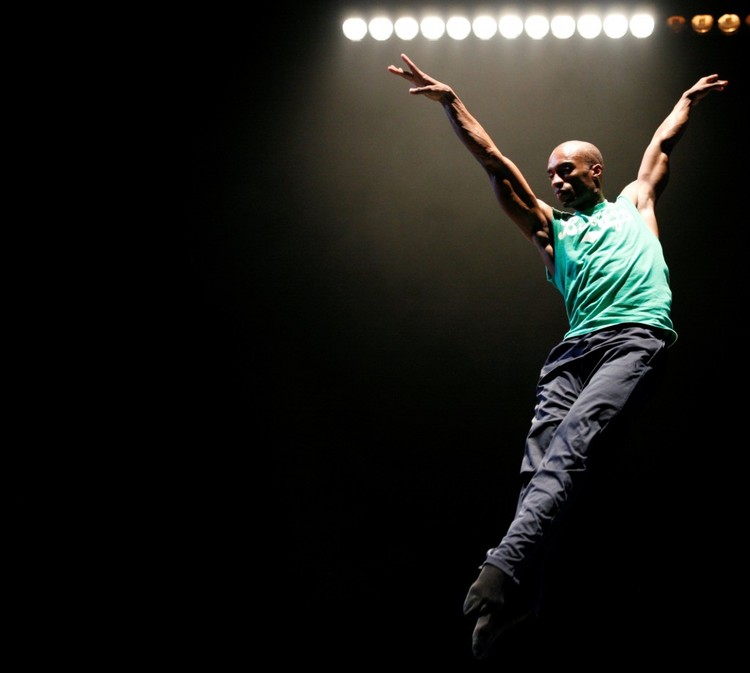 The company performed an excerpt from “Cryin’ to Cry Out,” choreographed by resident choreographer Dwight Rhoden. The duet features a man and woman standing in spotlights on opposite sides of the stage. The two dance simultaneously, but not together. They remain on their opposite sides, signifying separation. Focusing internally, they express emotions that are desperate to come out but that have to be borne alone.

“Gone” tells the story of three lonely and destitute men who find camaraderie with one another. Smoky lighting keeps the men in hazy silhouettes for the entirety of the dance, giving an ominous, hopeless feeling. The shadowy figures repeat forceful arm movements to rhythmic clapping and gospel vocals. As the men dance individually, this repetitive motion is the thread that ties them all together in a strengthening brotherhood—a sign of belonging and survival.

The show wrapped up with Rhoden’s 30-minute “Ballad Unto…” which just had its Complexions premiere in October of last year. Performed by all 13 members of the company, “Ballad Unto…” is a powerful note to end on. The bold piece demonstrates the explosive movement of seven couples. The choreography alternates between women and men group movement and then explores pas de deux work. The audience witnessed how the couples come together in an “intimate abstraction of love” (program excerpt).

Complexions Contemporary Ballet put on an exhilarating hourlong show with original and creative movement that never stopped pushing boundaries and always gave the audience something new to see. 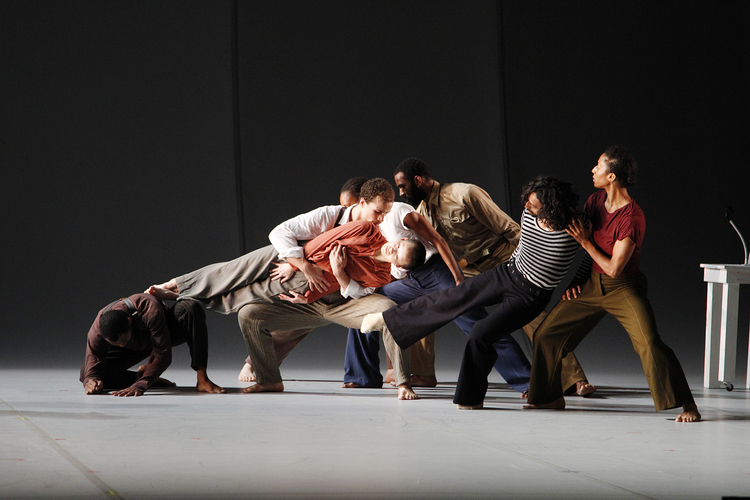 Six panels of white marley hang in front of the traveler at the back of the stage.
They begin to skim the floor and cover a central space without quite reaching the lip.
Interlocking foam shapes lay waiting.
So does a small white table with carefully placed microphones.
The physical and electronic instruments of Nick Hallett and Emily Manzo are to the right. Company members are invisible, preparing and bracing for a dance in new altitude.

It was a dream for Park City Institute director Teri Orr as she stood before the Eccles Center audience sharing the many attempts that got Bill T. Jones/Arnie Zane Dance Company to Park City. As the show began, Jones took the stage to introduce “Analogy/Dora: Tramontane.” More disarming than a descriptive program, a choreographer inviting you to share in material is an excellent way to begin.

In his introduction Jones described how he came to interview Dora Amelan about her experiences in World War II. Dora’s son, Bjorn Amelan, is the decor designer for “Analogy/Dora” and recently married to Jones; in Jones’ retelling, Bjorn began to notice that as Dora aged, new stories emerged conversationally. Jones is no stranger to telling stories, particularly those of individuals moving through trial or tragedy, his body of work existing very much in relationship to broad social histories.*

“Analogy/Dora…” begins with dancers creating tableaus by manipulating the interlocking foam pieces. The foam shapes form windows, doorways, roofs and other boundaries. Some of these tableaus could have been lifted from Jones’ other works, many including the same sizeable narrative arcs and containing equally abstract, precise and formal movement.

As the dance proceeds, the foam pieces continue intermittent transitions but are accompanied by interview texts. For an avid dancegoer, it’s easy to recount a handful of pieces in this vein, most accompanied by a muffled recording or a singular and heavy monologue. Jones’ strategy is different, and more compelling: the dancers trade roles of Dora and Jones, allowing her storytelling to ripple among the cast. This method of delivery also simulates the architecture onstage, reaching the audience in a collective manner. When the story is displaced from its origins (a single Jewish teenager in France), the diversity of the cast in both race and physicality contributes to the concept of a shared narrative. The company makeup also lends itself toward the second and third installments of “Analogy,” which is a proposed trilogy exploring different personal histories.

Both the content and shared telling are at times didactic but at other times revelatory as the audience assigns how a narrative unfolds given our own assumptions and experiences. For example, one may bristle depending on which company member is the Gestapo, which is Dora’s sister in the hospital after a failed abortion, which is a parent, or which is Dora herself. The architecture also crosses into potential pedanticism because the pieces could have been, although they were not, placed in the form of a swastika. This line between instructive and illuminating is one Jones’ work often straddles whether for better or worse.

Throughout “Analogy,” a live score includes traditional French and German songs and periodically interrupts the text with electronic music, allowing Jones’ signature movements to take center stage. These moving sections were striking as they exacerbated tension through full-bodied vibrations and dispelled the same tension through sweeping yet distilled phrase material.

Met with a standing ovation, “Analogy/Dora” clearly reached its audience. As I exited through the expansive theater I remained curious not just about the work itself but also about the mode of presentation on the Wasatch Front. Most of my peers were ambling to their cars and heading back to Salt Lake or Utah counties. The Eccles Theatre beautifully framed the work, but I wonder how vital dances by iconic choreographers could be more effectively presented by participation among additional arts partners.

*Most recently the company tackled the history of Lincoln which, along with another earlier take on Uncle Tom’s Cabin, has been documented by PBS, extending their documentation to broad audiences. The company has also created numerous works exploring the AIDS epidemic and terminal illness including “Still/Here,” which sparked a “victim art” debate after New Yorker critic Arlene Croce refused to review the piece.