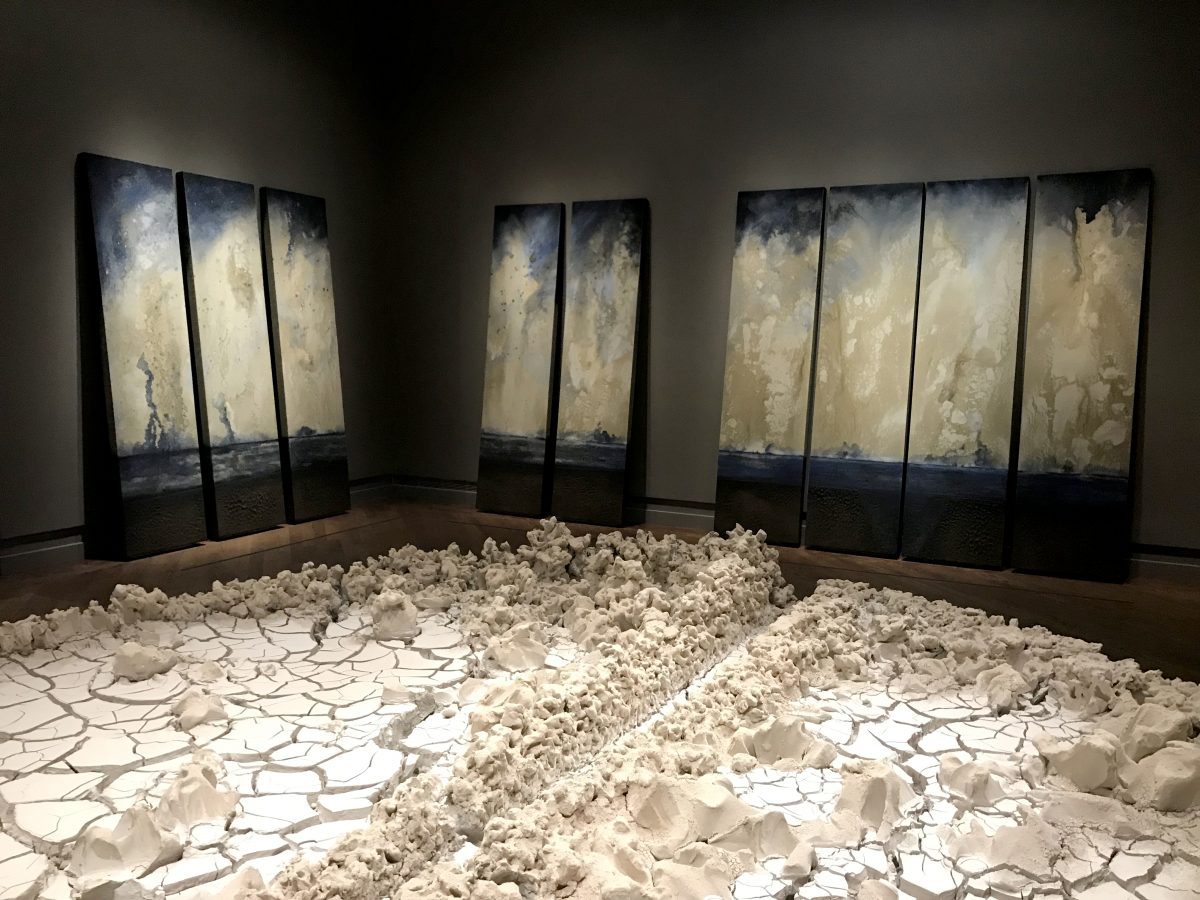 The dynamism of the natural world surrounds us: we are part of systems that grow and decay, process and alter on a continual basis. Nothing is static as matter and substance morph sometimes imperceptibly, and sometimes so dramatically it’s jarring to witness. These changes are at the heart of Danae Mattes’ current exhibition, Where the River Widens at BYU’s Museum of Art. Each work, whether constructed on the ground, suspended from the ceiling, or hanging on the walls presents worlds that draw us into sensory experiences of memory: memory of landscapes, of outdoor activities feeling water and mud glide between our toes, running our fingers over the cracks of mud dried in the hot summer sun. Mattes evokes and adds to our memories through the rich colors of the land and sky that surrounds us. 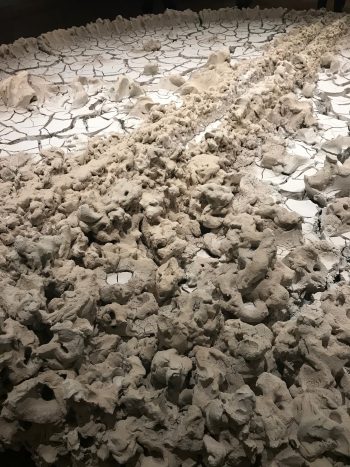 Mattes’ central, dramatic work is the circular installation “Evaporation Pool X.” Time-lapse videos on both the museum’s and the artist’s websites present us with the artist in action, working with volunteers to create a clay-based platform. Multiple videos on YouTube provide bursts of activity during the creation of the platform, while more recent videos hark back to the seemingly slow process of nature’s changes. Mattes guides her material so it takes on its own process of change: as water is added to the clay bed, and dries, the bed is activated and the process of entropy, the gradual shift from order to disorder, ensues.

The pool is dramatic in its beauty and physicality, certainly for those of us who live in Western states and observe the fissures and cracks of dried river beds: we need look no further than to Great Salt Lake and its many desiccated micro-regions that have dried up due to drought. The effects of drought in the physical world are much starker than presented in a gallery setting, though, and can’t be observed passively. It’s one thing to see this process as art, another to experience its impact in the real world.

“Evaporation Pool X” is surrounded by “Sonnet,” 14 panels in brown and blue propped against the wall to serve as sentinels, vertical markers that lift up the horizontality of the pool. We are in effect surrounded by ground: clay that is used to mimic land, that represents land and becomes — from the ground up — the sky. The gallery space contains additional works, including the large-format “Alluvial Interiors IV” (2007), a related work of desiccated clay on paper that serves as a stark, potentially cautionary tale of drought through a monochromatic palette. 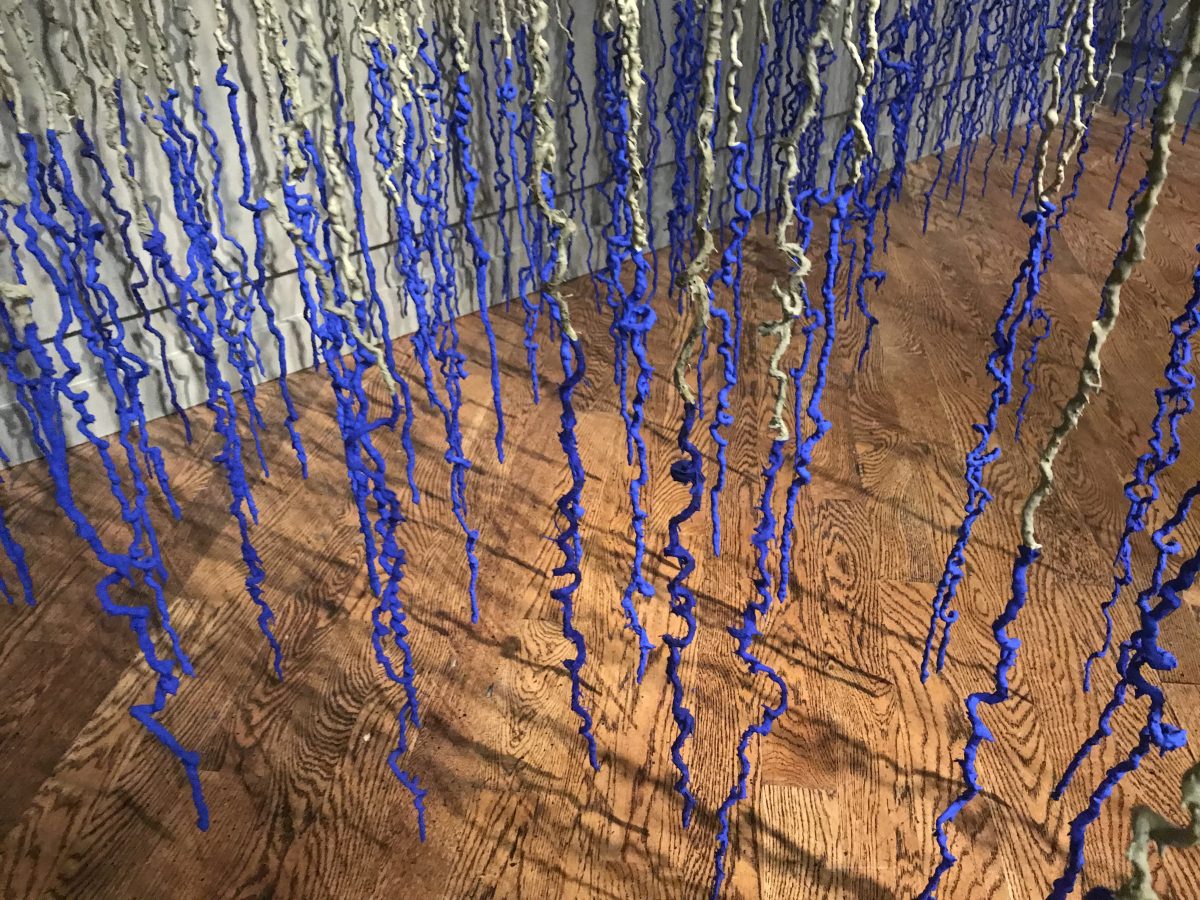 A second gallery is filled with more large-format works and the installation, “River Fold” (2018, mixed media). The museum’s curator/head of education Janalee Emmer says that Mattes’ process of melding wire, clay, and pigment (startling cobalt blue) establishes a space that viewers can experience based on their own time and meandering movements. While each strand is hung in a regimented pattern, there is an ethereal quality to the piece: The top of each wire is almost invisible given the bright, almost white coloration of the clay, while the cobalt tips draw the viewers’ eye to the floor and tension created between color, space, movement, and rest.

A wall piece, “Passage II” (2013, clay, paper, pigment on canvas), draws an immediate, visceral response. Its beauty is otherworldly and startling as landscape and skyscape are rendered through sheer abstraction. The materiality of the canvas’ surface is complex, evoking decay, ruin, and layers of entropy rendered minutely. This work is the embodiment of the sublime, depicting a world both beautiful and frightening, one we can’t help but enter knowing it contains equal measures of darkness and light. One recalls the British artist J.M.W. Turner’s later abstractions, and in a more complex comparison, a close read of this canvas resembles up-close views of American artist Richard Serra’s steel slabs in their rough beauty.

Mattes’ work is presented in conjunction with another long-term installation, “Windswept” by Patrick Dougherty. The synergistic play between each artists’ work is expertly orchestrated by the museum’s curators: nature in its various forms, vertical and horizontal, still and soaring in space. Adjacent to both installations is a research room that places their works within the context of the Earth art movement. Through eight large didactic panels (including “Dissolutions of Boundaries,” “Land Art: Beginnings,” and “Time and Entropy”) and two videos from PBS Digital Studio’s excellent program “The Art Assignment” (“Art Trip: Utah” and “The Case for Land Art”), museum visitors can realize their experience of the museum’s installations within the context of the broader movements that led to contemporary considerations of working with natural materials. 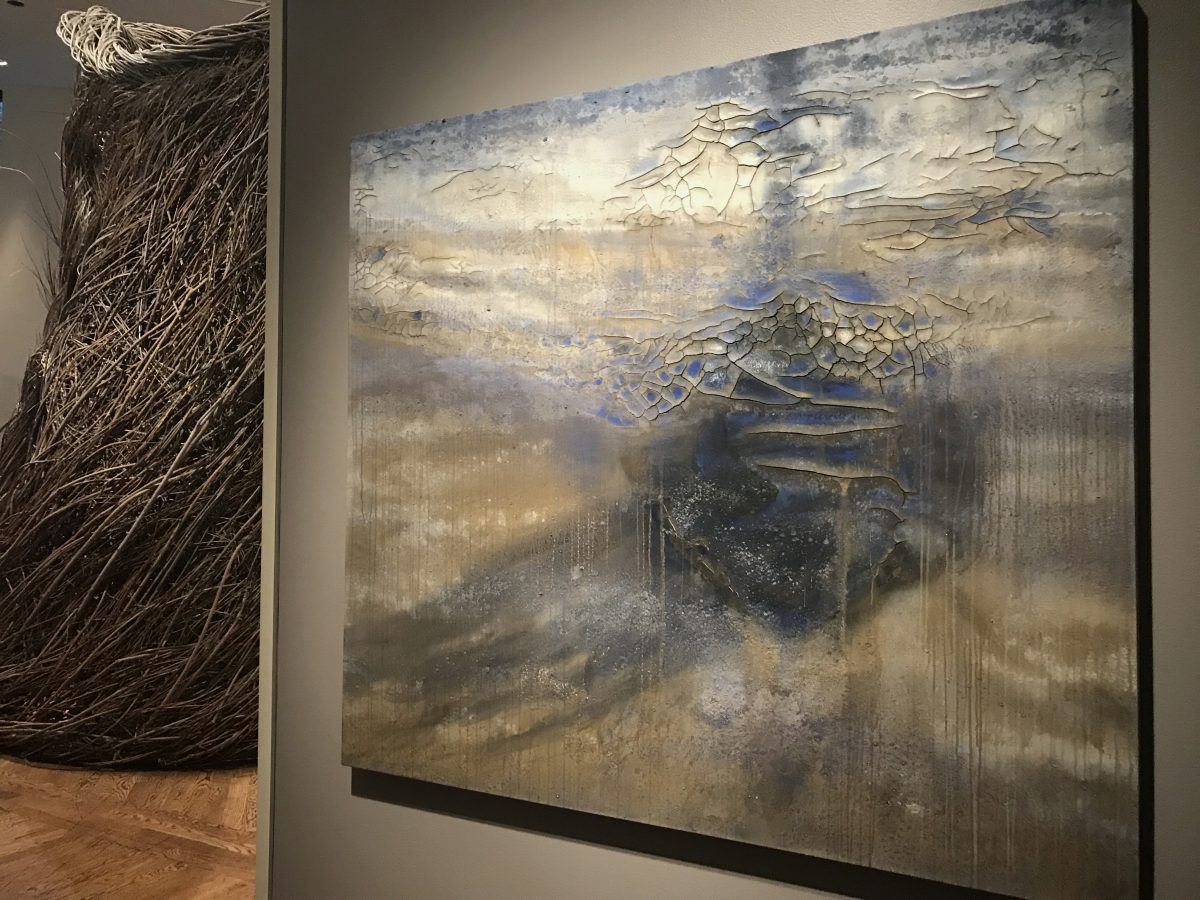 Danae Mattes’ “Resrvoir,” clay, paper and pigment on canvas, 2014, with a view of Patrick Dougherty’s “Windswept”

Where the River Widens, installations and other works by Danae Mattes, and Windswept, an installation by Patrick Dougherty, Brigham Young University Museum of Art, Provo, through October 19.