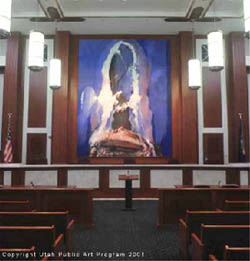 “Capitol Reef” actually belongs to the state’s public art collection. This controversial painting was installed in the State Court House in 1997. The committee in charge of choosing the piece met several times with the artist and the architect prior to its installation (as is the case with many public art projects). Two Supreme Court judges were on this committee and assisted in the process, but Judge Richard C. Howe was opposed to the piece.

Howe believed the painting was distracting and “not appropriate to the proceedings of the court.” This opposition triggered much controversy and a series of debates ensued. Howe wanted the piece removed, but it would be impossible to take it down without destroying it. In 2002, a decision was finally made to put up a curtain to cover the painting while court is in session. When court is not in session, they draw the curtain, uncovering the abstract painting. This “solution” was an expensive one as the curtain cost the state $26,000 to make and install. Howe retired in February 2003.