Curation as Creative Think Tank: Hikmet Sidney Loe’s “The Center Can Not Hold” 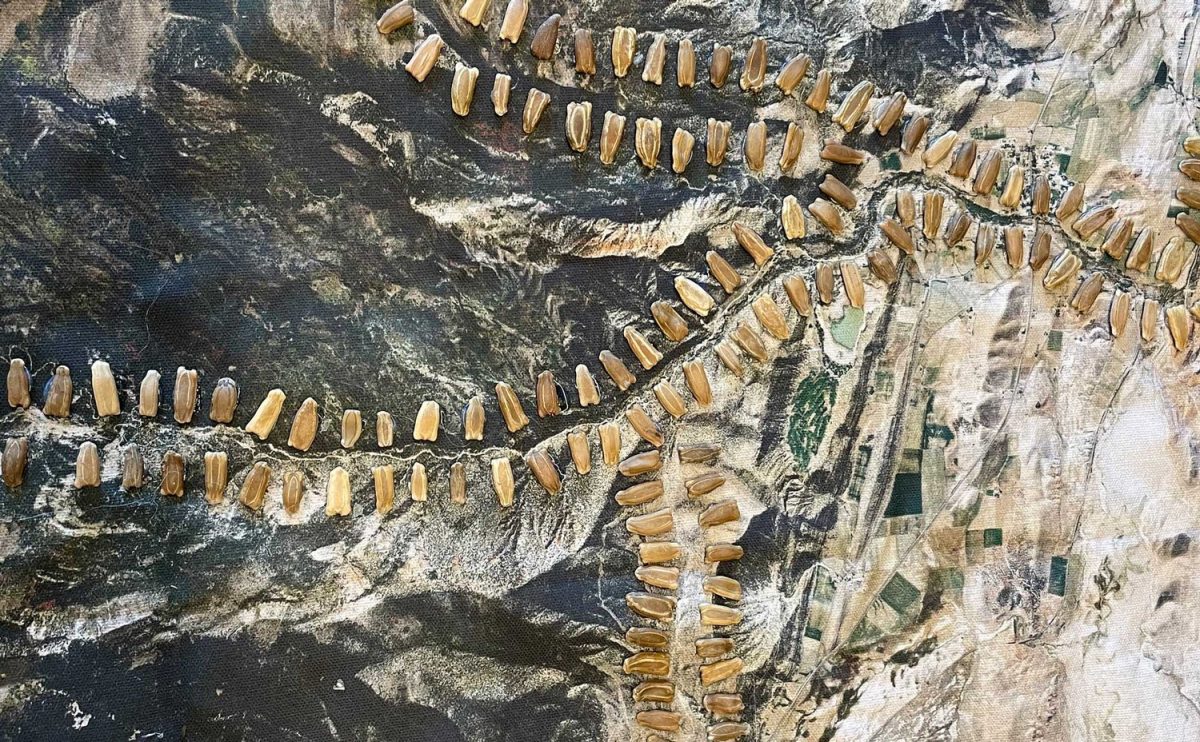 Detail from the inside of Anne Mooney and John Sparano’s “carto•graphic, aerial 02 installation”

Hikmet Sidney Loe left in the summer of 2021. Left Utah, that is. Moved her residence 385 miles south to Nevada, where she now teaches in the art history department at the University of Nevada Las Vegas. Left Salt Lake City, where she had lived for decades, working as a librarian, adjunct art history professor, a writer, researcher and Land Art expert. Left, we say, because in moving that far south she crossed a political boundary, crossed a specific semantic framework dating back to the era of Manifest Destiny.

In a sense, though, she has remained: her range may have expanded but her pursuits are still rooted in the desert West. Remained, also, because those pursuits have also meant returns: to Salt Lake City last summer to teach at the University of Utah, and this fall to Ephraim to curate an exhibit at Granary Arts.

In September 2021, when Granary Arts’ executive director Amy Jorgensen invited Loe to curate an exhibition centered on architects creating contemporary art related to the idea of place, Loe welcomed the concept: she was already familiar with architects who worked as artists and the idea of place … well that’s her specialty. Instead of coming up with a specific theme to direct the participating artists, Loe decided to create a “collaborative think tank,” as she describes it: curator and artists would meet twice a month to talk through their ideas for an exhibition and see what happens.

During this incubation period Loe was reading a Facebook post by artist Rebecca Salmon. “I can’t remember now what the post was about,” she says, ”but a line stuck out to me: ‘The center cannot hold.’” Loe mentioned the reference at the group’s next meeting, and Hannah Vaughn not only identified it as a line by Yeats, but began reciting the poem. 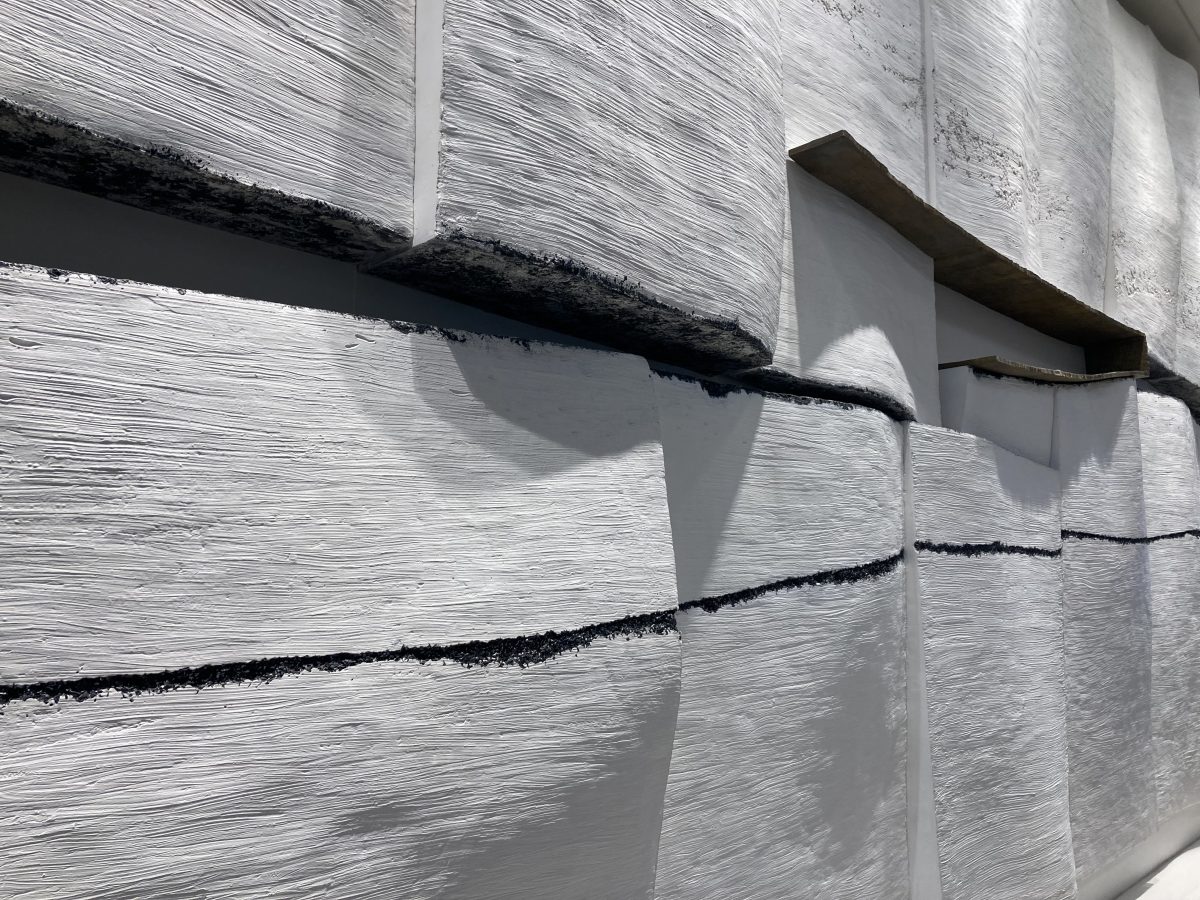 A Salt Lake City architect and educator, Vaughn cofounded VY Architecture (Utah and Idaho) and teaches design at the University of Utah School of Architecture. Her interests in place and the manipulation of materials have resulted in various performances, sculptures and installations — you may remember her work from Finch Lane’s “9 Territories” exhibit in 2015, or seen her recently created mural on your way out of security at the Salt Lake City airport. She was joined in Loe’s “think tank” by Anne Mooney and John Sparano of Sparano + Mooney Architecture. Like Vaughan, Mooney teaches at the U’s Architecture department and both she and Sparano have been recognized for their outstanding design work in the Intermountain West.

Yeats’ line, Loe says, became the idea that drove the group’s discussions. While Ephraim is at the geographic center of the state, the state of Utah is a relatively recent political construct, and Ephraim was not a geographic center for the Indigenous people of what we now call Utah. The group, according to Loe, asked: “What does it mean to be the center? Ephraim is the center, but for whom?” As the group’s discussion coalesced around this theme, Loe suggested the exhibit should be a “sandbox” for the architects/artists to explore their own personal interpretations. 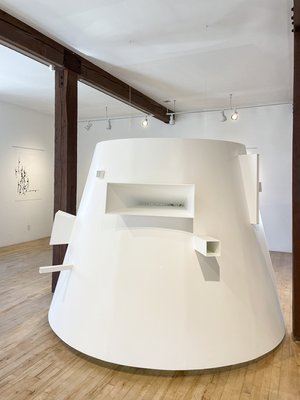 As part of their architectural practice, Mooney and Sparano create sculptural objects. “They call them ‘conceptual constructs,’” Loe explains. “They help them work through ideas with their teams towards realizing a project.” For The Granary exhibit they have created one of these objects, a white structure which resembles a NASA return capsule, with various openings. Through these, a viewer is given an always partial vision of the inside, where a series of maps, based on the Jeffersonian grid system, have been layered with and obstructed by seeds, representing the original food stuffs of the Indigenous people.

Vaughn’s work also deals with layers: “… layers of time, layers of motion, layers of thought, layers of place,” as Loe describes them. She works with different casts of wood and paper casts embedded with thin layers of organic matter and skeletal remains, revealing a concept of place as an expansion of time.

“These are really professional, top-of-their-game, seasoned architects who can think conceptually and work artistically” Loe says. The direction of the group’s discussions was mostly intellectual, conceptual. Little was said of the actual objects themselves; which is why Loe was surprised and intrigued by the resulting aesthetic unity of the exhibit. “There’s a sense of whiteness, of the materials, which I think is fascinating within the whiteness of the gallery … To me there’s a sort of solemn quality.” These sort of observations are the sort of thing that will crop up in Loe’s thinking, germinate and sprout up in some future project. 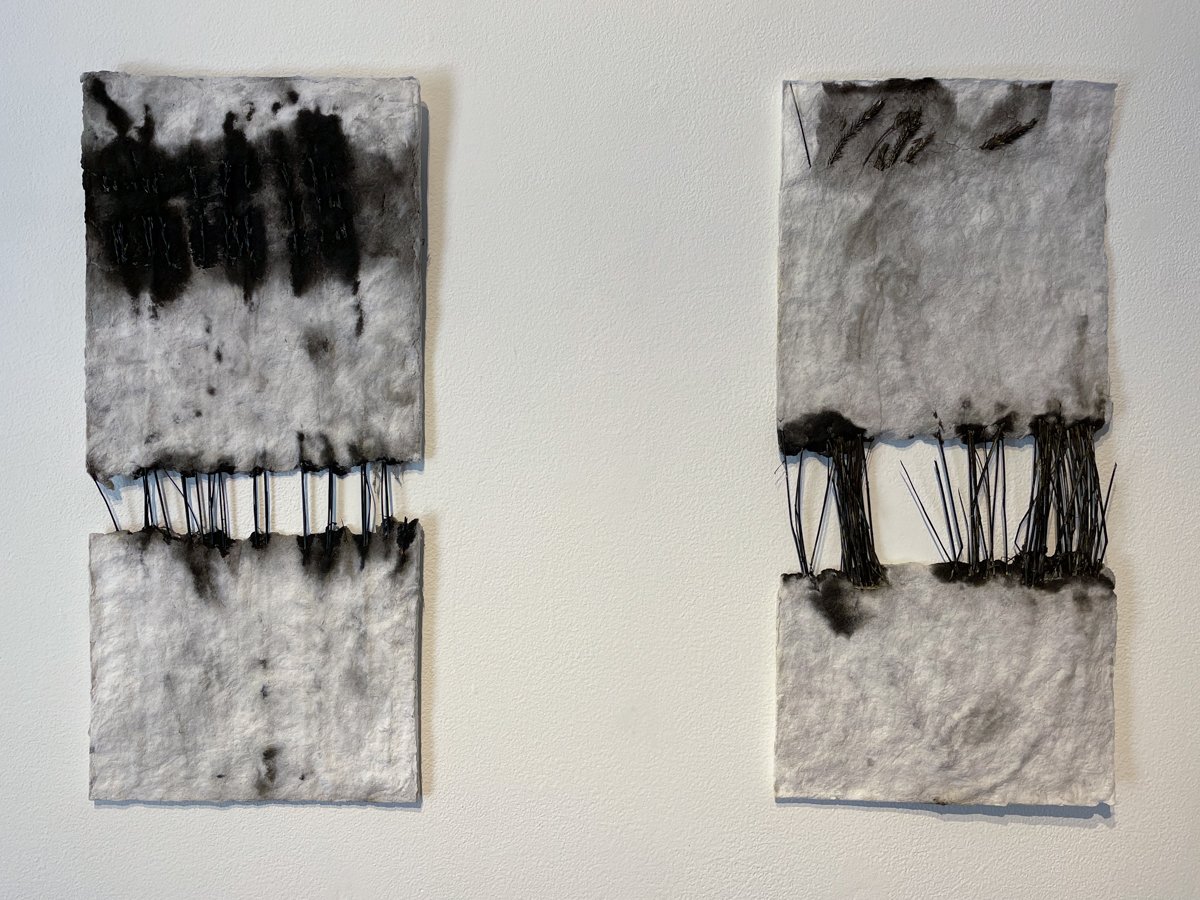 Loe is always juggling multiple projects. In addition to her teaching endeavors at UNLV, she has been traveling across the Intermountain West, visiting sites like the Sun Tunnels, Butte Montana’s Berkeley Pit and Michael Heizer’s Double Negative. She’s working on her new book project, “The Sun Tunnels Encyclo: Exploring Nancy Holt’s Earthwork through Perception and Site.” And with Katie Hoffman, president of Nevadans for Cultural Preservation, she’s curating an exhibit of contemporary artists engaging with Land Art in the Las Vegas area.

“A curator can be many things,” Loe says, remarking that each time she curates or co-curates an exhibit at a different venue, her approach may change. “It’s not a cookie-cutter idea, and what I have valued so much with the exhibit at Granary right now and working with Ann, John and Hannah is this openness to want to think through ideas, the openness to want to have this think tank.”

Loe visited the Granary Arts exhibit in November, and is returning virtually this month to participate in a symposium on the exhibit with Mooney, Sparano, Vaughn, Aurora Tang and moderator Amy Jorgensen. The symposium will be held via Zoom Thursday at 6:30. (Please RSVP on Eventbrite to attend. Zoom Meeting ID and Passcode will be emailed to you.)

The Center Can Not Hold, Curated by Hikmet Sidney Loe, Granary Arts, Ephraim, through Jan. 20