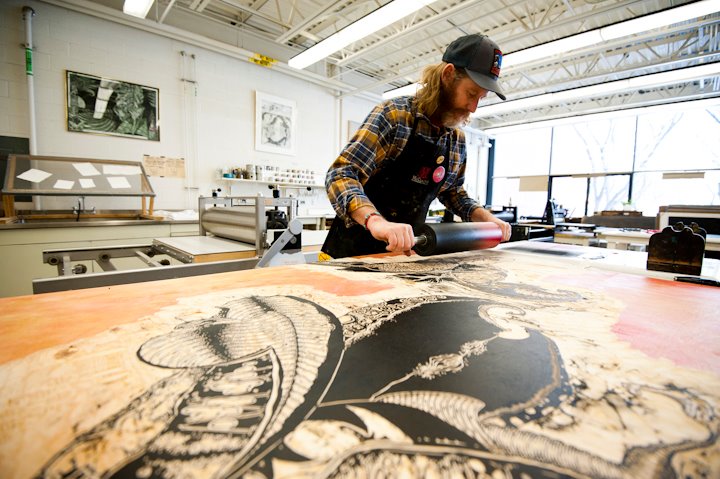 For the first time since the 1980s, Dixie State University’s art department will be offering an introductory course in printmaking in the fall and adjunct Professor Abraham McCowan has big hopes for what it will mean about the future of printmaking in southern Utah. “I have a lot of non-students wanting to participate,” he says.

In a show at Dixie University’s North Plaza Gallery, the St. George native is currently exhibiting a series of mixed-media drawings, but his real love is printmaking, something he discovered as an undergrad at Northland College in Ashland, Wisconsin. He found the attitude toward printmaking in the East markedly different than in the West, particularly Utah.  “Out East, printmaking is it,” McCowan says. “They’re nuts about it.”

McCowan became drawn to woodblock printmaking. The direct nature of the medium as well as the meditative gesture of carving appealed to him. That preference was cemented when he was introduced to printmakers Tom Huck and Karen Kunc at a Southern Graphics Council Conference in 2007. Both were doing large-scale relief printmaking, and McCowan was impressed by Kunc’s work, especially. “[Kunc] changed what I thought was possible in printmaking,” McCowan says.

McCowan’s large botanicals, some of which were on exhibit last year at Salt Lake City’s Saltgrass Printmakers, are more expressive than illustrative, and exhibit a curious wonder of the strange and diverse plants of the Sonoran and Mojave deserts. His graphic style has a writhing quality, with the details of the plants embellished and exaggerated by McCowan’s own imagination. “Desert plants, especially in the Sonoran Desert, are animated,” McCowan says. “The saguaros with their arms twisting around each other, the organ pipe cactus… The desert is a crazy, sacred, beautiful place.”

Still wanting to work big, but without access to a large press since finishing graduate school, McCowan has turned to mixed-media drawings on paper mounted on wood panels. As we see in the DSU exhibit entitled Thunder Crashing Above Us, which also features Cache Valley artist Lisie Beck Brundage, McCowan’s new works are more gestural, more spontaneous. While woodcuts are still present, most are small, almost studies, with a few botanicals floating amid nonobjective works. “The little woodcuts are informing the big drawings right now, rather than the other way around,” McCowan explains. While he hopes to return to large format printmaking, he feels that the mixed media offers an opportunity to explore mark-making. It will be interesting to see where this experimentation leads when McCowan gets around a large press again.

It is hard not to think of parallels between the tenacious desert flora that inspire McCowan’s graphic oeuvre and his own perseverance as an advocate of printmaking. Despite a strong tradition of landscape and realism in St. George, McCowan believes there is a need and a place for artists who are outside of that mold, and cited recent efforts by various St. George-area printmakers to network with one another via social media. McCowan is also reaching out to printmakers in Kanab, and will be teaching a relief printmaking workshop and showing at Raven’s Heart Gallery there in the summer. With printmakers coming out of the woodwork, so to speak, Mccowan hopes a printmaking studio will evolve in St. George. “I definitely think we could have something like Saltgrass in St. George,” he says. “Teaching a course on printmaking is a good start.”

Here’s hoping his words turn out to be prophetic. 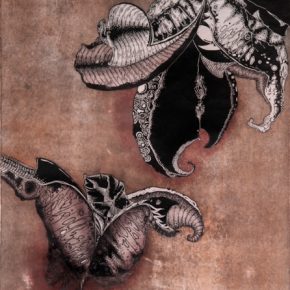 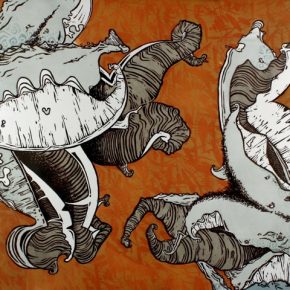 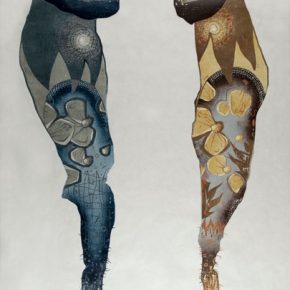 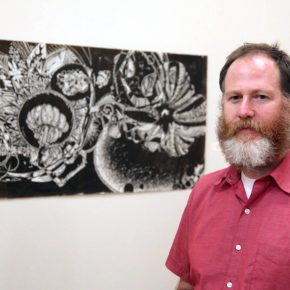 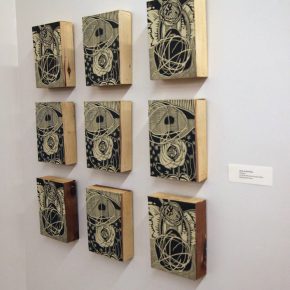 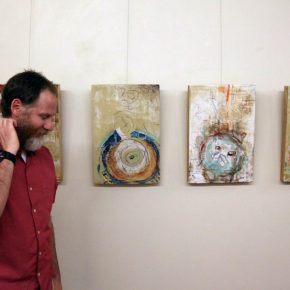 Thunder Crashing Above Us, featuring the work of Abraham McCowan and Lisie Beck Brundage, is at the Dixie State University North Plaza Art Gallery (50 South 950 East, St. George) through March 16.