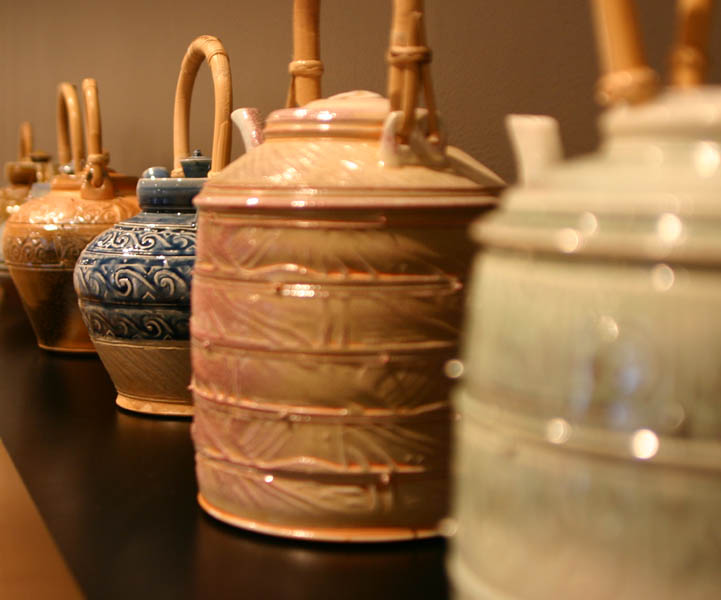 Someone once said that, “pottery is as old as the human soul.” The need to carry and store the most fundamental items necessary to sustain life has dictated the need for containers. At the outset of human history, the most fundamental containers were pots, as evidenced in the collections of the world’s finest to most humble museums.

Although designs and forms have changed over the millennia, all pots start the same way — extracting clay from the earth and water from the clay through the fires of the kiln and the potter’s imagination.

Susan Harris’s imagination is most piqued by ancient Chinese culture, although she is a student of worldwide art. Pottery is her link with humanity and other artists, an affinity that for her spans time and topography. 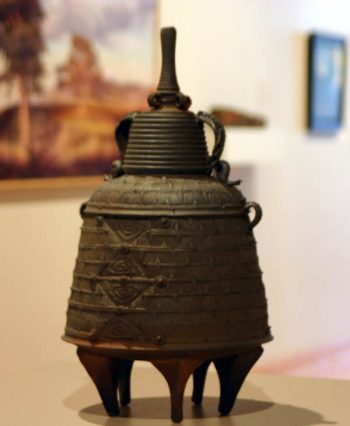 Harris, an assistant professor of art at Southern Utah University in Cedar City, has spent the past three decades researching and perfecting her craft. Much of her work is based on ancient Chinese bronze ritual vessels and emphasizes form, surface, texture and color and has an almost mystical presence.

It is difficult to distinguish if some pieces are made of clay or metal, a question best resolved by touch. And, when touched, Harris’s work can be forbidding. Some pieces are embedded with thorn-like protrusions that demand a handles-only grasp — handles often crowned with small creatures of the night, like frogs and snails. Other vessels are quite literally based on ancient ceremonial food flagons or incorporate appropriated aspects of containers used long ago to store religious items.

Harris’s pots are admired for their beauty as well as their functionality. If they have handles, Harris made sure that they fit precisely into the hand. When one of her pitchers is used for a special occasion, filled with tea or wine, its spout pours perfectly, previously hand-tested by the artist. Even when used for utilitarian purposes, Harris’s work still “maintains a ceremonial sensibility, an impression that has deliberately been cultivated,” she said. 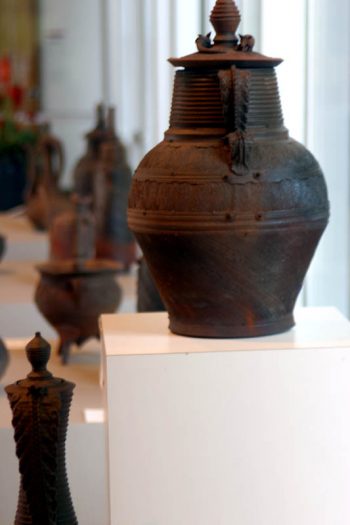 Although Harris borrows liberally from the relics of ancient cultures, she does not emphasize the authoritarian nature of their political and religious systems, or how they were reinforced through artifacts. “When the powerful have conquered the weak, they use their bounty to make ritual vessels and to cast inscriptions to record the deed” (K.C. Chang, Art, Myth, and Ritual: The Path to Political Authority in Ancient China, p. 100).

Harris, unlike conscripted artists in past centuries, has the liberty to disassociate cultural aesthetics from their political or religious contexts and expectations. As an accomplished contemporary artist, she delights in producing attractive and provocative items with simple shapes, decorative embellishments and intricate details with little, if any, political connotation.

Color is an important aspect to Harris’s pots. They range from starkly white to a light-absorbing skin that appears almost black. To obtain such an appearance, Harris said she limits her palette of mineral stains before firing. “Thin washes tend to give subtle variety to the surface. They’re not totally black, but bluish and flashed in color.”

Harris claims that this process allows the textural detail to show, which is “quite naked from a potter’s point of view — flaws and defects are right there.” Close examination reveals that her highly developed ceramic technology, craftsmanship and artistic skill have eliminated the cracking defects that traditional glazing techniques simply mask. She typically uses an iron- bearing clay, which she textures with carved and impressed designs, often populated by small animal and insect motifs. The works are then high-fired in the kiln, cooled in reduction, and subsequently treated with multiple luster firings. Additionally, Harris sometimes gives the interiors a rich, glossy lining, especially striking when rendered with a rare, gold-colored luster achieved through a “post-firing technique applied on top of, and fused to, the glaze itself,” she described. 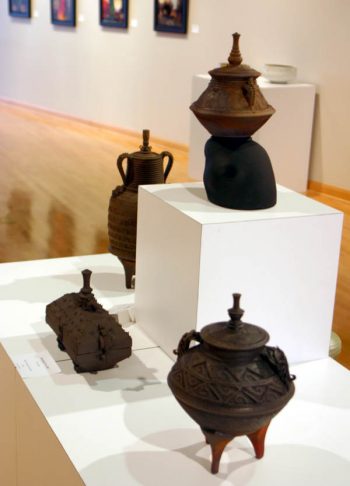 The intersecting geometric circles and triangles of Harris’s works create balance and visual appeal. Another subtlety is accidental, and for years, went unnoticed by Harris, who has a hearing disability. She was told that a deep, pleasant grinding sound is produced when the lids are slowly removed. “I now pay closer attention to the sound vibrations that my works make while being handled,” she said.

This unintentional consequence that complements Harris’s work, along with obvious design elements, suggests an affinity with Zhong bells, the two- to three-thousand-year-old bronze instruments that were discovered throughout China at the turn of the century. These clapperless instruments, when struck at just the right spots, release double-toned sounds. When opened in just the right, twisting manner, Harris’s delicate lidded pots likewise provide their own unique sounds. Although such a connection is likely unintentional, it nonetheless illustrates how intuitive affinities may connect one object, one artist, to another across disciplines and time.

Acousticians are just now coming to understand how [the Zhong bells] work,” explained John H. Lienhard, emeritus professor of mechanical engineering and cultural history at the University of Houston. “It was a remarkable technology and a remarkable art…In the best inventions, elegance masquerades as simplicity” (“The Engines of Our Ingenuity” radio series, No. 175: Ancient Chinese Bells). 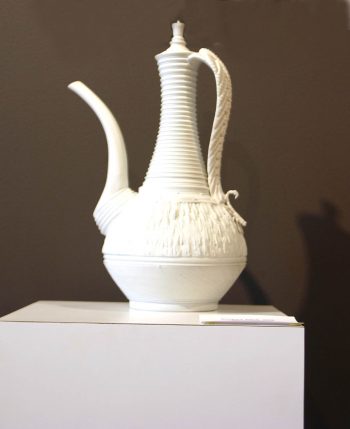 It requires some level of archaeological expertise to effectively salvage artifacts from ancient ruins and tombs. Future scientists may find it a challenge to decipher Harris’s work, provided they survive the ravages of time.

It may not be easy to place my pots,” Harris said. “I haven’t put Mickey Mouse on them. So they don’t tell you ‘Cedar City, Utah, 2004.’ But, I know where they come from in my own life. I know by what personal energy I put into them as I make them” — itself an intimate ceremonial exercise that continues to produce many strangely wonderful works that attest to the gifts and talents of our time, elegance masquerading as simplicity.