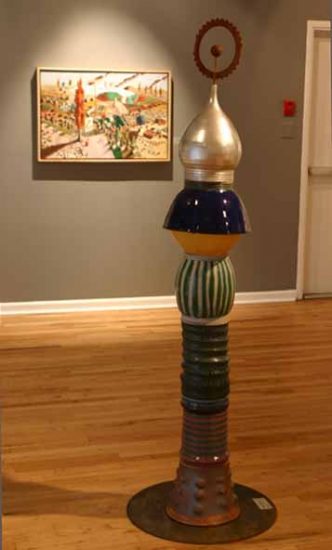 For an artist to continue growing, to stay interesting — to themselves and to their public — they must be willing to engage their work in new modes, materials and methods. Such changes often require an artist to cross a bridge. The flow, the river of work, is still theirs, but to examine it from the other shore helps to push the artist in new directions. Two well-known Salt Lake City artists, Ben Behunin and Mark England, are currently showing together in the Salt Lake Arts Council’s Finch Lane Gallery, and both have crossed a bridge of sorts in their work.

Behunin is a ceramicist who for well over a decade has devoted himself to quality craftsmanship, concentrating on imaginative designs, color and texture. He is best known for his functional works in clay, so this exhibit, filled with wall hangings, pedestal sculptures and free-standing ceramics, may come as a surprise to some. The works here are multi-media pieces, based in ceramics but also incorporating metal, painting and other elements. In simplistic terms, we would say they are “fine-art” rather than “functional art,” though in examining the work I can’t help but wonder if Behunin isn’t really calling into question some of these easy categories we give to objects. 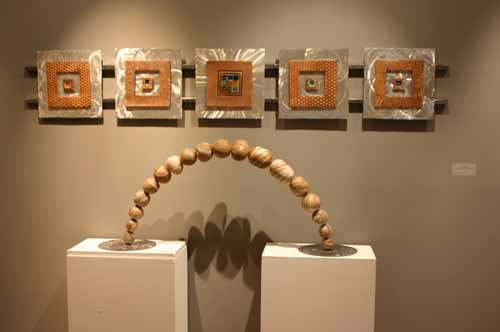 Take, for instance, the general aesthetic of the pieces in this exhibit. Many of the works are arranged in grid structures, with minimalist design, and repeating smaller components within a larger whole. In other words, they follow some general outlines for the type of work you might encounter in Artforum or in a “contemporary” art gallery. But at closer examination, the grids and panels are made up of smaller ceramic elements, marked by Behunin’s trademark designs, which seem more appropriate to the child’s funhouse than the coffee-soaked seriousness of identity politics or deconstructionist determination found in many white cubes. In the Finch Lane’s West gallery, Behunin’s five “pillars” are wonderfully whimsical creations, which are essentially stacked pots whose functionality has been transformed into “fine art” sculptures that look like minarets and make me think of a child’s book of “The Arabian Nights.” In other words, Behunin seems to mimic some basic, elementary aesthetic components of “contemporary” art, but his funny, fanciful creations — devoid of the sarcastic elements that would make them ironic — seem to want to deconstruct the deconstructors. Or at least to say, “Hey, I’m a potter but I can do this too, so get over yourselves.” 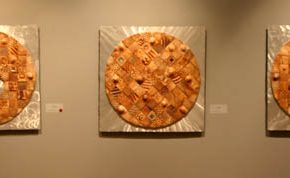 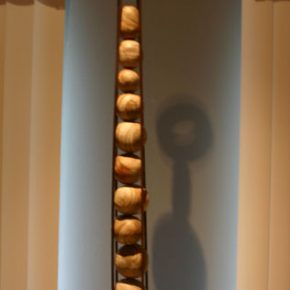 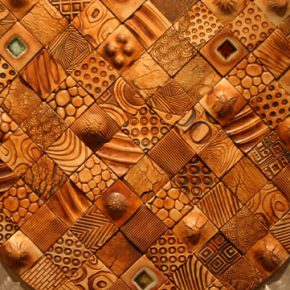 Mark England’s bridge has taken him, like young Dorothy, from a grayscale world of graphite and image transfer to an Oz-like land of full color. For many years, England worked principally in graphite, creating monochromatic works that concentrated on the process of drawing, to map out his own metaphysical world. Often his drawing resulted in works that gave a bird’s-eye view of large regional and Continental landscapes. In the Finch Lane show, England has developed his graphite series into full-bodied paintings. The color is new, but the content is the same idiosyncratic vision of North America that England has been examining for years. 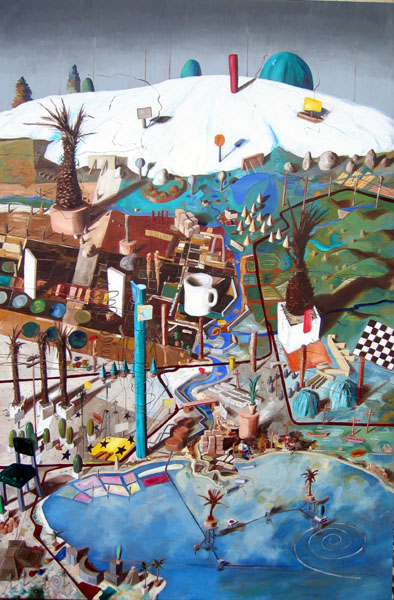 You’ll find England’s trademark landscape landmarks: the trees — poplars, evergreens, boxed cacti, palms; the street signs and wire entangled telephone polls; the crop circles. And of course, the ever-present “Spiral Jetty.” You can identify the viewpoint — “somewhere over Alberta” or “looking west from New England” — of most of England’s drawings by the ever-present image of the Great Salt Lake and Robert Smithson’s “Spiral Jetty. ” This orientation will help you to identify, let’s say, the Colorado Plateau, often seen as two or three buttes intersected by the Colorado River. But being able to identify such a viewpoint will not help anyone trying to use one of England’s paintings in conjunction with a Global Positioning Satellite.

England is stubbornly idiosyncratic in his vision(s) of North America, oftentimes condensing or expanding sections of the landscape, giving emphasis to what is important for his personal vision. For instance, in “North America,” we can easily identify the San Francisco Bay area, with its two bridges, one red and one umber, but the larger Los Angeles is hard to pinpoint. Phoenix looms large with a gaggle of potted cacti. Subtle crosses litter some of the states along the Mason Dixon line. The large poplar tree that stands above the Colorado Plateau will be incomprehensible to most people outside the state, but easily recognizable as a symbol of central Utah to those who have traveled the area. 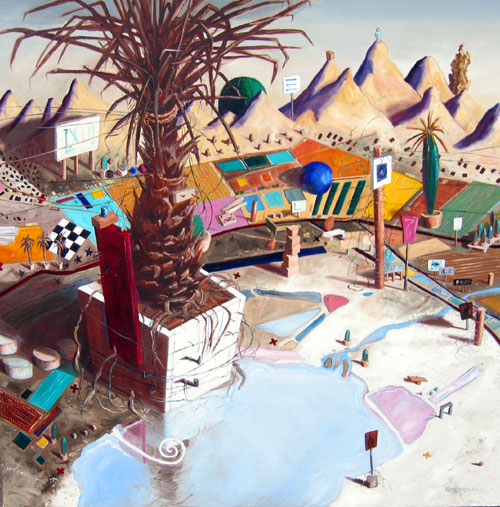 One work in this exhibit, “Holy Land,” stands out as being non-North American. One can easily identify the Red Sea and the Pyramids in the distance. We are somewhere over Jordan, looking down on a landscape with two lakes connected by a river. A long wall sections off a third of the drawing. But, with the similarity of the Holy Land landscape to that of Utah (two lakes, one saline, connected by a Jordan river), I can’t help but think there isn’t some irony going on here. In my Utah misreading, then, the wall would serve to enclose (to keep out or keep in?) Utah County, where England grew up and lived before moving to Salt Lake City.

Of course, that might just be my own misreading of England’s purposeful (mis)readings of the North American landscape, but that is part of the fun of England’s paintings, and the drawings on which they are based. I am still foremost a fan of England’s graphite work — the immediacy of the artist’s hand mapping out his existence seems central to the work — but England’s transformation to color in this exhibition is very pleasing. The color remains subordinate to the overall theme of the pictures, but is used to good effect. For instance, when you peer over North America toward Central and South America, seeing Antarctica looming in the distance, the brilliant white and blue of the frozen landscape does provide a certain “retinal shudder” – it may not give you any content that isn’t there in the drawings, but it is nice to look at. 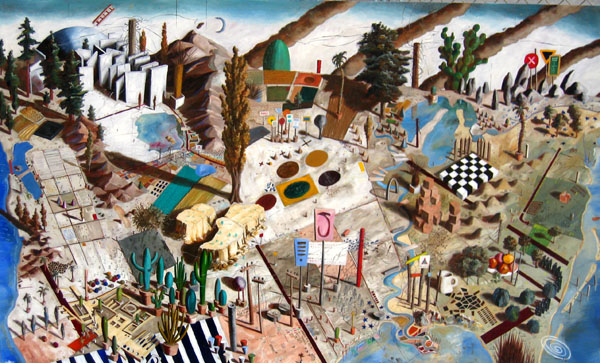 Works by Ben Behunin and Mark England will be on display at the Finch Lane Gallery through June 2. On display downstairs in the Park Gallery are the photographs of Dennis Mecham. His photographs of the Guggenheim Museum in Bilbao use the sweeps, edges and sexy lines of the Museum Guggenheim to create abstracted images of light and form.