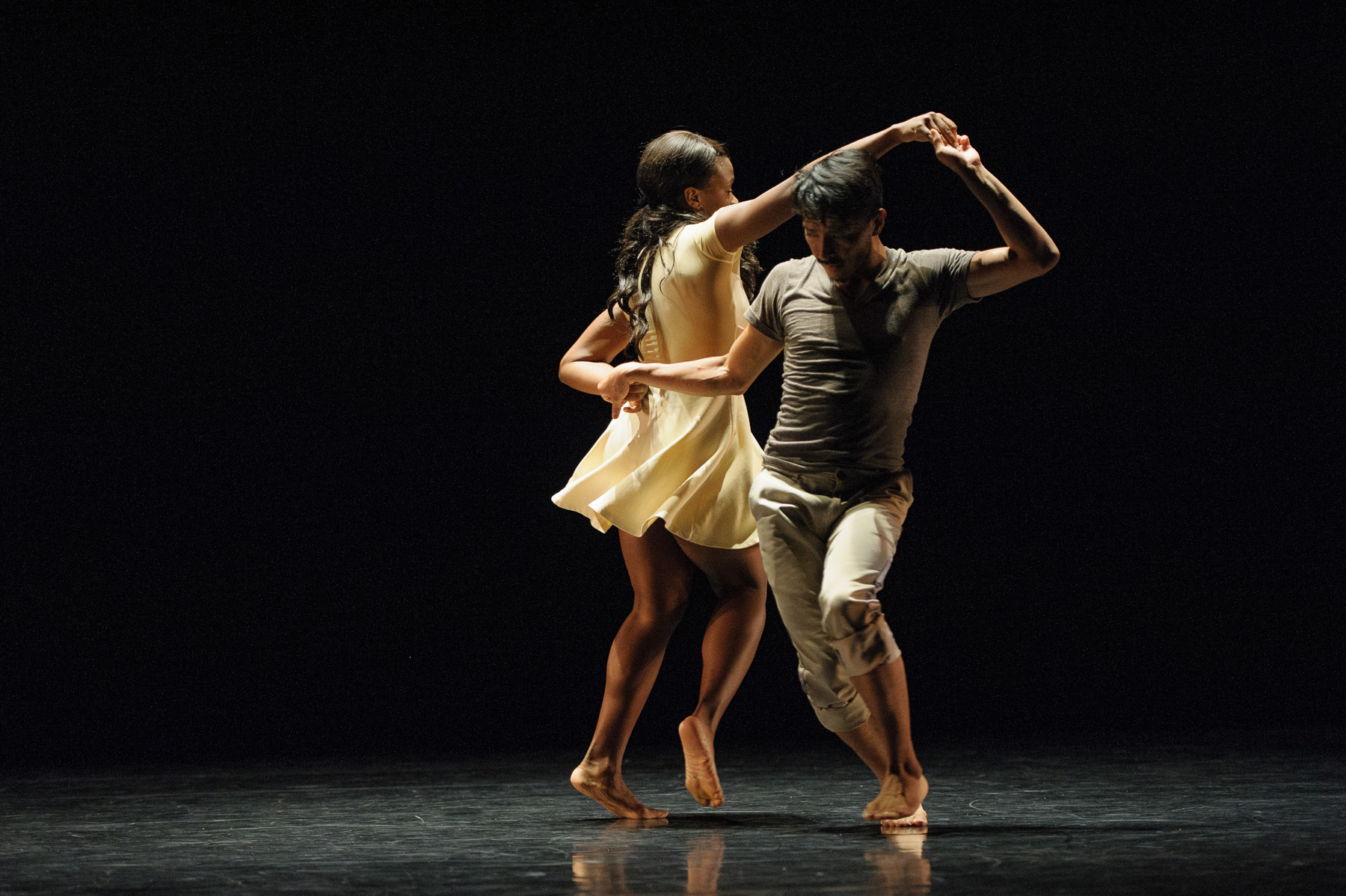 Duets abound in Repertory Dance Theatre’s fall season, Portal, in which four choreographers’ voices configure and reconfigure a company in transition (RDT has four new dancers: Jaclyn Brown, Lauren Curley, Dan Higgins and Lacie Scott). The evening is quite a curatorial feat, uniting four diverse pieces that have just enough in common; three from the company’s archive and one new commission. The thread is the idea of the duet. These are dances in which the performers are constantly pairing off, demonstrating how changeable each can be just by standing next to a new partner.

The first half of the evening seems to take place in shadows. In Zvi Gotheiner’s “Duets to Brazilian-Indian Music” and in Steve Koester’s “Fever Sleep” there’s often barely enough light to see what’s happening. In Gotheiner’s “Duets,” the movement is also shrouded by the sensuous drama of the first three sections’ vocals (in all three, women dance with men). Somewhere during the fourth duet (Tyler Orcutt and Efren Corado) a fog seems to lift, and by the time Ursula Perry and Jaclyn Brown pair off, there’s rich clearness. Luminous lines propel themselves through space — gestures that will be fractured by dementia, confusion and plain silliness in Koester’s Where’s-Waldo-costumed nervous breakdown for four.

After intermission, our eyes don’t have to work quite so hard. For Viola Farber’s 1970 “Passengers,” the wings are flown out, the lighting is more straightforward and the entire company games on equal footing. “Passengers” is a highly structured improvisation, using chance procedures, name-calling and other Cage-ian devices. It takes a minute, but eventually the company is engaged in a concentrated activity that is an odd mixture of free play and deconstructed dance formalism. It’s a pleasure to watch, even if, at times, it feels like a lecture-demonstration. 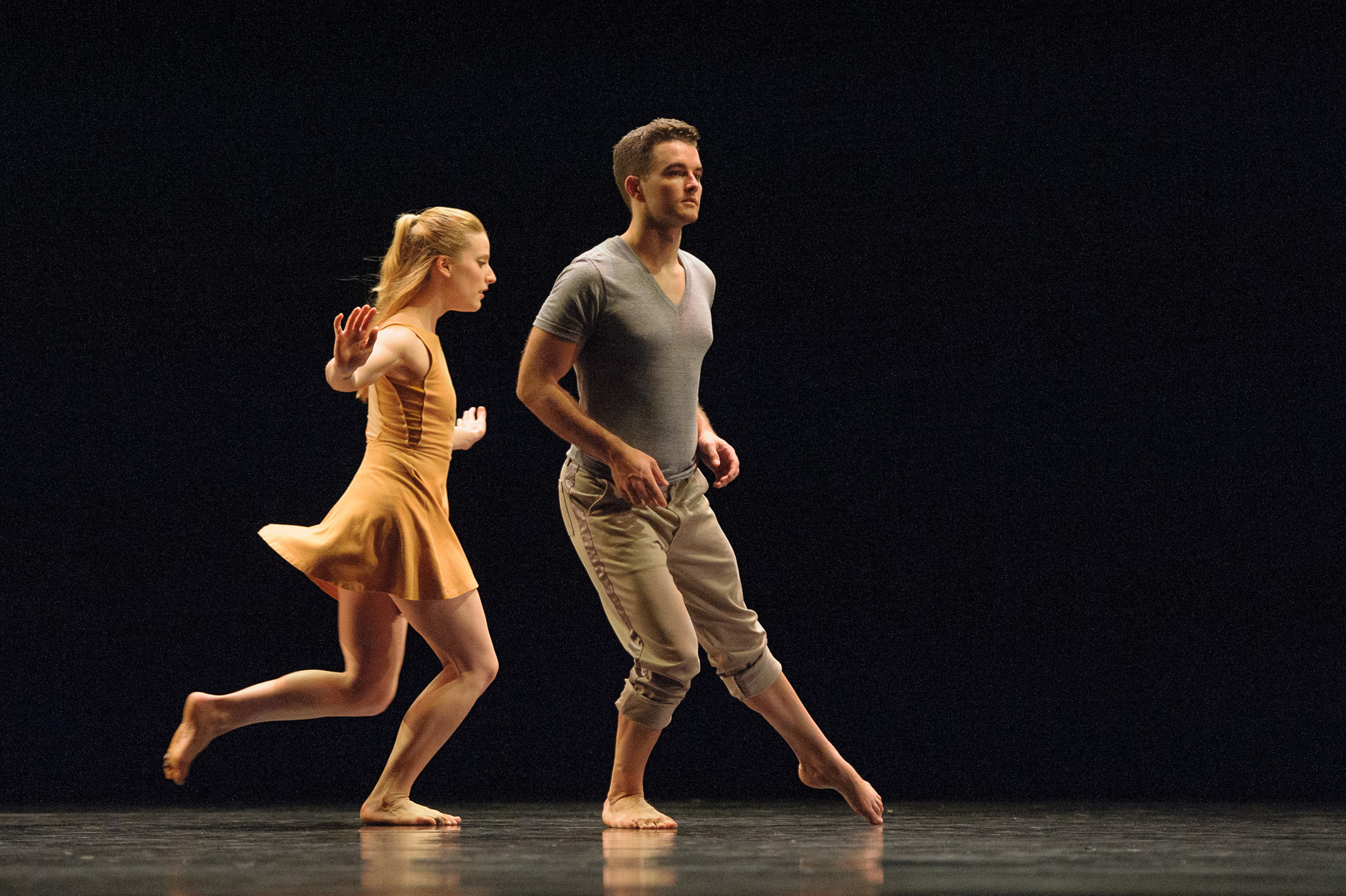 Finally, we arrive at the evening’s main attraction, “By the Snake,” made by Noa Zuk with original music by spouse Ohad Fishof. There is one indelible picture in this work: three pairs of men and women — the entire cast — stand facing us, hand in hand. They seem to wait for a change in the room. The center pair comes forward and all pause together, breathe, and pause again, before descending into wildness.

I wonder if how I recall this recurring image has more to do with the power of this particular dance’s structure or with the totality of everything leading up to Zuk’s piece. I’ve seen so many couplings already this evening, both hetero-normative and otherwise, that I’m a little shocked to be so moved by an image that seems so predictable, so banal, so overdone. RDT has accomplished something here: they’ve made me see a new possibility for how men and women might be together on stage.

Perhaps it is Zuk’s choreography after all. These couples move with a sense of abandon that’s wonderfully at odds with the redolent forms they’re constructing and destroying together. As they swing recklessly, lofting off of each other’s cliffs and valleys, they eschew either male dominance or politically-correct pseudo-Contact Improvisation— this isn’t a dance where the number of male versus female lifts could ever be counted. And yes, I think these are largely heterosexual couplings — but only in the most fleeting, provisional and at times ironic sense invoked by the explosion of a certain kind of social dance idiom.

There are heady, heightened moments like these, in which Fishof’s score lends understated, goofy humor to a party vibe. The three couples act out a double’s version of one of the frenetic trios from Koester’s work. There are also calmer scenes, where the cold, metallic noises that create the dance’s skeleton slowly take on the comforting appeal of one’s own refrigerator’s unique hum. Things seem not to happen more than once, but there is a constant sense of cycling. The work really is as Zuk describes it, “a fabricat[ed] folk dance…with different forms and values”. When “By the Snake” ends, right after its second great group conglomeration, it feels both perfect and all too soon. 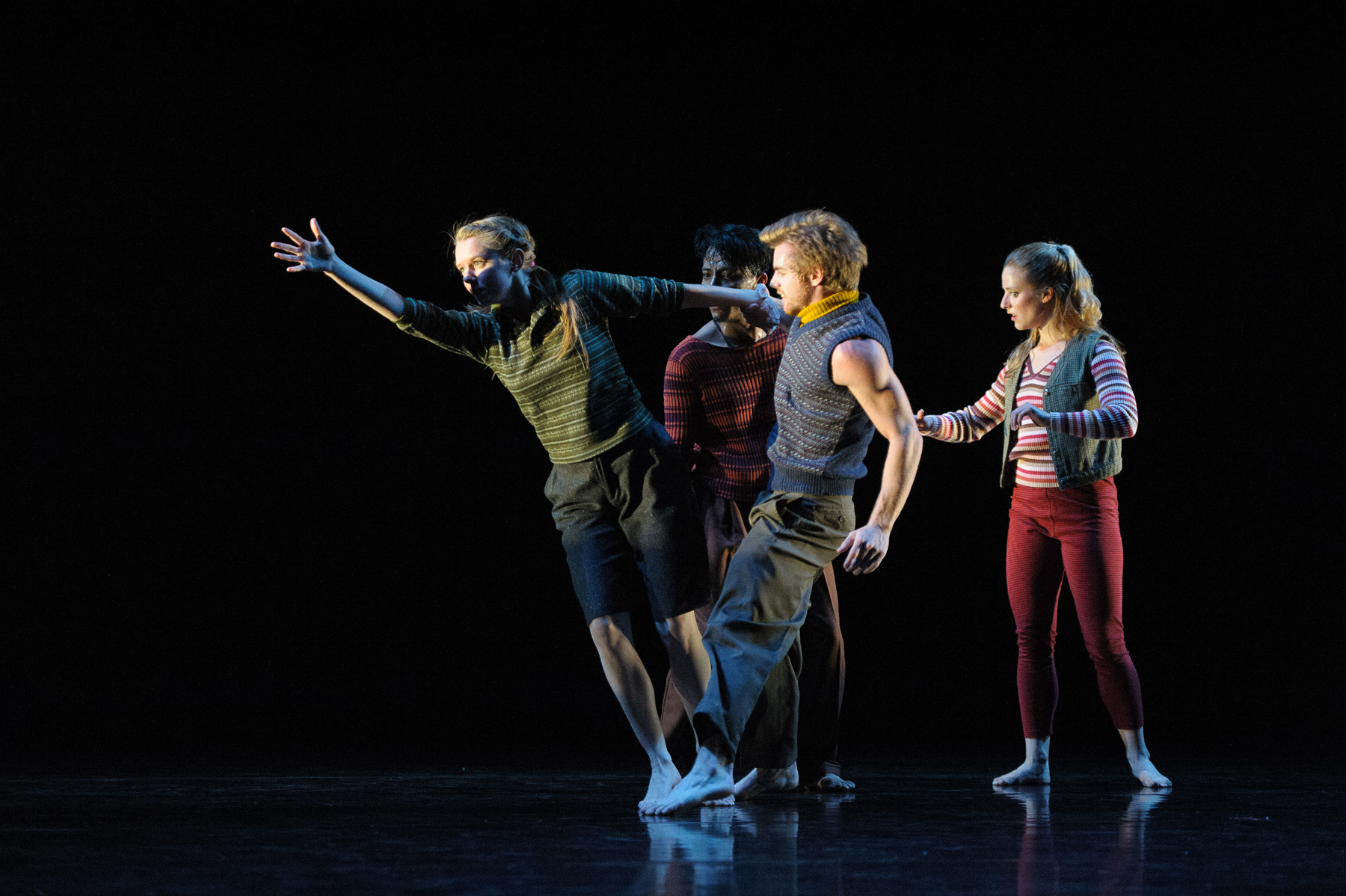 Tagged as: by Samuel Hanson, RDT