Crafting Change Through a Lens: Unfolding Truth Features 13 Documentary Photographers from Around the World 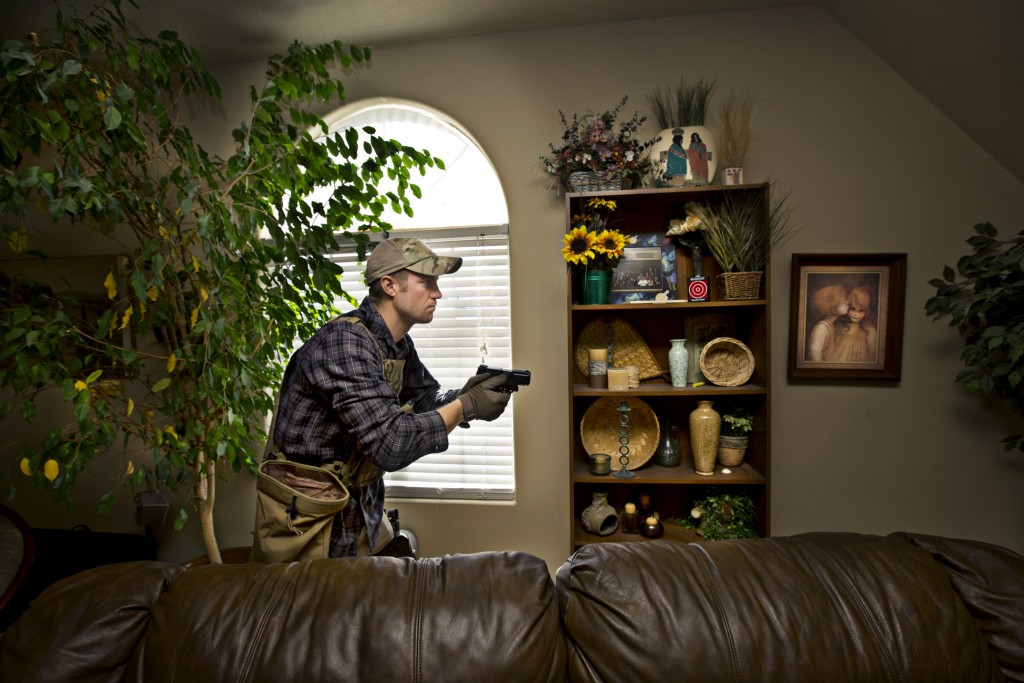 Ace Spade practices drawing his hand gun in the living room of a members home during a training exercise.

The rare power of documentary photography is its ability to capture a moment and give the viewer access to a raw scene that evokes a disconcerting sense of intimacy with an unfamiliar, sometimes uncomfortable subject. It’s the visual equivalent of reading a journal filled with personal stories, including narratives that are usually kept private. This closeness can bring a shift toward understanding a topic far outside one’s life experience, and whether the newfound awareness is subtle or profound, therein lies the key: change.

In May 2012, Lynn Hoffman-Brouse founded TheDocumentaryProjectFund (TheDPF) to provide photographers funding so they can pursue their craft by telling the story of their community. As she told 15 Bytes in November 2012, Hoffman-Brouse sought photographers looking “to use art in a way to hopefully create change.”

Four years later, as TheDPF prepares to host its first-ever group exhibition of grant winners, Unfolding Truth: Photographs by TheDocumentaryProjectFund Awardees 2012-2015, her vision remains the same. Each of the 13 projects is a unique opportunity for change because the pictures document a part of the community where the photographer lives, ranging from Utah and other U.S. states to countries around the world including Russia, Austria, Switzerland, Romania, and Myanmar. The diverse range of subjects includes immigration, gender identity, pollution of resources, and more. The images share a common ground in their invitation to the viewer: risk the intimacy of exploring the photograph. The exhibit is an opportunity to unfold layers of an unfamiliar or even uncomfortable story, where the possibility of understanding exists.

TheDocumentaryProjectFund board member and co-curator of Unfolding Truth, Christine Baczek, says, “In today’s world there is a problem with visual literacy. People are used to seeing hundreds if not thousands of images daily and our brains can make sense of them within a nanosecond. However, really understanding the information is different. This exhibition of photographs by some of today’s best documentary photographers presents very challenging topics through the lenses of exceptional visual storytellers. We want the viewer to ‘unfold’ the details within the images to find meaning, which can be a particular challenge with documentary photography because the subjects can be so difficult to witness.”

For example, Utah-based photographer Kim Raff’s series, Land of the Free, offers a photograph of what appears to be a living room. The room itself is inviting with a soft, brown sofa where one could sit for a casual conversation; a bookshelf brimming with curious knickknacks a person might casually pick up to examine; green trees and yellow sunflowers give the room a cheerful ambiance where it would be easy to relax for an afternoon. In an unsettling juxtaposition, a man stands in the space holding a gun at the ready. It’s as if he expects an intruder at any moment, and the military garb conveys an air of authority that suggests he’s prepared to be on the winning end of any fight.

The people in Land of the Free are members of the United Sentinel Militia. In the media, militias are portrayed as two-dimensional radicals who are not only separate from the community, but also a threat to it. Raff offers a more complex, unbiased glimpse into the homes and lives of the people involved in the movement, and invites viewers into a disconcerting space where stereotypes begin to dissolve, and previously unfathomable motives are brought home. The thought of a home being under attack makes a person uneasy. The majority of people would go to great lengths to protect their house and all it represents: family, love, safety, community, hard-earned ownership of property, and a familiar place that serves as a sanctuary from the hectic outside world. For as much as the man appears threatening, there is a flickering moment, perhaps longer, where the viewer steps hesitantly into the living room and feels a connection with this off-putting stranger because we all share the overwhelming need to protect and preserve what we love.

Other works in the exhibit are equally provocative. Preston Gannaway’s Soccer on the Street features Bella, a woman seen on the streets of San Francisco and in uniform at soccer matches. In one photograph, where she stands in front of a fence and appears to be taking a break from a match, she looks tired, her eyes half-closed. The fatigue could be from a taxing game, but it’s equally plausible she’s weary from the unfair challenges she faces as a transgender woman also struggling with homelessness.

Jenn Ackerman’s Little Somalia depicts women who sought refuge by immigrating to the United States. As they go about their daily lives in Riverside Plaza, Minnesota – one of the largest Somali communities in the United States – there is a constant tension between assimilating to a new environment while preserving their cultural heritage.

The human experience is multifaceted by nature, but it’s easy to forget this as we move through the world and react to it through a narrow lens: crossing to the other side of the street because a man in army fatigues might be a radical, assuming a young woman on a soccer field is “just” playing a game, or staring at someone who stands out at the grocery store because their clothing is distinctly foreign; these dismissals strip away our ability to perceive people and situations beyond problematic generalizations. Documentary photography like this, on the other hand, invites the viewer into a space where it’s possible to unfold the layers that separate us and recognize we may share common ground—with that armed individual we perceive as a threat, the woman who appears to be playing a game but is fighting for a much greater goal, or the immigrants who are so fiercely debated in mainstream media but may simply want the freedom to quietly live their lives.

“People tend to look at big issues and believe everything is black and white,” says Hoffman-Brouse. “But through good art we can create those shades of gray and hopefully encourage people to challenge their preconceived notions, which clears a path to change.” 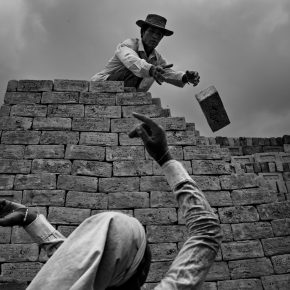 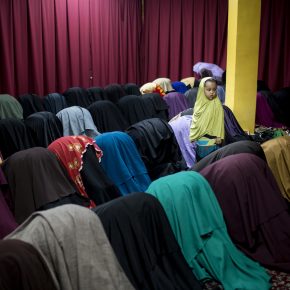 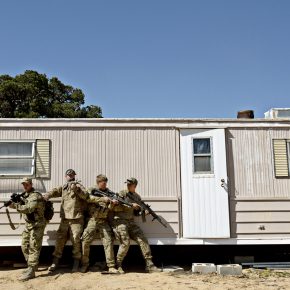 Members of the United Sentinel Militia take part in a room or building clearing exercise during a field training event in Utah. “ThereÕs a lot of militia groups, we call them bug out groups. They’re always prepared for this whole “crap hits the fan” situation. Their whole plan is that their gonna run out to the desert and hide. And thatÕs not us. We want to help people cause I value my neighbor down the street and I hope they value me too so IÕd want to be there to help them,” says Torrey Weber, commander of the USM. 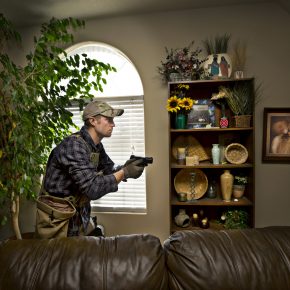 Ace Spade practices drawing his hand gun in the living room of a members home during a training exercise. “Like a lot of people I want to have a plan. A want to have a group of people I can rely on not only for protection but also to protect. If something were to happen, civil unrest or a natural disaster and our government was not able to protect us, I donÕt want to be one of those helpless people thatÕs just gonna fall by the wayside to irrelevance or insignificance. I want to actually do something in my community to show that IÕm willing to do what it takes. IÕm a patriot. IÕm willing to bleed on that flag so those strips stay red,” says James Wood. 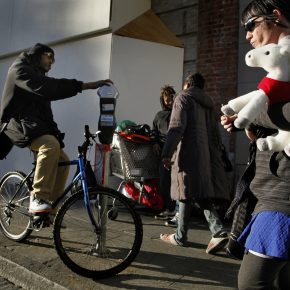 Isabella walks through the Tenderloin neighborhood in San Francisco, Calif., on Thursday, November 5, 2015 carrying a stuffed horse that was given to her by a social service worker at Larkin Street. (Photo by Preston Gannaway © 2015) 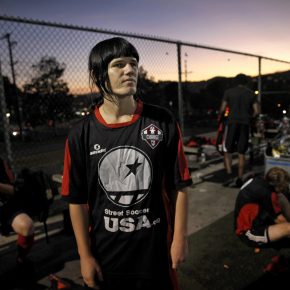 Isabella waits for a game to start in San Francisco, Calif., on Thursday, October 29, 2015. One day before she transitioned she was feeling bad about the way she looked. A friend saw her crying and called her “Bella,” explaining it meant, and she was, beautiful. It stuck. “Every now and then, people catch me on the bus saying, ‘Is beautiful.’ And they’re like, ‘What’s beautiful?’ And I say, ‘I am.'” (Photo by Preston Gannaway © 2015) 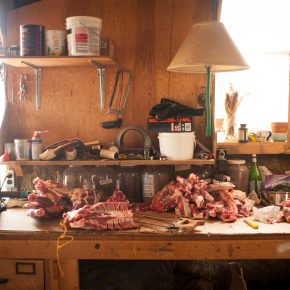 Emily’s meat as she prepared it for the winter. 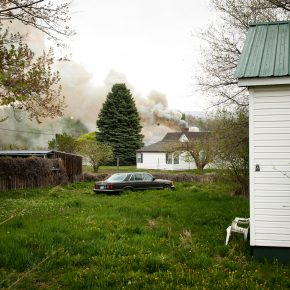 A barn fire at Stahl Orchards in Paonia.

“Unfolding Truth: Photographs by TheDocumentaryProjectFund Awardees 2012-2015” will be on view March 8-April 11 in the George S. & Dolores Doré Eccles Gallery at the Salt Lake Community College South Campus, 1575 S. State St. An opening reception is March 8 from 6-8:30 p.m., and a panel discussion with photographers Kim Raff, Preston Gannaway, and Theo Strommer will start at 7p.m. in the gallery.