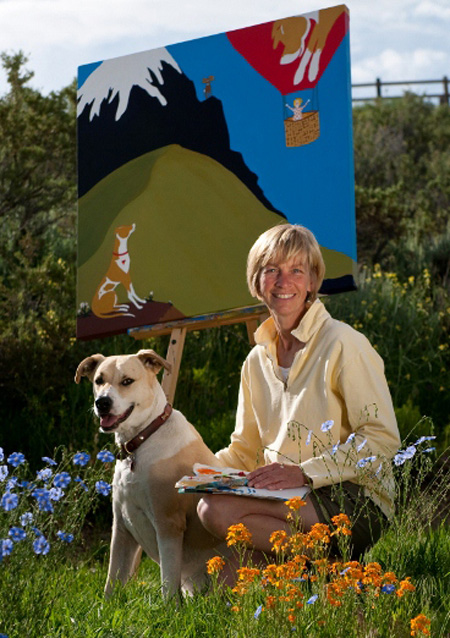 What do you get when you combine an author, professional photographer, teacher, philanthropist, flight attendant, and artist? Corinne Humphrey, the award-winning author and illustrator of two children’s books, with a third in the works.

Humphrey is from a small town in Virginia, where she dreamed of being a marine biologist because she loved Jacque Cousteau and his little submarine and dreamed of wearing one of his wet suits. Since she admits to being “hopeless” at science, her childhood dream didn’t pan out. After taking technical drawing and architectural drafting in high school, her ambition turned to being an architect, but she finally ended up majoring in sociology in college. She now lives in Park City, where when she’s not working out of the Salt Lake International Airport as a flight attendant, she keeps herself busy in a variety of projects, many of them artistic.

Humphrey has a way of incorporating and using all her life experiences in her projects. She claims that the path to becoming an artist and illustrator had a lot to do with serendipity, but there’s a lot of intelligence, creativity, and energy in the mix. 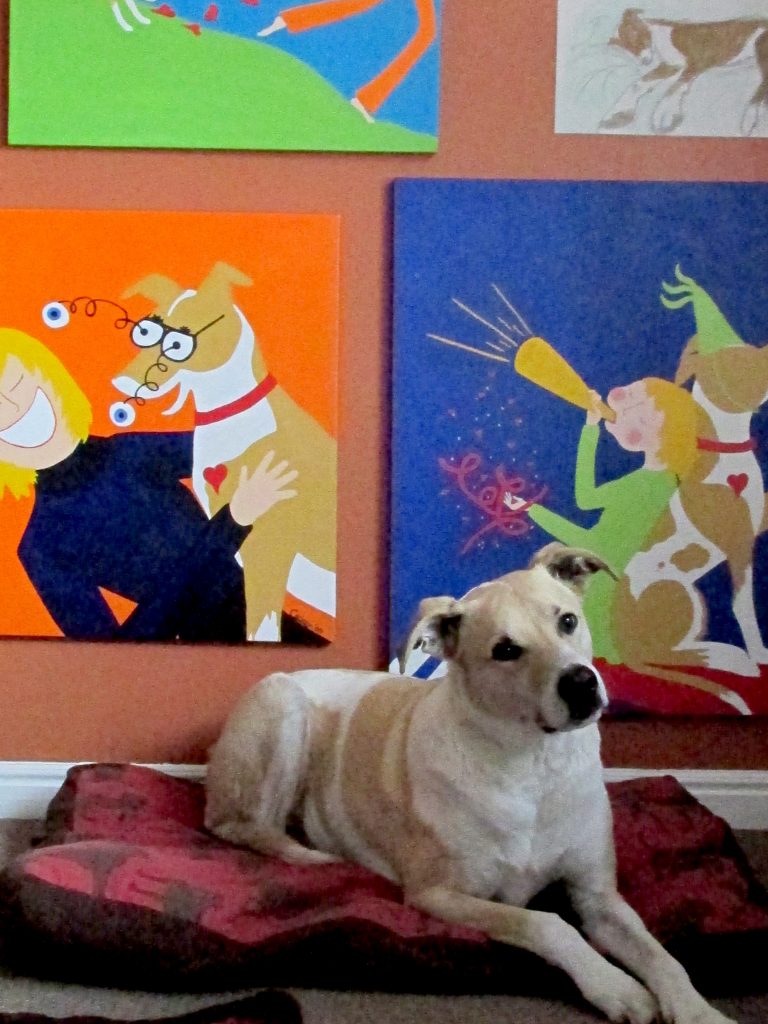 The subject of her two books, Rudy the dog, actually exists and lives with Humphrey. When she adopted him from Friends of Animals in Park City, she knew he was a ‘problem child’ — ”he was great at home but we needed to work on some things outdoors,” she says – but he also became the inspiration for her book. She says he comes out from his bed in her studio to nudge her when she’s ‘being lazy,’ goes back to the studio and waits, comes back, and nudges again until she finally gets to work. 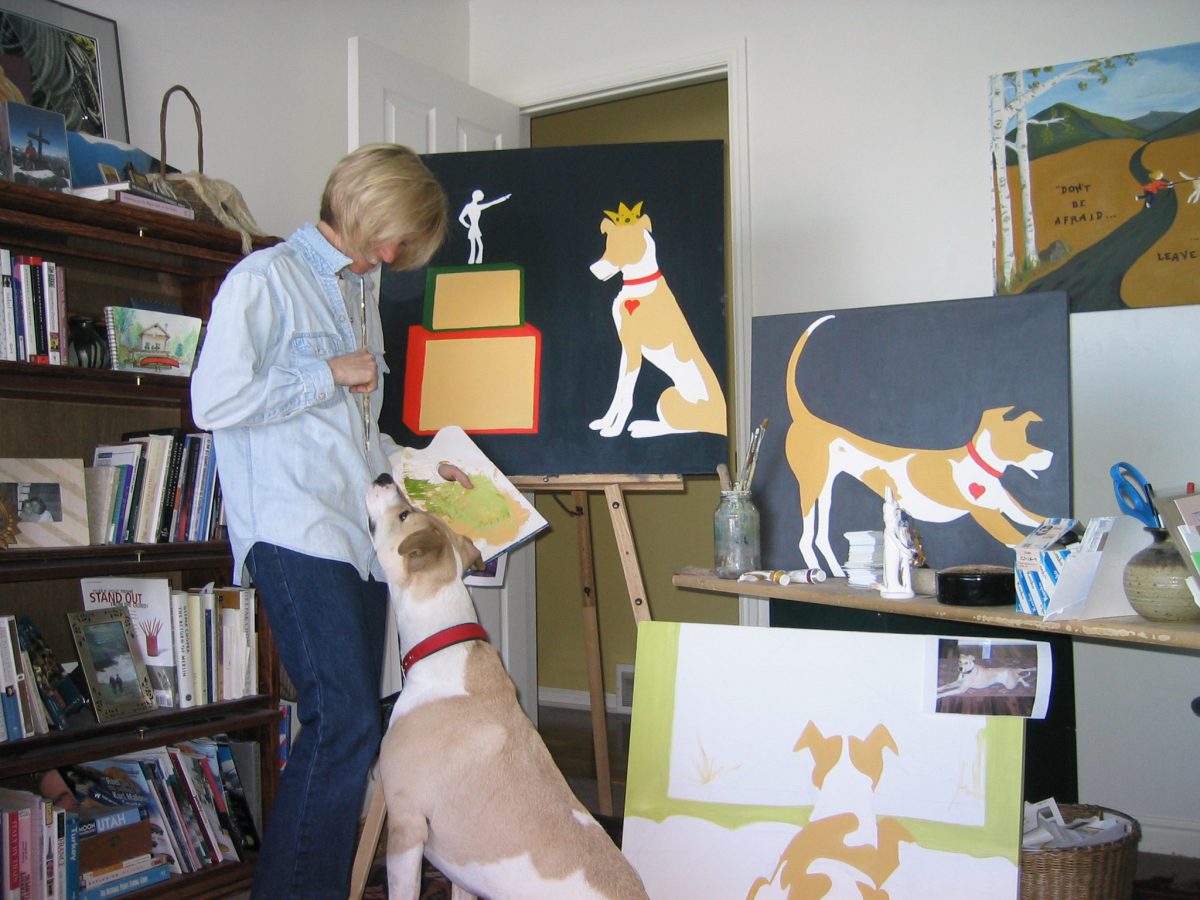 In childhood Humphrey took a few art classes, starting with drawing Bambi in a magazine contest, but she says she turned her back on it. “I think some parents steer their kids away from pursuing an art career for fear that they won’t be able to make a living.” Her interest renewed as an adult and, taking advantage of her perks as a flight attendant, she took two art classes in southern France.

The Rudy books began during a sabbatical from the airline. She enrolled in an adult education painting class in Park City and had just adopted Rudy. His markings were so striking that she painted him into the landscape she was working on for the class. She was given a lot of encouragement about that piece, and upon meeting Canadian artist Sheila Norgate, was told, “Sometimes you just have to let the wild woman into the studio.” Humphrey went for it, did more paintings, got in a show at the Kimball Art Center Gala auction, and sold two pieces. 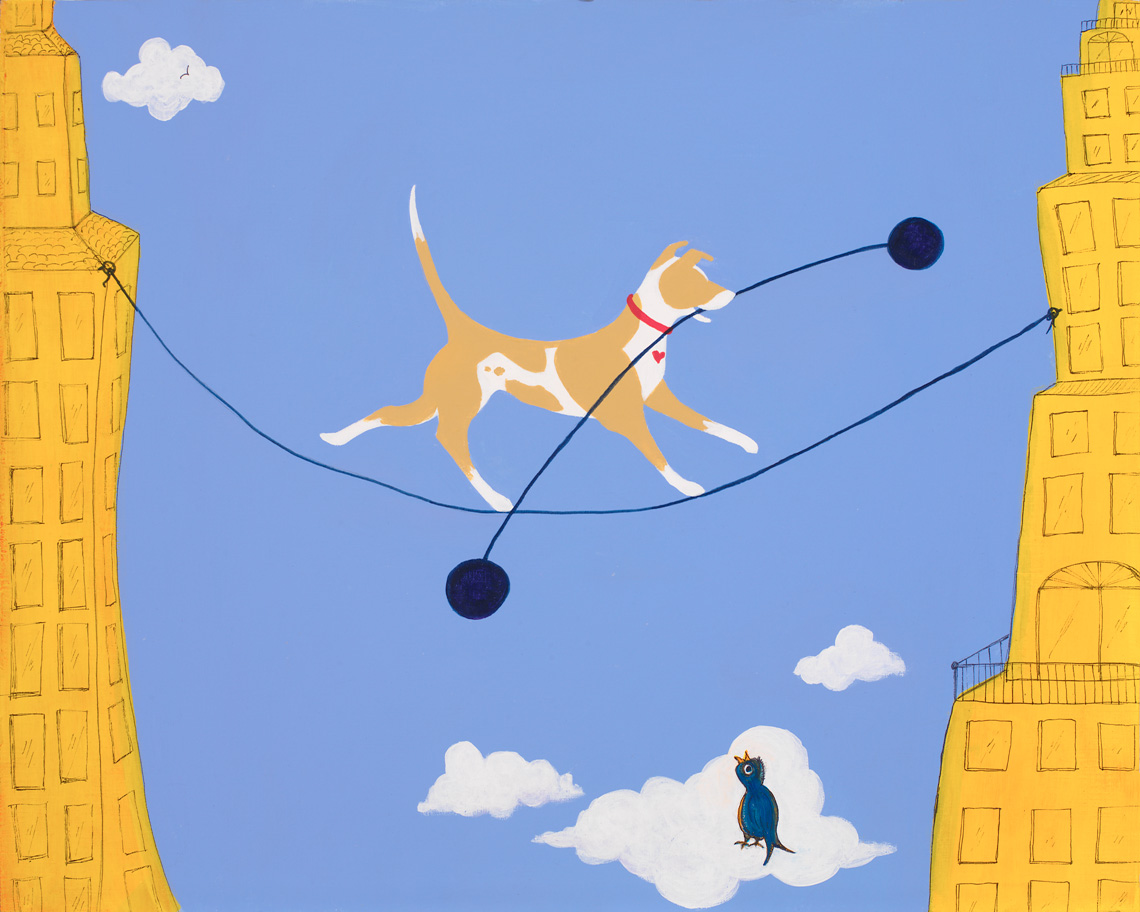 Her busy mind kept swirling, leading her to the idea of making a children’s motivational book incorporating the paintings of Rudy. “The Tao of Rudy” was published independently with help from her parents and a private foundation. Humphrey says she has a tendency to jump into the middle of projects — for example, she took hunter/jumper classes before taking basic horse-back riding lessons — but in this case, she attended a BYU conference for writers and illustrators of children’s books, learning and seeking advice. “The Tao of Rudy, Canine Wisdom for the Current Age,” was published in 2007, and won a bronze medal for outstanding book design, and an honorable mention for book of the year from Foreword Reviews Magazine’s Book of the Year awards.

While still on sabbatical from the airline Humphrey also worked on her second book “Shoot for the Moon: Lessons on Life from a Dog Named Rudy” which won the Gelett Burgess gold medal in the inspirational/motivational category, in a tie with author and Olympics star Kristi Yamaguchi. When Humphrey had to go to New York to receive the award, she planned on flying in in the morning, getting the award, meeting with an editor from Macmillan Publishers, and returning to Utah in the evening (another airline perk). She quickly changed her mind when the editor asked if they could get together again the next day so that Humphrey could meet with other Macmillan staff members. It looked like they were going to take on her book. 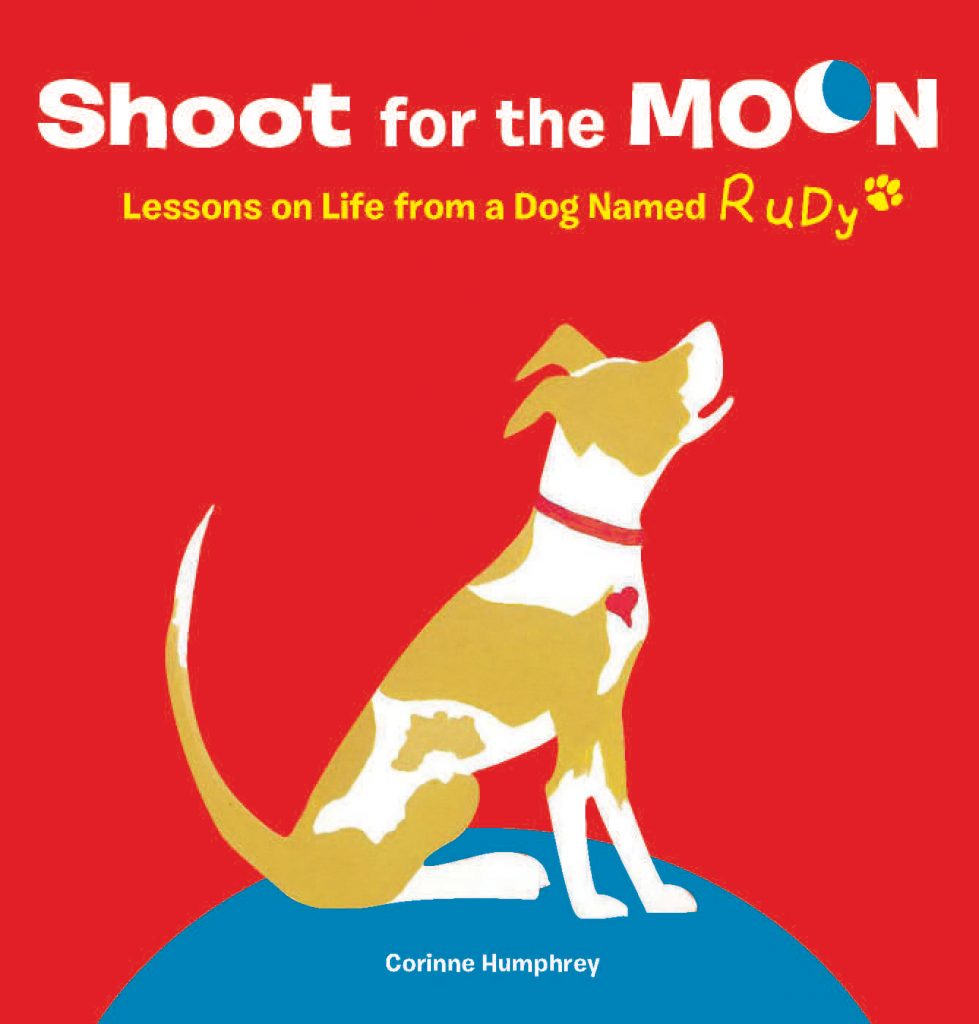 Back in Utah, a man who saw the book insisted she send it to his friend, director of sales and marketing at Chronicle Publishers. Simultaneously, the editor from Macmillan Publishers was attending a Chicago book conference and there met a senior officer from Chronicle. She pitched Humphrey’s work, feeling Chronicle would be a better fit and could take her books much further. Serendipity. Chronicle took her on with a five-year contract.

The format for these first two books is based on motivational messages like “Don’t be afraid to leave the path,” “Find a balance,” (image) or “Take the Leap.” The stories are accompanied by paintings of Rudy acting out the messages. “The messages are pretty universal and many of them apply to me,” says Humphrey. Rudy has helped her put to use these messages in the making of their books. 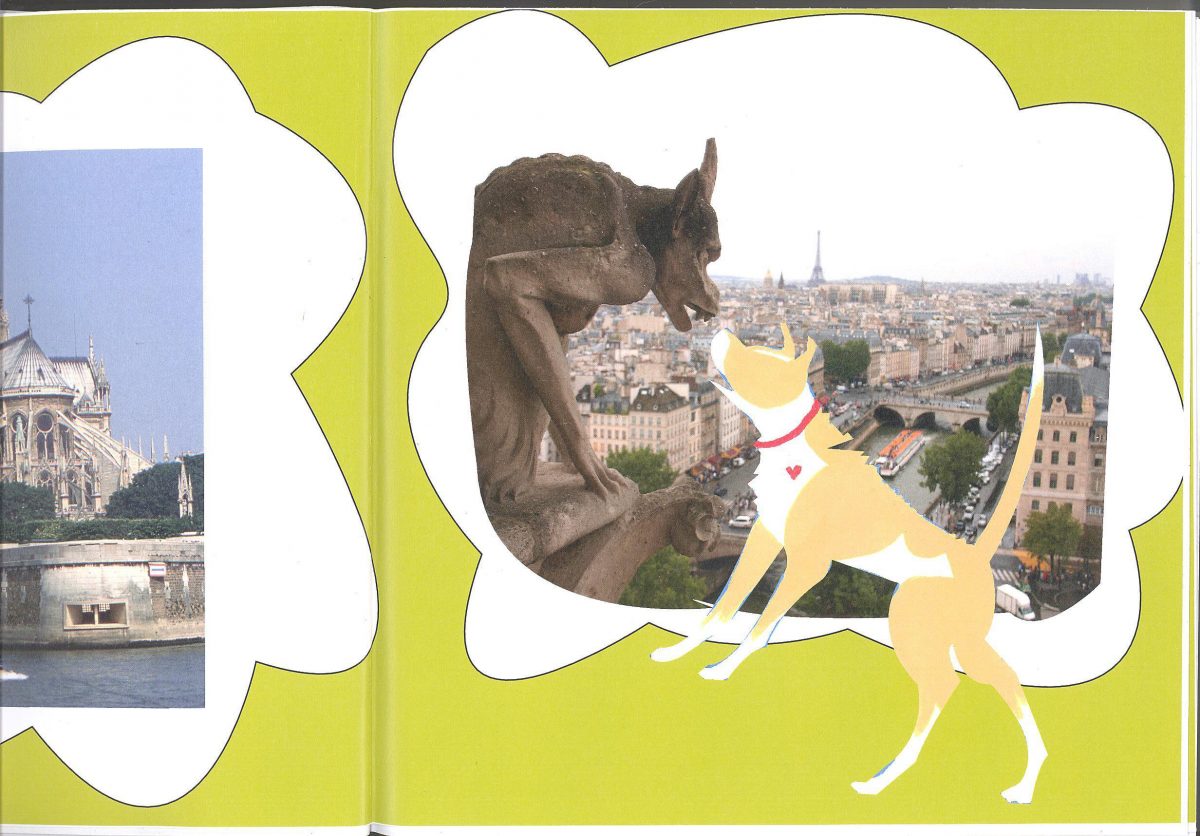 Her third book, with a working title of “Roaming with Rudy: EmBARK on a Big Adventure,” shifts direction a bit, and she hopes it will become the first in a series of books designed as kind of a travel guide for a slightly older audience. She’d like to be communicating with third-graders, teaching and encouraging interest in the geography of the world. Here she incorporates her experience as a professional photographer for Lonely Planet while working for the airline. Paintings of herself getting ready to go work a flight to Paris with Rudy watching from his position in her suitcase (he really does this when he catches on that Humphrey is leaving again) accompany her description of the sights she’ll see. Rudy falls asleep and dreams that he is there. Printing her photographs onto watercolor paper, Humphrey paints Rudy into those scenes barking at gargoyles,|7| or hanging out at the bookstalls by the Seine. Along with the images, Humphrey includes fun facts about the places, and a map with numbered paw prints indicates places of interest.

“Juggling everything is a challenge. Marketing yourself takes away from the creation,” she says. Her life is crammed with flight attendant work, writing, illustrating, painting, doing school visits in Park City, giving yearly talks to the 3rd grade group at an elementary school, |7| teaching at ArtsKids. Humphrey hopes, ultimately, to be able to make a living through her art. She’d like to be with a gallery and to have an agent. With a partial scholarship provided by the airline she is now in an Arts and Illustration program at UVU. Never lacking for ideas, she has a running list of future paintings she might do, which she keeps in a big orange binder that she calls BOB, for obvious reasons. She has two more books in mind aside from the travel series. As an author, professional photographer, teacher, philanthropist, flight attendant, and artist Humphrey is a busy lady, but she’s not showing any signs of slowing down. 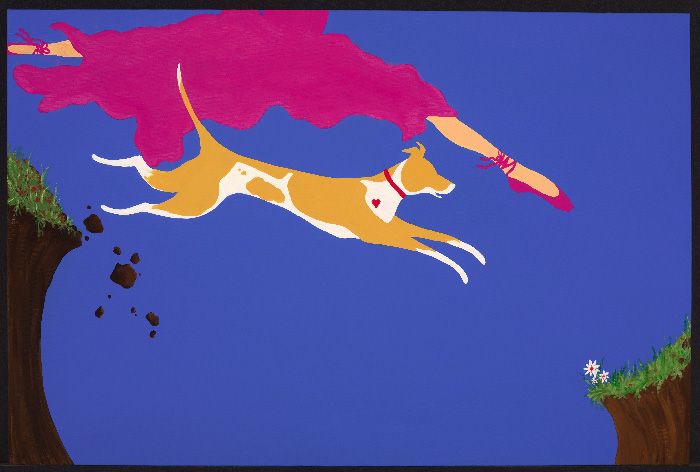 In March 2013 Corinne Humphrey will be the featured artist at Atelier AFA (formerly Borge Anderson), now a member of the Salt Lake Gallery Stroll. Her two published books, which make for great gift ideas by a local artist, are available locally at The King’s English and online

. She (and Rudy) dontate 10% of the proceeds to Friends of Animals, along with one painting a year to the Kimball Art Center Gala. Learn more at corinnehumphrey.com.