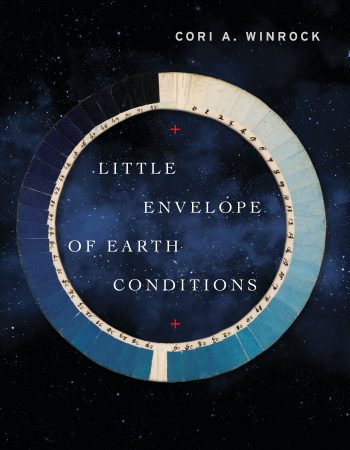 “Nothing gets to stay what it is for very long,” says Cori A. Winrock, describing the transience of the world that surrounds us, just one of the many themes addressed in her new book of lyrical poetry Little Envelope of Earth Conditions. “Heirlooms, spacesuits, an ambulance; objects are constantly transforming.”

Winrock, a poet living and writing in Salt Lake City, is a Ph.D. candidate in the Creative Writing and Literature program at the University of Utah. “A great thing about being a writer is you get to play,” she says. “Play with language, experience, imagery.” That play has been well-rewarded: She received widespread recognition and multiple awards for her first collection of poetry, This Little Coalition of Bones, published in 2014. Little Envelope of Earth Conditions is her second book.

When she relocated to Utah five years ago from Rochester, New York, Winrock compared her experience to what an astronaut might feel while floating in space. “I recall speaking with my sister on the phone and telling her that it felt like I was living on the moon.” The clever title of her newest work is related to that feeling and carries wonderful significance: “In Little Envelope of Earth Conditions there is a focus on spacesuits in the Apollo era and the women employed to manufacture and create the material within the spacesuits that help keep the astronauts alive,” she says. “The spacesuit is a little envelope of earth conditions that sustains the astronauts while they are away from Earth.” In “+ A Real Spacesuit Is a Little Envelope of Earth Conditions +” she writes:

When our mothers were astronauts, we sewed space

so we could buy better thread. We sewed day into night

for the moonwalkers, gathering bolts of

constellation in our arms. After every performance

compliments. They loved us.

Little Envelope of Earth Conditions is composed of six sections of lyrical poetry. It is based in imagery, not necessarily a linear narrative. Throughout the book, the metaphor of survival in space becomes increasingly profound. “Feeling lost in space,” is a phrase that Winrock uses to explore feelings of grief that come with tragic loss. She has experienced profound grief herself, particularly after losing a baby just prior to her move to Utah. In “The griever awaits” she writes:

The griever awaits in a room with a horse-

drawn ambulance idling in her chest —

her dowry an empire of snowed-over

backstreets. No sidewalks salted; no plows

from above not below — it’s the moon drawing

a tune from a bow’s warp & halving, the grief’s

Winrock says some parts of the book came together very easily and quickly; other aspects were more difficult. “It is really tough to write about grief. Grieving is internal; mourning is the external process.” Walks in the Salt Lake City Cemetery were very helpful. “It’s a place of grief, but also very peaceful.”

Winrock insists that, like the cemetery, her book is not just about mourning, but also celebration. “After suffering loss, my capacity for love has expanded by 1,000. Initially I thought this book was for people who are suffering, or have recently suffered great loss; but everyone will suffer. I realize that it is for everyone who is trying to understand loss.”

Tagged as: Cori A. Winrock