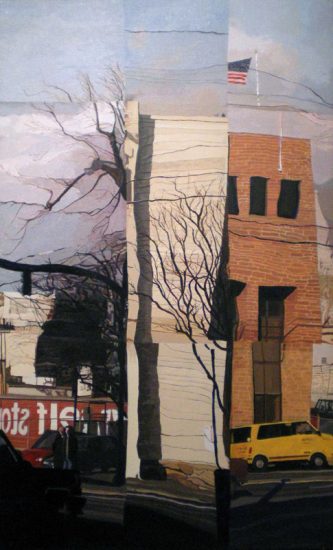 Laura Boardman recently invited some of her fellow artists to participate in an informal experiment to find out whether women as artists differ from men, and what the differences might be. Those invited were full-time painters with BFA or MFA degrees. Experience ranged from five to twenty-five years, and inclusion entailed a brief statement of “why I paint.” The non-scientific survey results –eleven artists including Boardman –are on display at Art Access until July 13.

The history of art has more to say about differing opportunities afforded men and women than about their differing abilities. Indeed, a priori assumptions are still the rule: when anthropologists recently measured the famous hand prints in ancient caves and found the hands were small, they assumed they must have been made by adolescent boys, despite the complete lack of evidence that the entire enterprise was not simply the work of women. Today, with restrictions stripped away by social activism followed by laws, women artists often seem to have more confidence in their choices than men.

One subject women were always allowed to paint is nature, and the floral and still life traditions were their inventions. Three of Boardman’s eleven artists paint flora up close. None has anything like the agenda that Georgia O’Keeffe was accused of and always denied, but all three depart from the still life tradition by placing their subjects within and against backgrounds. Connie Borup’s “Veined Beauties,” with its selective focus, is as much about photography as the moody colors of fall. Ann V. Maak’s lilies are also separated visually from their background. In “Contours of a Rose with an Inclination Toward Light,” Anne Morgan Jespersen’s professed interest in “the physics of light” unifies translucent petals and background shadows to make light a corporeal presence. 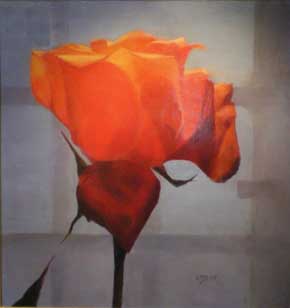 Anne Morgan Jespersen, “Contours of a Rose with an Inclination Toward Light”

Four artists chose to feature figures and imply narratives. Alice Perreault’s “My Babies” probably comes closest to positing a woman’s point of view as different from a man’s, but her eighteen portraits subvert any assumptions. Not only does she represent the gamut of neonatal physiognomies, but the cosmic cloud they emerge from turns out to be a vascular network: paint, the interface between artist and viewer, mimics the interface between uterus and placenta. If you want motherhood idealized, ask a potential father, but if you want the ideal merged with the truth about babies, ask someone who’s had one. Speaking of insider views, the mannerist proportions of Holly Mae Pendergast’s “Sister’s Contour” say many things about sisterhood indirectly and simultaneously, capturing the complexity of a fundamental relationship without neglecting the subjective perspective of the artist sister. 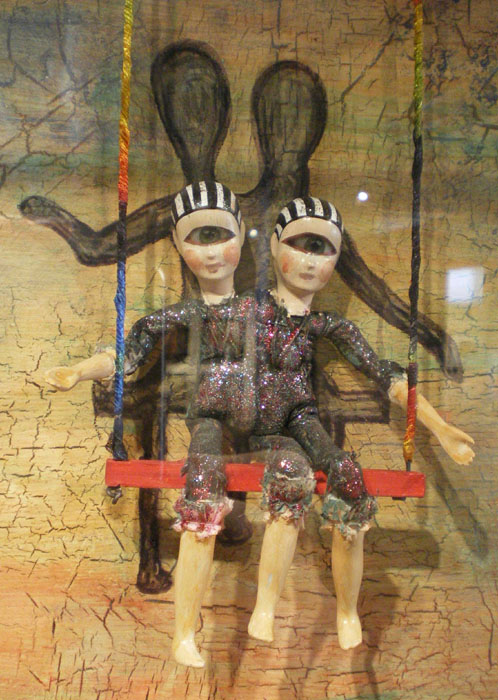 Marcee Blackerby, “In Search of the Third Ring”

Marcee Blackerby‘s magic realism gives “In Search of the Third Ring” an unsettling quality foretold by her statement, which sensually describes a mysterious process rather than give a reason for it. While it may protect the delicate, costumed performers who float before her painted backdrop, the vitrine enclosing them has the rhetorical role, like a circus ring, of marking the boundary between the mundane and the extraordinary, protecting them both. Blackerby’s uncanny theater makes a good point of entry to Bonnie Sucec’s six panels, which otherwise might seem to have migrated in from another show, perhaps in another city. Unapologetically self-assertive, they channel spontaneous impulses and capture mental processes on a pre-verbal level. Redolent of Surrealism and its expressionist stepchildren, they risk—no, disregard the risk to—their life spans by ripping their subjects from recent headlines. Let’s hope no one attending is so clueless as to expect demure, drawing room embroidery. Real painting has everything to do with attitude.

As the title suggests, “Seven Steps Forward, Seven Steps Back: Five” grows out of V. Kim Martinez’ interest in what might be called static dynamics. She has looked at factory machinery, incarceration, and cyclic migrations across the U.S./Mexico border: all institutionalized forms of action. Her hard-edged abstraction softens a little here, in a realistic depiction of ribbons dancing weightlessly in space; yet among its curvilinear components are captivity and imposed directions. 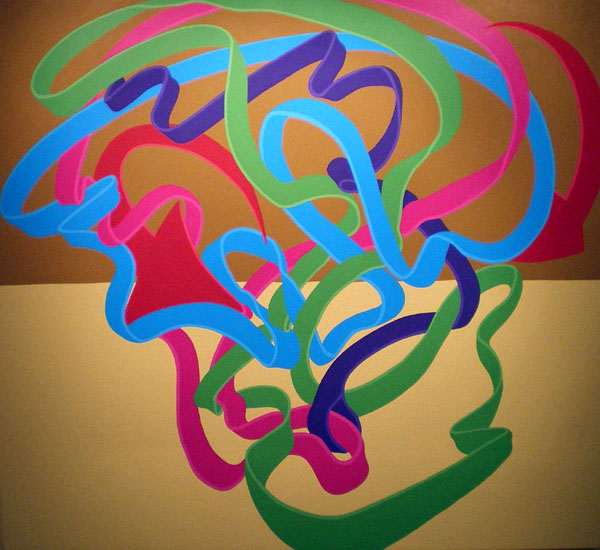 “Feminist landscapes” was one of the descriptive terms used to promote Contours. Perhaps all that means is none of the artists chose to analogize the landscape with a passive female body. What those who entered landscapes have in common is a conviction that close scrutiny of the land—as Joey Behrens puts it, “without assumptions”—combined with the process of painting can manifest environmental gifts we commonly ignore. In “Contour Drawing,” Maureen O’Hara Ure gives van Gogh’s calligraphic line a sense of appreciation and gratitude where the original was sometimes overwrought. Behrens’ “No Parking” and “Self Service” take their names from signs, ubiquitous components of downtown landscapes. Rather than “feminist,” they are pedestrian in the best sense of the word: the product of walking, or considering the source, bicycling through town slowly enough to witness the way reflections in glass facades are like paintings in frames, complete with new ways of seeing.

Boardman’s “Uneven Terrain,” though two-thirds scudding cloudscape, is well named. Somehow the shadows spilling across its corrugated surface gives this terrain a rhythmic, irresistible feeling of motion. Maybe Boardman answers her own question here, her “inner life” of painting finding a resonant response, an inner life in the world around her. If experience is one of the crucial things an artist brings to work—and I think it is—then Contours argues that women’s art differs from men’s to the extent that their experiences differ from, and complement, each other’s.