Chad Tolley & Members Show continues at Saltgrass Printmakers through the end of May. 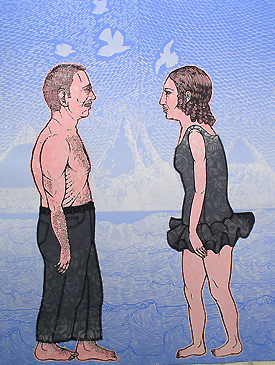 A postcard from SaltGrass Printmakers announcing a members’ show always gets posted by my door: a “must-see” event that by itself justifies a trip to Sugarhouse and the downtown environs. The collective of artists that make up the SaltGrass community consistently provides a broad range of legitimate, contemporary visions unified by reverence for craft and respect for visual truth. Even a sometime adjunct at a college art department knows that few make the transition from art student to artist, and printmakers face an extra-daunting set of obstacles. From fashioning a matrix and preparing ink to locating a press and finding space enough to dry an edition, every part of printmaking imposes material necessities that would be choices in another medium. Few individuals can lay hold of the resources necessary for a print studio. Then there is the inexplicable prejudice—five centuries on—that questions the legitimacy of the last great medium to allow the artist all–around control of abstraction in a representational idiom.

U. of U. graduates Sandy Brunvand and Stefanie Dykes founded SaltGrass to avoid the former trap, by replacing a state-funded studio with one sustained by fellow orphan graduates and printers. They ended up addressing the second issue as well when they discovered an international underground movement that makes and consumes prints in the belief that today as much as ever, and perhaps more, they matter as art. So today, SaltGrass is the three-dimensional projection into Utah time and space of that movement, bringing us visionaries who have learned how to cross borders without airplanes or passports, and in spite of language barriers. These missionaries have a message that can travel as easily as an envelope in the mail, yet arrive expressing an individual consciousness as eloquent as Rembrandt’s or Picasso’s. 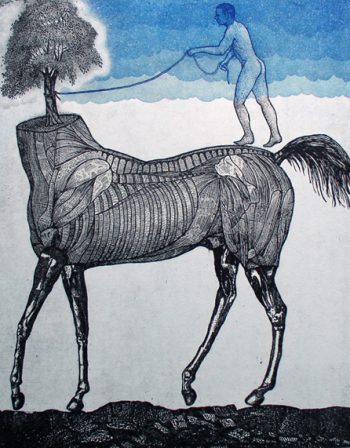 Chad Tolley, the latest pilgrim to Salt Lake’s print scene, isn’t really a stranger here. Although he spent a few years working in the Northwest after completing his M.F.A. at the University of Oregon, he earned his B.F.A. in what was then a small U. of U. print program. His return may be due to nostalgia, but may also owe something to following his muse. Recently he says he has begun to revisit themes from his early years.

The first task of printmaking is to bring the surface to life. Tolley does this with a bravura technique rooted in Vincent van Gogh’s, whose mark-making was informed by Georges Seurat’s pointillism. In “Corresponding Parts II,” the entire sky joins in the acrobatics of the birds cavorting above the couple’s heads. Her bathing suit and his trousers carry the imprint of roses, while the ground beneath their feet and the mountains beyond the lake heave with the topographical equivalent of heavy breathing. When we’re in love, sometimes the whole world seems to share it, but the grimaces on the lovers’ faces argue that it’s the other way ’round: it is nature, raw biology, that speaks through us whether we will or not.

Ambiguity, ambivalence, or irony turns up wherever Tolley looks. In “Fortress,” a landscape triptych, rain falls into an endless body of water while in the rocky foreground a house is either menaced by, or contains, a wolf, seemingly wearing a suit, looking back over his shoulder. Just what is the connection between threat and defense? And when the strong become fearful, who is really in danger? In “Hunter’s Safety,” a red-clad figure holds a tree branch between himself and two such wolves, raising the question of who fools whom. Lines suggesting clouds also resemble a machined surface. Tolley thinks a lot about connections: between people, between people and nature, between the menaced and the menacing, but also between experiences and the ideas they provoke. 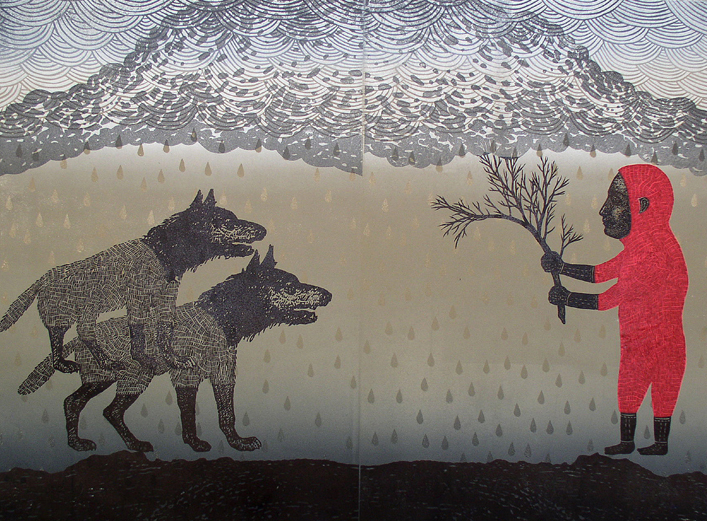 At times Tolley seems to dream surreal dreams. In “Batman and Robin Paint the Batmobile Red,”| all three principals float in air. The unlikely botany of Two Mor Flor passes off the balance organs of the inner ear as plant structures. “Another Naked Dream” names the act, standing the naked protagonist like a circus rider on the bare back of a transparent-skinned horse full of fantasy anatomy, its head replaced by a tree. Such willful subconscious eruptions distinguish dreams as the Surrealists sought them—direct connections to universal truth—from the wishes we choose to dream. In “We Don’t Want to Live in a Birdhouse,” the wish is to escape a nightmare. Onto, or through, an oddly flat house is projected a scene of cyclical warfare between man and nature: beneath a heavily cultivated tree, birds attack a cowering figure on a landscape both contained by and simultaneously outside the birdhouse. We’ve passed the point where humor and anxiety are mutually exclusive. We may not have reached the sublime, but we can sense its presence from here. 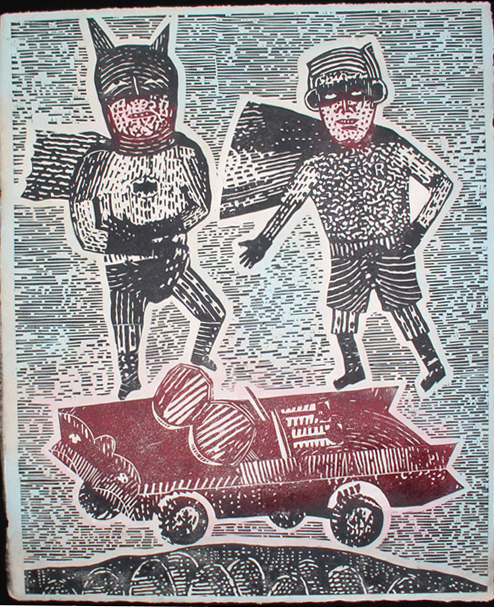 Tolley’s sophisticated color schemes, which emerge as much from elaborately patterned textures as from choice of inks, contributes to the sense of sharpened, slightly heightened vision given by the drawings, with their poised figures and odd perspectives. Blues and grays shimmer with an almost metallic glow, while the red coat of the hunter makes him as strange to us as he must be to the wolves. While this may suggest that we are somehow seeing through to another layer, there’s no indication that it’s a spiritual level or a deeper reality. Instead, Tolley’s narratives suggest the comic sensibility of Hogarth or Jane Austin. We’re seeing what’s there, but at the same time we are informed of the significance of events for those privileged to see through social blinders and grasp something real within them, not behind them.

Tolley is young, but he shows promise of even more satisfying encounters to come. 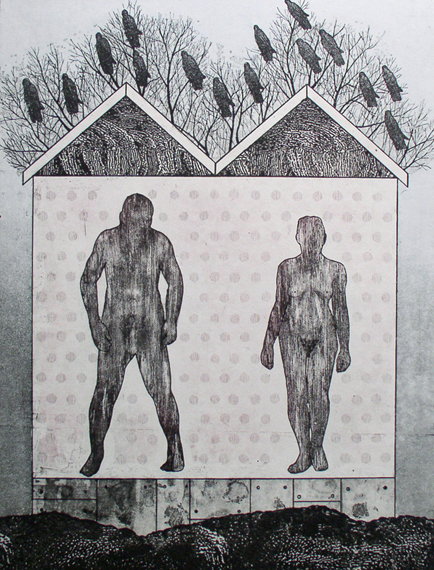