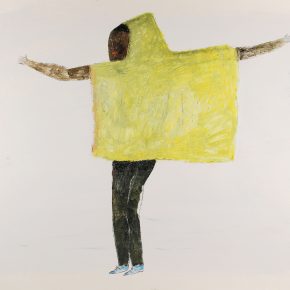 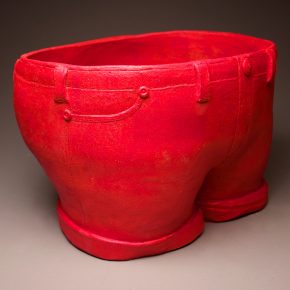 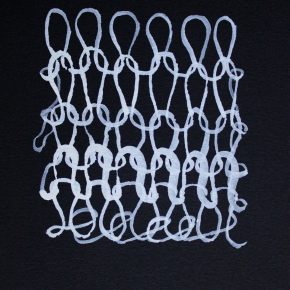 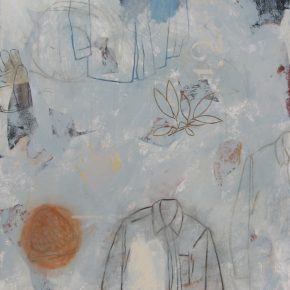 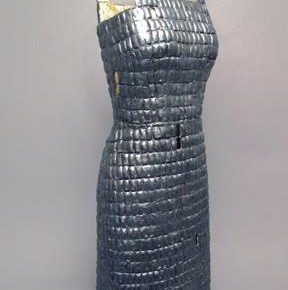 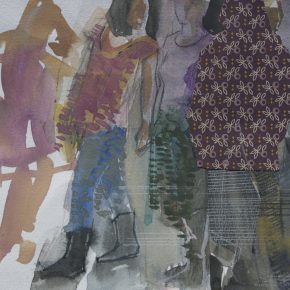 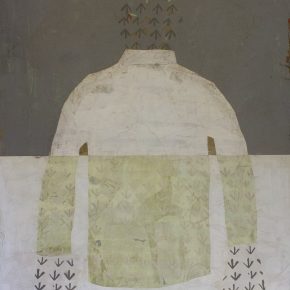 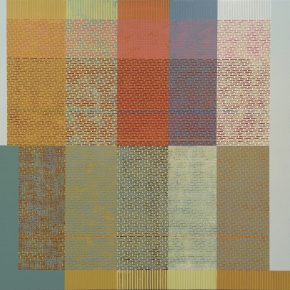 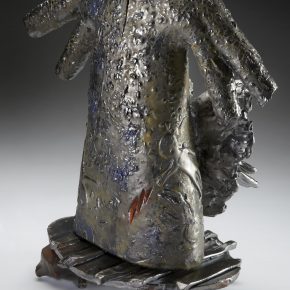 There’s a hint of cruelty in the Rio Gallery’s choice to devote August, a month most people spend wearing as little as modesty permits, to the subject of clothing. Among the nine artists here, there are enough heavy garments, long-sleeved shirts, and gloves to bring a suggestible viewer to the brink of heatstroke. On the other hand, there’s enough engaging art, enough fine details, intriguing narratives, and playful visuals to keep an art lover inside the cool vastness of the Rio until the heat passes. Clothing, which after skin is the most universal human presentation, and the primary one most of us get to choose, offers endless possibilities to the clever artist, and if these nine clearly had fun with the theme, they also uncovered some of the symbolic and sensual riches clothing has to offer.

I’ve been covering two of these nine artists for as long as I’ve been in Utah, and yet once again each presents something entirely new. Brian Christensen’s Pop-inflected ceramic sculptures defamiliarize what ought to be mundane articles of apparel. “Mood Ring” is the least odd, though its bonus size, meticulous crafting, and mood-conjuring glaze lend it unexpected legitimacy. “Desperado,” a balaclava a Mexican wrestler might wear in a nightmare, shows how disturbing a simple trio of eyes and mouth can be. “Hot Pants” recalls the old joke about clothes put on with a spray gun, boasting a delightful flair for implied anatomy that is playful on the outside, but takes a different tack within. Monumental power inhabits “Free Range,” a shirt meant to express its absent wearer’s sense of freedom, though its implied offer of an embrace sends a contrary, equally powerful signal. Meanwhile, tucked in a quiet corner where an enthusiastic viewer can spend some intimate time with them, Sunny Taylor’s two weaving studies, one of satin and another of cotton, memorialize through her own painstaking efforts the uncountable hours devoted to this most necessary, yet inadequately credited human activity. At the same time, her dense, never quite repeating pattern of color and line draws analogies between many ancient and modern technologies: masonry and transistors, tiles and compact memory, textiles and the invisible web that increasingly knits all humanity together. In spite of underlying simplicity, they achieve, through a layering of large scale over small, an apotheosis of balance and rhythmic eloquence.

Only two artists chose to look at clothing conventionally: that is, worn by human figures. Fidalis Buehler shows six vignettes, each with his signature combination of magic realism and graceful distortion. A woman stands before two tall, distant palm trees, bending over to pluck an identical-sized palm tree that, due to a trick of perspective, barely reaches the hem of her dress. The sleeves of a man’s shirt erupt not with hands, but with gunfire. A man with one short and one long arm wears an asymmetrical, yellow poncho that elegantly matches his proportions. Buehler takes all of the elements of vision we have agreed to see in the most unnatural manner, as suggested by the square grid in “Pottie Training,” and restores them to the way they look to the unbiased eye. Jennifer Barton’s distortions come from a completely different source; she sketches her eight sets of figures and the shapes of their clothes in motion, with the result that gesture becomes the painted equivalent of posture, and an eye educated to the exigencies of extemporaneous drawing hardly notices her compromises, and may even prefer their version of things.

Joseph Ostraff’s “Sunday Bests” prove once again that the pleasures of paint arranged on a constructed surface need have nothing to do with the past or future of art. Instead, in their voluptuous textures, which the hand feels as the eye devours them, those delights are ever present. The arrow- or tripod-like figures are said to derive from clothing worn to identify Irish prisoners, which may explain why they sink into the collaged and painted grounds like so many escapees losing themselves in the mist. In a fourth painting, the sewing patterns lost and found in the first three come forward, while a small army of crouching figures come and go among flurries of paper scraps. Gary Barton’s contrasting palimpsests of cloudlike color and half-formed, or half-dissolved bits of clothing are thinner than Ostraff’s layered grounds, and in place of incarceration, they hint at the lesser rigors of Mormon culture in their emphasis on buttoned-up white shirts. In “Don’t Look,” drawing and paint seem in conflict, the scrubbed color almost managing to cover up what was drawn first. Gloves, perhaps the only standard item of clothing done without more than they are worn, figure large in this cosmology.

Jen Harmon Allen and Von Allen take similarly contrasting approaches to sculpting garments, though both erect them freestanding, like carapaces or castles. Jen Harmon Allen’s dresses are suits of armor, complete with a metal mesh skeleton into which she’s molded, fired, and glazed clay in symbolic colors: one looks like metal, while a nearby pair reverse each other’s inside and outside colors, like reversible identities. Missing squares could be portals through the wall, or merely chinks in the armor. Von Allen’s three full-length garments, all from the ”Gospel of Gladys,“ stand shiny in gunmetal glaze, each on a detached base. Covered as if at random with cryptic texts, indecipherable images, winglike hands and handlike wings, they are like garments meant for apocalyptic angels on their way to the final battle.

Daniel Barney’s swatches, painted in white line on black backgrounds, are like the bits of knitting done to gauge stitch and needle sizes, or try a color or pattern. It’s tempting to see no accident in the way their black backgrounds and glass covers cause the viewer—or in any event the viewer’s reflection—to enter into the web of yarn. In a nearby glass case, a knitted glove displays unsettling proportions: surely the fingers are too fat and short, mere stubs. In another case, powdered graphite, various graphite drawing instruments, and a skein of graphite-colored yarn bring Barney’s portion of Articles of Clothing, and with it the entire show, around to complete a circle. There is nothing so mundane that it cannot be infused with mystery, given sufficient interest and enough exposure. Clothing, a second skin, in a way becomes the most personal of possessions, and an open (and shut) invitation to the imagination.