Con Artist tonight at the Film Center, and Zabriskie Point at UMFA 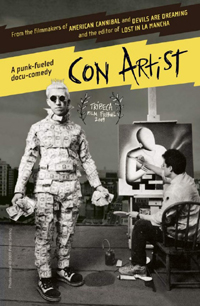 Con Artist, a film about 80s art-star Mark Kostabi, will be showing at the Salt Lake Art Center tonight (Friday, November 13) as part of the Salt Lake City Film Center’s Creativity in Focus program, which shows an art-related film every second Friday, through December. The film is free but a $5 donation is suggested. Below is a review by Levi Elder.

I had the impression that CON ARTIST was going to be a mock-umentary. I can’t tell you why. Maybe because I’d never heard of Mark Kostabi. Maybe because he makes himself out to be a total buffoon. But as the story unfolds you start to realize the no amount of fakery could have recreated all of the archival footage. And let me tell you, this cat is a character.


Today, having built back his business but not his fame, Kostabi oversees a staff which pumps out and sells approximately one thousand paintings per year out of his “Kostabi World” studio in New York City. Many of Kostabi’s employees admit that they’ve never seen him paint. Anything. Ever.

After accomplishing initial success in the 80’s LA, he moves to New York and becomes an ‘art-star’. His gimmick: to mass-produce, sign, and sell thousands of paintings per year, conceived of and executed not by himself, but by a revolving stable of hired hands supported by an energetic PR team. Eventually, his brazen Capitalistic greed, overt self-promotion and outrageous behavior caused a remarkable fall from grace during the 1990’s recession.

Over the course of this highly energetic comedy, Kostabi’s indefatigable obsession with getting back on top manifests itself in bizarre attempts to regain prominence and find happiness, equating fame with finding true love. Now approaching fifty, still single and an art world pariah, Kostabi tries to woo women, receives a high profile commission from the Vatican, sells paintings on Italian TV, speaks embarrassingly at a “Master’s Tea” at Yale, and stars in a self-financed public access TV game show wherein celebrities compete to title “his” paintings. Finally, as he tries to gain control of the film itself, Kostabi’s self-conscious machinations strip bare his essential narcissism, illuminating darkly comic insights not only in to his own ego but in to America’s celebrity and money obsessed culture.

Not to be outdone, the UMFA also offers free films. This Saturday it is Michelangelo Antonioni’s Zabriskie Point at 2pm. The movie is part of this fall’s Desert Secrets Film Series. The screening, to be held in the Dumke auditorium at the Museum, includes an introduction by Dr. Donna Poulton. The film is rate R. For more information call 801.581.7332.