Common to Us All: Why All Art Is In 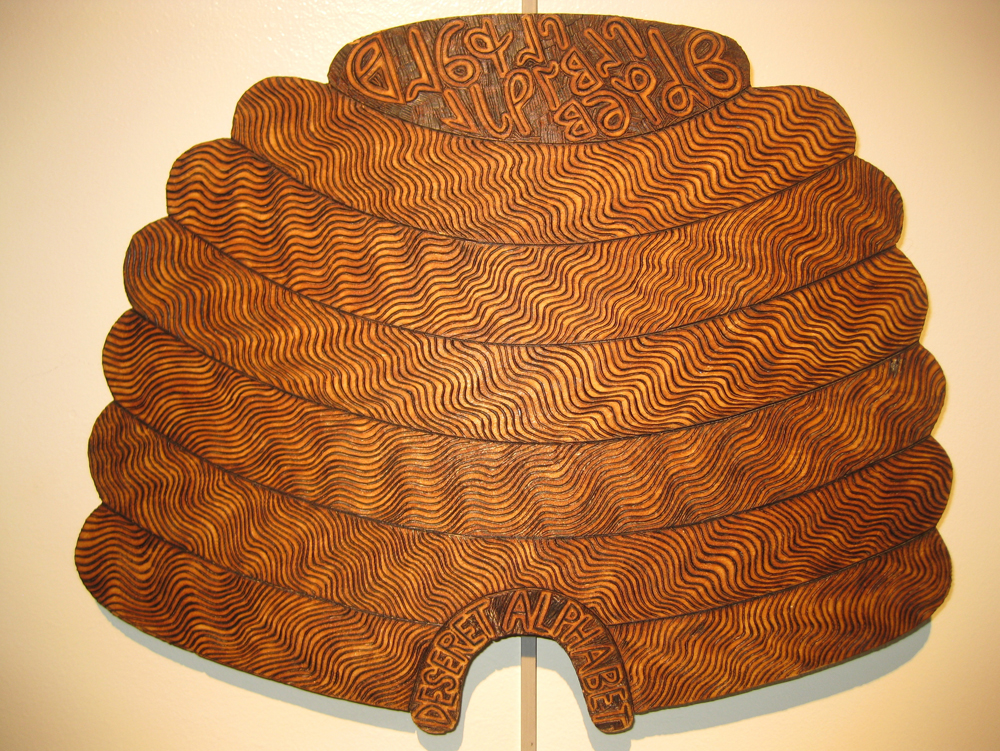 As Art Access celebrates its twenty-fifth year as a force in Utah’s art community, they could pick no better show than their current one, Outside is In!, to highlight the aim of their exhibition space: as director Ruth Lubbers says, their two galleries are there to “provide a voice to relevant social issues, which can be discussed through the vehicle of art, to everyone.” Outside is In! addresses a type of art that pushes the limits of what can be accepted as fine art while addressing basic human elements of creativity, expression, and the need to belong. Individuals, like French artist Jean Dubuffet, and institutions, like the American Visionary Art Museum in Baltimore, have advocated outsider art for decades as a viable art. Outsider art takes an egalitarian perspective on art making and extends the dynamic of artist and art indefinitely. It negates the necessity of training and includes forms and means of expression that might be atypical of what is generally accepted as fine art. The polish of its finish might not be as fine, but the relevance of outsider art is universal.

The creative ability is part of what makes us human — what separates us from the rest of the animal kingdom — and allows us our world. In a developed society like our own we have established roles for creative people. But outside the sphere of the professional artist (those trained in the practice and who assume it as a lifetime calling) there is still a basic human faculty and a fundamental need for expression. That need may be especially strong in marginalized groups or communities whose creative endeavors don’t fit in the roles established by the larger culture. Many feel adversity at some point in their lives and this may pull out an innate desire to use their creative spark to address conflict or struggle. They are not working in the fine art context but their work has the potential to resolve internal conflict and repression, something we can all appreciate.

Art from minority groups is just one of the many categories that has come under the banner of Outsider Art. Others, according to Roger Cardinal, are “artists who are self-taught, the naïve, the innocent, the visionary, the intuitive, the eccentric, the schizophrenic, the developmentally disabled, the psychotic, the obsessive, the compulsive.” Outsider art tends to be highly abstract, symbolic and expressive. The art that is manifest by the outsider artist might be described as earthy, with archaic methods using basic artistic qualities such as symbols, motifs, color and design. There is an internal dialogue happening between the artist and the work that might be incomprehensible to the viewer, but the intensity of the primal need to express is usually evident. Outsider art as a whole speaks vociferously of something very authentic, a state of purity, a state that the trained artist may find difficult to attain. When the artist becomes aware that the work will be seen and examined this self-consciousness tends to negate this state of purity.

Deciding who exactly is “in” and who is “outside” the art world is a difficult proposition. With little or no formal training other than a self-taught regimen of rigorous drawing practice, Vincent Van Gogh was an outsider artist. He was disabled and found his voice in his art, through his act of creation, which for him was compulsory. His most prolific time was that spent incarcerated alone in St Rèmy, the mental hospital in southern France. He is one of history’s most venerated artists and much of who he was and what his art is, is the essence of outsider art. A state of inner conflict reached some resolve as his mental and spiritual vision allowed him to paint. His suffering affected how and what he painted, which was essential to his well-being and freedom of inhibition. Van Gogh was not concerned with the critic or audience reaction to his painting but only the healing it brought him. His work is a language of symbols representing his inner-self, a language we can speculate on but never really know.

Outsider art is not, by its nature, generally viewed by an art audience. But institutions like the American Visionary Art Museum, and locally, Art Access Gallery, are bringing these artists to the attention of the public by providing them an institutional setting that puts them on a par with their more traditionally trained peers. These exhibitions reveal that these artists, that are considered “outside” are actually “inside” because they share the spark of creativity common to all.

In Outside is In!, we see the work of nine outsider artists whose expression is visually bold and meaningful. The beadwork of self-taught Ute artist Radford Cuch is impressively refined and structured, using beads, a traditional artform for his tribe, with pen and ink on flat canvases. The pieces displayed are inventive and thoughtful. He incorporates an ancient craft along with line drawing in highly symbolic compositions. His most impressive work is a simplification of four figures seen from behind, each rendered homogenously reflecting tribal unity, but the complex beadwork used on each cloak has distinct and intricate pattern and color revealing strong individual identity within the tribe.

In her expert self-taught embroidering techniques, Carole Alden accomplishes what many of the best historical artists have tried to do but fall short. Having spent five years in prison, Alden fully understands a concept as profound as freedom, and is able to express it graphically and intensely. She understands one moment breathing fresh air, walking beneath the sun, and then spending the next five years in a closed cell behind bars. Who better to express the concept of freedom, so basic yet essential to the state of being human, than an outsider who loses it? The images Alden creates with embroidery are symbolic and intense. She shows herself not behind but bound by bars that engulf her body, while beyond her is a plane of luscious green hills, vivid blue sky and a many-colored sun.

The visionary Bob Moss takes a technique like wood burning and masters it, developing sculpture that is alive with abstract motifs, color, shape and symbols. Incorporated into these forms are what is seemingly a symbolic script of his own but is in fact characters from the Deseret Alphabet, a language system developed by the early Utah pioneers with the aim of facilitating the merging of diverse language groups into a unified community. The alphabet is incorporated into an incredible range of primitive and abstract patterns, faces, and designs and is a complex iconography materialized in whimsical and comical sculptured shapes and panels.

Peter Scott Stone has autism, and his contribution to the show reveals his ability, in simple line drawing, to render the human form, untrained, but with the seed of great ability. This simple profile reveals the hand of the artist who can replicate complex natural shape, yet it is the eyes that are the most compelling. These eyes evoke a sensitivity masked by defense yet they cannot hide inquisitiveness and intelligence. These are the eyes of an outsider.

Art Access has done a wonderful service, both to the individuals in this show, and more importantly to the community at large, by demonstrating that the creative impulse surges forth out of people whether or not they are trained or are part of the dominant culture. But this is not just part of the Outside is In! exhibition. In fact, this is what Art Access does every month, showing well-established, professional artists alongside more marginal groups. In fact, some of the artists in this exhibit, like Marcee Blackerby and José Hernandez, have already had important shows at Art Access.

Outside is In! is at Art Access Gallery through April 10. In addition to those artists mentioned in the article the show also features Kaziah Hancock, Jesse James Whitfield and GUTS4