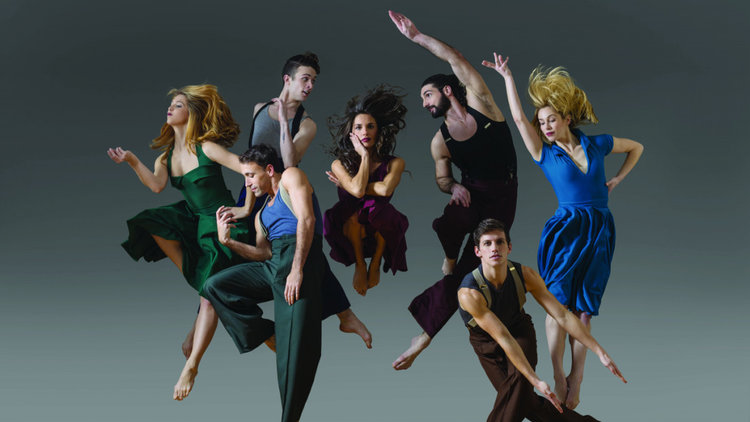 As an undergraduate student in 2008, I discovered Parsons Dance when I serendipitously checked out a DVD of the company, released in 2001, from a music and dance library. Upon watching it, I fell in love with David Parsons’ quirky choreographic style.

One of the pieces on the DVD, Reflections of Four, was performed by four women on a stage filled with water, each experiencing a different type of weather. There was also a humorous piece about the woes of mail delivery (The Envelope) and an idiosyncratic piece set in a restaurant-size kitchen, dancers piling on top of one another as a set of eyes rose above a large vegetable cutting board (Fine Dining). Ten years later, I can still remember these works, as Parsons’ unique and strange presentations were unlike anything I had ever seen.

When I learned Parsons Dance would be performing at Brigham Young University the semester after watching them on DVD, I anticipated seeing witty, humorous, and viscerally sensitive work, but was underwhelmed by what was presented. The concert seemed more focused on presentational affectations and general accessibility rather than on the witty content and strange gambol of Parsons’ earlier works.

With these experiences in my pocket, I attended the Ogden Symphony Ballet Association’s presentation of Parsons Dance at Weber State University with the hope that David Parsons’ creative output had returned in the way I first experienced it. I also came to the show on the heels of taking a technique class from two company members, Zoey Anderson and Justus Whitfield, earlier in the week.

The show, at WSU’s Val A. Browning Center on March 3, opened with a balletic piece, Wolfgang. Commissioned by and created for the Aspen Santa Fe Ballet, the piece (set to Mozart) unfolded in three sections. Three men and three women began; Parsons’ longtime collaborator Howell Binkley’s fantastic lighting design made them visible only by white side light. Soft and elongated port de bras was placed on top of petite allegro steps, all while the dancers changed formations, entered and exited the stage, and took turns in heteronormative duets. The revolving transitions exposed rich dimensions of the proscenium space, and the dance included a plethora of chaîné turns (sealed as a theme due to their sheer number). One female dancer did chaînés around her male counterpart more than a dozen times, which was met with applause from the audience.

In the second section of Wolfgang, when two men delicately lifted their female partners, the third male opted to drag his. In the third section, dancers unexpectedly lined up at the front of the stage, hands on hips, while one male dancer collapsed to sitting, nonplussed, his hand resting on his knee. After two duets were sequentially performed in rectangular spotlights, the third and final partnership advanced into a spot holding one shape and then retreated the way they came with no additional movement. Parsons’ wit and humor were thinly veiled in this well-crafted, well-executed ballet, with enough oddity amongst the regularity of the ballet vocabulary that I found myself gently chuckling.

The second piece was an excerpt from a duet, Finding Center, that was created in 2015 for the Harriman-Jewell Series in Kansas City. It was a breathtaking piece in which Zoey Anderson and Justus Whitfield utilized counterbalance and Pilobolus-esque techniques to effortlessly rise and fall in the spotlight for several minutes. I can’t remember Anderson ever touching the ground. I would bet money she never did, though I cannot be positive because I was distracted by the audience applauding at inappropriate times. The lifts were impressive, but the moments of stasis and settling were disrupted by and lost in the clapping. Should the audience’s trick-promoting response have been absent, the salient moments of the duet would have allowed more pause for thought and offered even more intensity and serenity.

UpEnd, the third piece, was co-choreographed by Parsons and Asherie. I was pleasantly surprised by the percussive score created for the piece, as I had expected generic house music similar to what was used in the technique class. Anderson, a Utah native, began to rise as the star of the show beginning in UpEnd. Her ability to articulate agility, fluidity, and staccato movement upstaged her peers, particularly the other women. She found an equal match in technical mastery with Whitfield, with whom she partnered in this work.

The movement vocabulary created for UpEnd was even more original and exciting than what I had experienced in the technique class, but the piece as a whole lacked a clear arc and ended strangely. To wrap up, Anderson and Whitfield made contact a few times, held hands, and then finished in a quick and unexpected embrace as the lights faded out. Maybe the arc was meant to mimic that of a shooting star, because the narrative between Anderson and Whitfield both began and concluded in about 10 seconds.

The program’s second half opened with Kind of Blue. Commissioned by the Umbria Jazz Festival in Perugia, Italy, this piece made me more than kind of blue: it made me kind of bored. A predictable and gendered quartet of two males and two females dancing to blues music only briefly captured my attention, and I was reminded of Fred Armisen’s “Stand Up for Drummers” (currently streaming on Netflix). In Armisen’s standup routine, he asks the audience to raise their hand the moment their mind wanders while listening to a song. He turns on a jazz track, and within six to 10 seconds, the majority of the audience (and Fred) has raised their hands. For me, watching this dance validated Armisen’s hypothesis on the engagement power of jazz. But, it was an accessible piece, with lots of shoulder rolls and sassy skirt tosses, so I’m sure it fit well within the programming at the Umbria Jazz Festival.

Finally, the piece came we all had been waiting for: Caught, David Parsons’ seminal solo. Caught is a beautiful combination of athleticism and technology, and allows the performer to appear as though they are floating in space as they jump into the air more than 100 times. It is the dance version of a flip book, as each jump is caught at the height of its suspension by a flash of light. The solo is performed traditionally by a male company member but at this show, Anderson performed the solo effortlessly, even better than I remember it being on DVD or at a 2009 performance. The audience was on its feet at the end and I wanted to see it at least 10 more times.

The show concluded with Whirlaway, commissioned in 2014 for the New Orleans Ballet Association. Joyful and groovy, it was a nice number performed to Allen Toussaint songs, and was choreographed and executed with prime musicality. Again, it featured the predictable gendered coupling of males with females, but this time, there were four males and three females. Anderson once more took a principal role but, while she is absolutely beautiful to watch, I began to wish I could see another performer’s strengths highlighted.

Whirlaway was another well-crafted dance with dimensionality, character, and precise execution, but, as my viewing companion stated, “I always find it sad when I watch professional dancers perform so well, but still feel bored.” The choreography was not bad or boring, and the dancers were energetic and impressively athletic. But it may be that I was tired of seeing works commissioned by other arts organizations and would rather have seen a work motivated by the personal interests and wit of David Parsons himself. That was the kind of work I saw in the company’s 2001 DVD from the library.

I was very impressed with the Parsons dancers, particularly Anderson, as well as with the musicality and craft expressed in Parsons’ choreography. I appreciated the collaboration with house choreographer Asherie and the inclusion of a female performer in the well-beloved Caught. However, upon reflection, the thematic material for each of these pieces (excluding Caught) might be found on a list of ideas created by a student preparing for an audition. Fusing modern dance with blues music or house dancing, or adding a few quirky gestures to ballet, are not hugely innovative ideas. I understand it probably pays to choreograph commissions; the dancers need to be paid, and accessible themes appeal to a greater variety of dance consumers. But I would love to see David Parsons create a piece based on ideas he is interested in exploring, rather than just those that result as part of a commission.