Technically the MFA Maisch is finishing at the University of Utah is in ceramics, but clay makes up just a portion of her work. The objects in Maisch’s studio are a combination of organic and industrial materials, with a mixture of created and found elements. All share a common feeling of having come to exist through some sort of natural evolution rather than having been made by an artist.

In the studio there are small balls of transmogrified pantyhose filled with smooched fluff, unfired clay, and coiled tube. There are several big unglazed porcelain funnels on tables and their latex counterparts droop from hooks on the wall. Extruded porcelain tubes lie next to sharp bulbous forms like the abandoned exoskeletons odd, angular creatures have outgrown and left. The work is dominated by a neutral palette: old bone, flax, ash, and earthworm tones fill the room, as well as a spectrum of flesh-colored pantyhose, and the black of ink and char. She has been experimenting with chili red bindi powder, which fills hand built sake-sized cups, adding a small percussion of color to the assemblage. The porcelain work is mostly unglazed. She generally likes to see the surface of a thing as it is. Glaze, she explains, “covers up the intrinsic quality of the material underneath.”

She says she is always scanning the world for materials, even if not consciously. It might be hiking in the foothills with her dog, or searching the aisles at NPS or Home Depot. “Or if I go into the desert,” she says, “I think I’m always looking. And, I think, it’s not looking, but observing, in a sense. Knowing that there’s good stuff everywhere. I’m not looking for anything in particular, but I know it when I see it.”

Like the moment she became taken with gut. “I was watching Julia Child on her cooking show,” Maisch says. “And she was making a pâté, and she was putting over it a stomach membrane that was just this lacy, beautiful thing. And I remember, Steve and I,” (her husband, Steve Maisch, who teaches in undergraduate studies and economics at the U) “were on a road trip, and I could not stop thinking about it.” Now, throughout Maisch’s studio there is gut encasing various objects: gut stretched around tubes, gut wrapping shards.

“I’ve found with a lot of these things,” she says, gesturing across the studio, “that in my own life, they’re talismans, these ways of creating—I don’t want to say sacred, but these… wishful… moments. Or ways of imbuing little bits of magic into things.”

Maisch is able to infuse even the manufactured items, like the industrial rubber hose, with a kind of wonder.

“You change the context, and it’s no longer what you originally thought it was,” she says. “There’s a potential to re-envision it and its potential as a thing that we interact with.” That is where the magic comes in. “There’s beauty and potential in all of the things around us. It’s just a matter of allowing ourselves to see it, or framing it for ourselves differently.”

She develops much of her work through play. “I’ll get something, and I know that I need it, but I’m not really sure why,” she says. And then she starts trying different materials together. For example, she started playing with the nylon stockings and when she stretched the stockings over the porcelain funnel forms she had been working with, something clicked. “They almost, I mean, I make them, but they kind of make themselves, as well. They sort of say what they need to be.”

Maisch has a warm demeanor. She’s funny and smart. She wears a blue dress that matches her blue eyes, hair pulled back into a sun streaked deep golden ponytail. In the other part of her life Maisch is the co-owner of a catering business, The Blended Table. She started doing catering work when she was 18. Three years ago her cousin, Emery Lortsher, asked if she would like to be a partner in her business, and Colour jumped at the opportunity. She says that it is challenging running a business and going to grad school at the same time, but that the work is very satisfying and somehow complementary. Even if just for the fact that the two sides of her life require such different ways of thinking. Sometimes after a day of catering she comes home happy and satisfied, but also feeling a bit as if she’d been hit by a truck. Whereas in the studio, she says, she can almost turn her brain off. “It’s hard, sometimes. Sometimes making stuff is really hard. But also it’s a soft, flowing space,” she says. 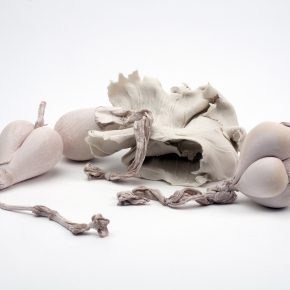 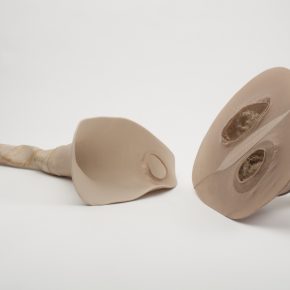 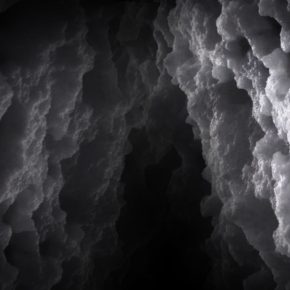 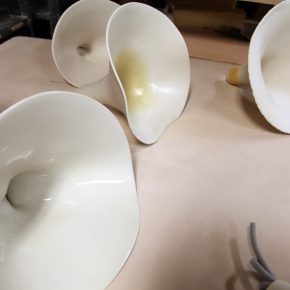 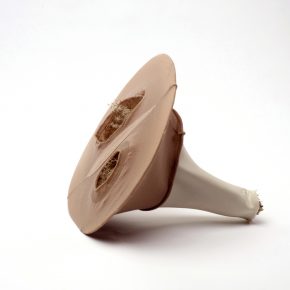 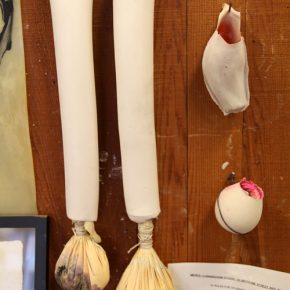 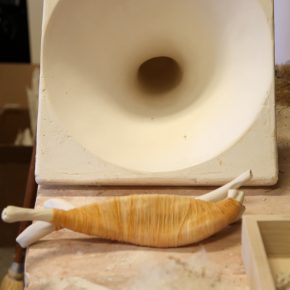 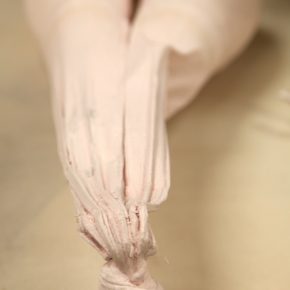 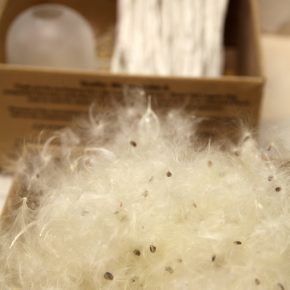 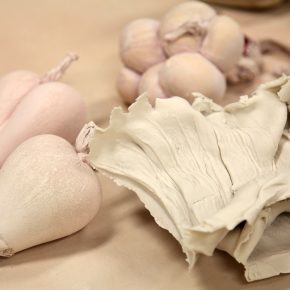 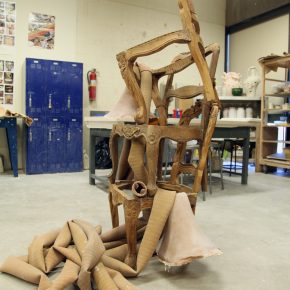 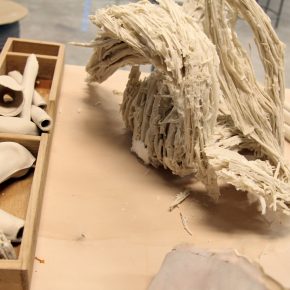 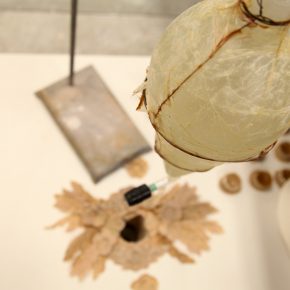 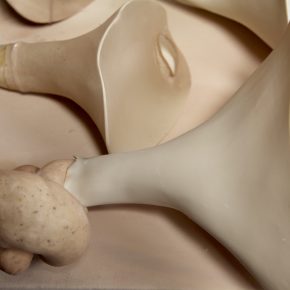 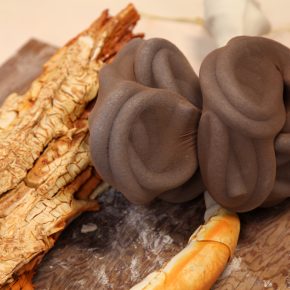 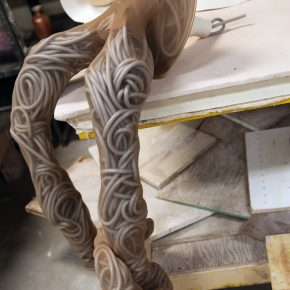 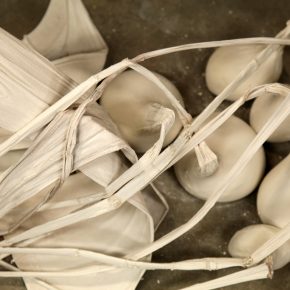 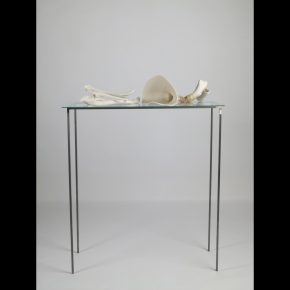 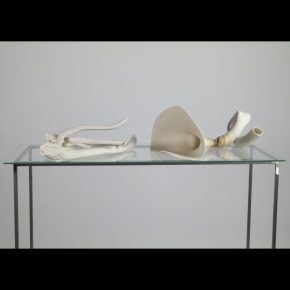 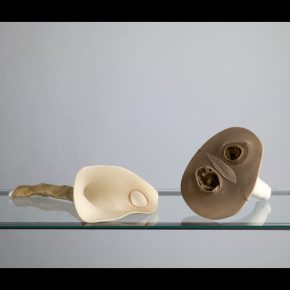 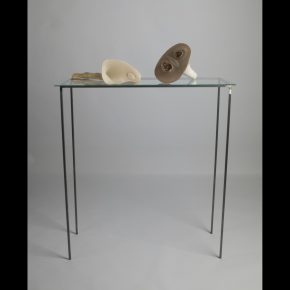 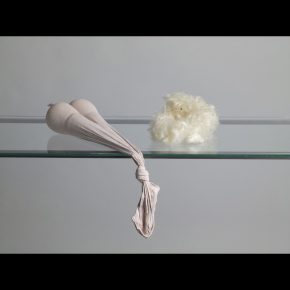 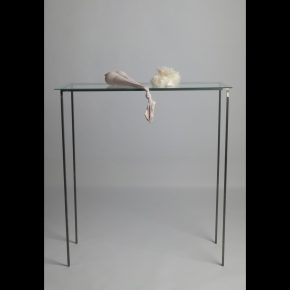 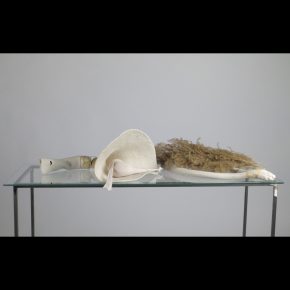 She’s working on her MFA show that will open at NOX Contemporary June 21st. At over a month out, she’s still exploring what the show is going to be, and she seems a bit nervous, but also she seems confident in her process. “I’m finding I’ve been really non-linear in how I put all of this stuff together,” Maisch says. “And it’s still kind of coming together for me as far as where it’s coming from and what it is.”

Her own path to becoming an artist was similarly non-linear. She studied Spanish and Political Science for her undergrad degree. She never expected to be an artist. “I didn’t start making art until I was around 27,” she says. She’s in her mid thirties now. She was born and raised in Salt Lake until her dad had a work opportunity and moved the family to Huntington Beach when she was starting 9th grade. She said that it was a rough move, but ended up being a very good thing for her. “Just seeing that the world isn’t just like this,” she says, meaning Utah. “Because this is a pretty unique place.”

She came back to Salt Lake to attend the University of Utah for the Spanish/Political Science degree, and afterward stayed, working, as she puts it, “a thousand odd jobs.”

But then, when she was 27, she took a painting class, and everything changed. “And I was like: wow. This is what I want to do,” she says. “But it’s funny, because my dad’s a ceramic artist” (Kevin Frazier, who also received an MFA in ceramics from the University of Utah) “and my grandma’s a painter” (Donna Frazier, who taught watercolor classes from her home studio for years.) “But I was just like ‘tssss: no,’” she holds her fingers up as if to ward off vampires. So art was in her blood, but she never intended for it to be her path.

Nevertheless, she was hooked. The painting class got her. She returned to the U, and did two and a half years of art classes. Initially she thought she’d do painting, but ended up loving the physicality of working with her hands, and she fell in love with sculptural materials. She says she didn’t beeline right to clay, despite having been around it her whole life. She moved through different materials until she was working on a project where she wanted to make porcelain tubes.

“And that is when I started working with clay,” she says.

Between the undergrad art making and grad school she had a slew of solo and group shows, and was artist in residence at the now defunct Pickle Company. She recently found out that she was granted a yearlong residency at UMOCA, so she has that lined up for after graduation, and she’ll be teaching at the U as well.

First though, she has the show at NOX to think about. Some of the work is done—like the hose, the funnels, and a video installation—but some of it she is still working out.

“Well, this one is not good, but I’m doing big forms with the milkweed,” she says, “and then some things with grasses, and ash.” She pats a pale duckling gold glowing cube-ish pouf full of light and peppered with a gritty constellation of dark brown seeds. She sprays milkweed fluff with Aqua Net to create the forms. There is a big bushel of 4-foot tall chestnut brown grass leaning against the wall, and a mound of grass-shaped ash on a table. On another table there is a large pile of thin ceramic husks, sharp like broken bird bones. They make small tinkling sounds as her hand moves through the pile. They were once grasses that she dipped in porcelain slip and then fired. The grass burns away in the kiln, leaving only its echo, a matte white cast. She is not sure about the husks; she’s still trying to work them out conceptually. She is sure that this particular pouf isn’t working.

It feels funny, in a jarring way, to think of the sweet fluffy hunk falling on a continuum of good and bad. But the comment also illuminates the rigor that Maisch applies: the work is intuitive, but very deftly edited and curated. She explains that the pouf had gotten over-coifed because she was trying too hard to bend it to her will. It just didn’t want to be a cube.

“You have to allow the material to do what it will do,” she says. “Because you kind of can’t make it better than that. Like, allowing stuff to flow where it wants to flow, or fall where it wants to fall, or sag where it naturally wants to sag. It’s like a manmade tree versus a tree that exists in nature. You can’t…” she says, groping at the wordless place, “…all of that imperfection? You can’t compete with it.” 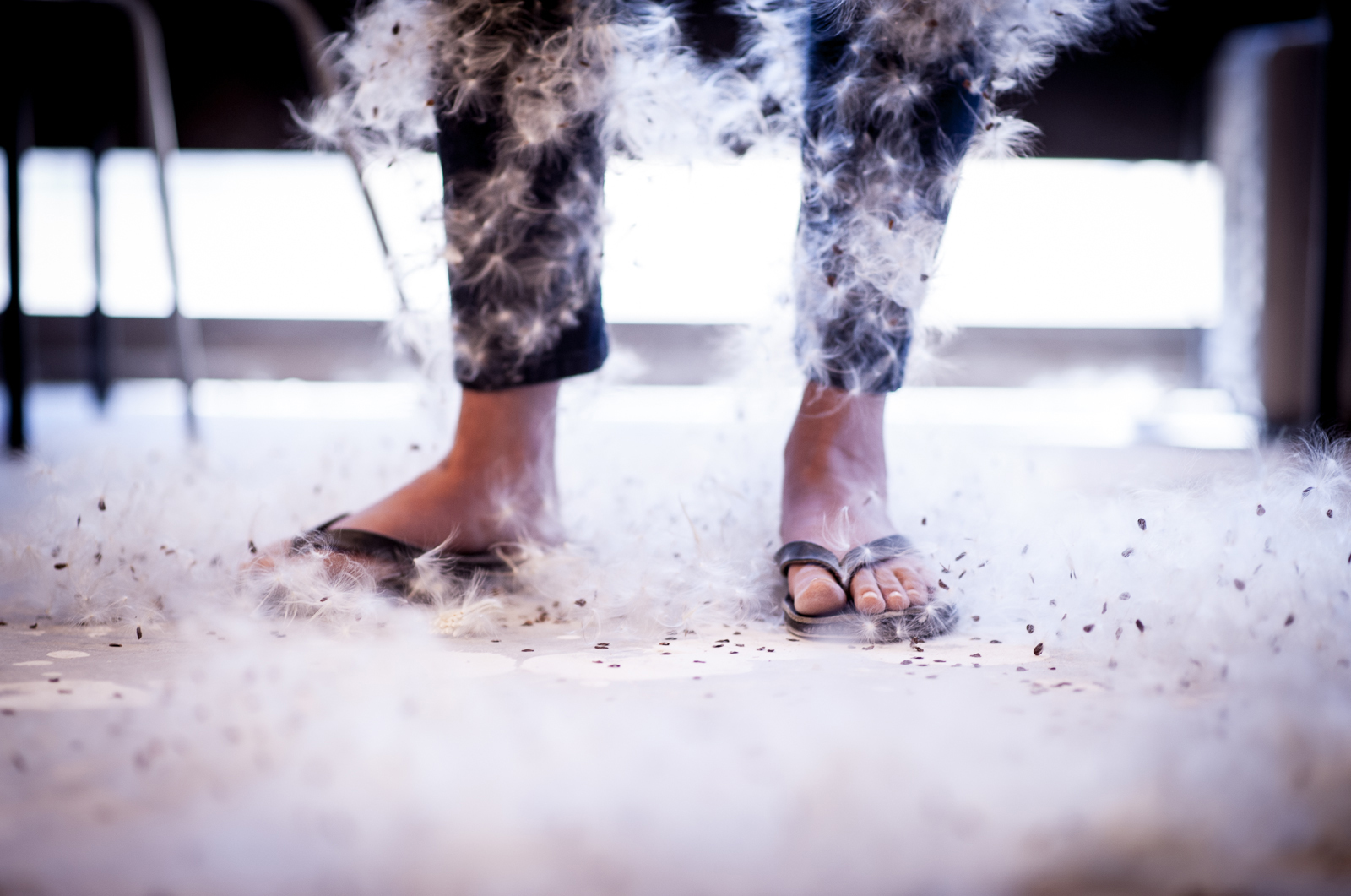 Colour Maisch’s exhibitThe Soft Animal of your Body opens at Nox Contemporaryduring the Salt Lake Gallery Stroll, Friday, June 21 from 6-9 pm. The exhibit continues through July 19. It will be the gallery’s final exhibit before closing their doors. You can view more of her work at colourmaisch.com. A review of the artists’ exhibit at Finch Lane Gallery appeared in the May 2010 edition of 15 Bytes.