COLOR FROM A LOCAL HIVE
by Geoff Wichert

Regular readers of 15 Bytes may have had their curiosity piqued by the appearance, in the current issue, of wax used as a finish for works of art made in other media, such as photography. The works referred to in 15 Bytes are being shown in Park City, and while that’s not too far to go to check them out, an opportunity to glimpse the possibilities of wax and resin finishes is currently available in the Art Access II Gallery. This technique is part of a general revival of encaustic that began in the 1990s, although its inspiration comes from much earlier use of wax by Jasper Johns and a few other painters in early Pop Art works of the 1960s, including the well-known flags and targets. Wax and resin as varnishes have—along with Encaustic itself—been slowly gaining ground in the years since, and are finally achieving the wide-spread visibility and popularity they deserve. 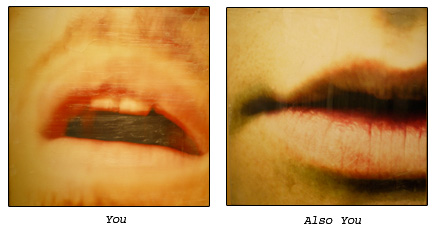 In the work of Aubrey Trinnaman, for example, the use of wax and resin over close-up photos of mouths creates a paradoxical sense of their immediacy as moist portals even as they become metaphors for our isolation and the difficulty of communicating. For this reason alone, it’s worth stopping by Art Access to see this technique live, in 3-D, and with your own eyes.

Aubrey Trinnaman, and her sister, painter Jamaica Trinnaman, are exhibiting at Art Access II Gallery through October 10. Showing concurrently in the Art Access Gallery is Mujeres de Colores, paintings by V. Kim Martinez, which will be the subject of a review in our October edition.