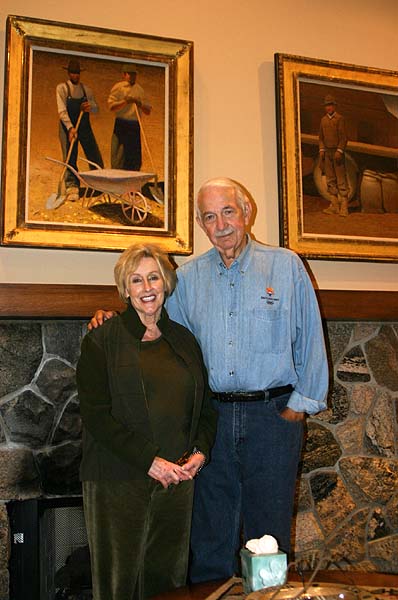 When a couple begins collecting art seriously, it is always a team effort. Collecting art is a time (and money) consuming process, and the effect it has on a couple’s home — and consequently their lives — can be significant. Dean and Bonnie Stephens have worked well as a team to create a stunning and focused collection that is a reflection of their love for the West and Utah in particular.

Bonnie is the energy. When speaking about their collection, she sits perched on the edge of her sofa, talking energetically about the art and artists they have come to know and enjoy over the years. When showing me around their lovely home, she is the first to arrive at a piece, picking up a pot or turning a canvas around. Dean, on the other hand, rests easy on the couch, speaking in a slow drawl. Calmly, easily, he lets Bonnie take the lead in the discussion. But, inevitably it is to Dean that Bonnie turns to verify the name of an artist or a piece. It is Dean that knows the provenance of the work, and it becomes apparent that though his demeanor is quiet and reserved he has been an active and enthusiastic partner in the collecting process.

The Stephens’ art collecting days began years ago when Bonnie was working for the Gable House Gallery as a gallery consultant. “I didn’t ever take a salary,” Bonnie says. “I just took art.”

In the early days, the couple began collecting Western art. The Stephens’ own a ranch near Wendover and Bonnie describes Dean as a cowboy. They bought a number of pieces from Utah cowboy artist Jim Norton. During these days, Dean enjoyed going to Montana, purchasing art at the Western Art Roundup. It was at these events that Bonnie noticed her husband would inevitably bid on the pieces that would receive Best in Show and she realized Dean had a great eye.

After Bonnie left Gable, the Stephens began to collect in earnest and their interests shifted from cowboy art to Utah art. “We became enchanted with early Utah art,” Bonnie explains. “Both the history and the art itself . . . There is no disconnect in my mind between the art and the history of the art. We buy the art because it’s beautiful and appeals to us and tells us a story, but to me the history of the art of Utah is really a beautiful story.” 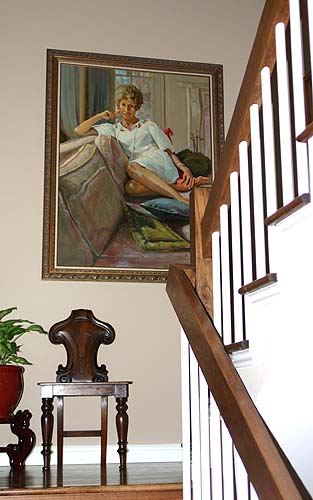 The Stephens have collected a number of pieces from early Utah artists including John Hafen, Donald Beauregard, Mabel Frazer, Florence Ware, Waldo Midgley, and A.B. Wright. Their largest collection of works by a single artist is LeConte Stewart, of whom they have pieces representing the breadth of the artist’s career, from the early teens to the artist’s last years in the eighties.

The Stephens met Stewart in the late seventies. Indicating a couple of the works hung together in their living room, Dean says, ““We bought these in 1979. I went out to their house and said ‘I’d like to buy some art’ and they just kept bringing this stuff out and laying it against the wall . . . His wife sat on the couch and LeConte just kept bringing them out and she said ‘Well do you see anything you like?’ And I said, ‘Well, gee, I see a lot that I like but I honestly can’t afford too much.’ She said ‘Well, you choose one or two you like and you can pay a hundred dollars a month,’ and I said ‘Okay’ and I did . . . As long as you paid her every time you promised she was just fine with it.”

Stewart and the other early Utah artists are what Dean refers to as “those old dead guys.” The Stephens’ collection has as many if not more works by contemporary Utah artists. Many of these artists are friends of theirs The same energy that infuses Bonnie when she speaks about their collection propelled her through eleven years as the director of the Utah Arts Council. During this tenure she became close to many of Utah’s working artists and speaks of them and their works with affection. 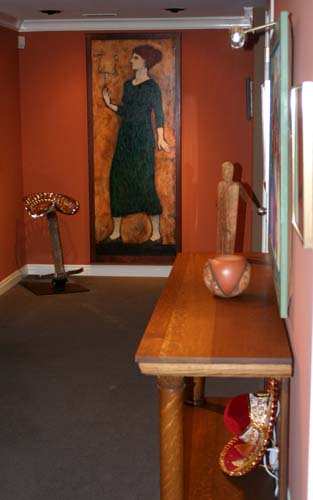 “I think we have as many fine artists as any place in the world,” Bonnie says. They have collected multiple pieces from some of these artists, including the late Danny Baxter, who painted portraits of each of the Stephens’ as well as many smaller works. Gary Ernest Smith’s works occupy prominent positions above their mantles, both upstairs and downstairs.

The Stephens purchased work from many of these painters when the artists were still young. Dean’s eye spotted the work of a young Warren Kimball at a High School art show, and, seeing that he had talent, purchased the piece, the artist’s first sale. They have also invited many to their ranch to paint. Works by Warren, Baxter, Frank Huff, Chris Sharpe, and David Merrill, all done at the ranch, hang together in a room in the Stephens’ home.

Bonnie is adamant that Utah’s working artists be treated well. She thinks collectors should have the integrity to pay the price asked for a work. And she disparages people who ask artists to donate work to a show. “We should pay for them,” Bonnie says. “We don’t ask people to do our kids’ teeth for free.”

While working at the Arts Council, Bonnie refused to accept gifts, always paying for the work she acquired. The only time she accepted a gift was one from Joe Ostraff upon her retirement. She bought an accompanying piece by the artist, “to make things even.” Ostraff’s contemporary work stands out in their collection. Along with an abstract by Lee Deffebach, it is one of the only pieces that doesn’t fit the aesthetic unity of the Stephens’ taste. Their works, from Lee Green Richards to Lee Bennion, are predominantly modernist landscapes and figure works (think Maynard Dixon, who is also part of their collection) with a strong emphasis on design and color. 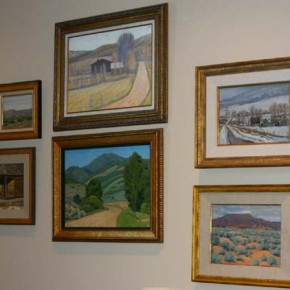 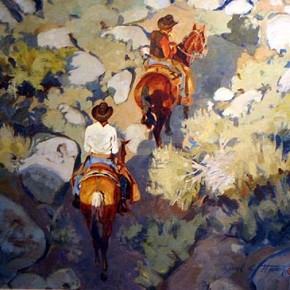 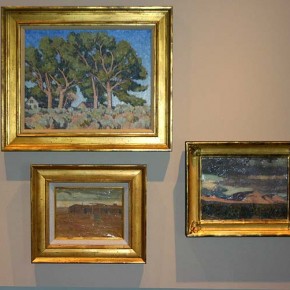 The Stephens enjoy sharing their collection and take obvious pleasure in showing people around their home, in which every wall is covered with artwork. Bonnie says that a painting by Royden Card, hanging at the end of a stairwell, is the perennial favorite. “It strikes everyone,” she says. “Even those who know little about art.” A nearby piece by Brian Kershisnik is the favorite of Bonnie’s friends. “All my friends want that because that is their life. It’s called “Spoon Tricks” and young mothers know all about that.”

After balancing her own spoons for eleven years at the Utah Arts Council, Bonnie retired Dean, who owned his own business for many years, is also retired. Bonnie’s involvement in Utah art continues. She now serves on the board of the Museum of Utah Art and History. The Stephens are not sure if they will continue collecting – they already have so much work that not all of it is on display – but with the enthusiasm they show for the work they have collected and the artists they have supported, I imagine it won’t be long before Dean’s eye spots another piece the couple decides they can’t live without. 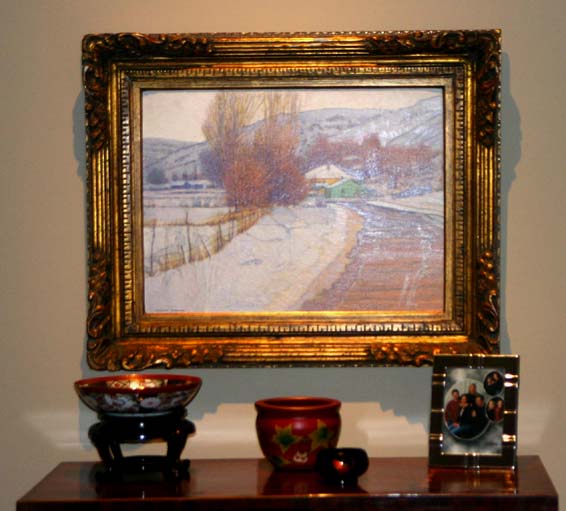