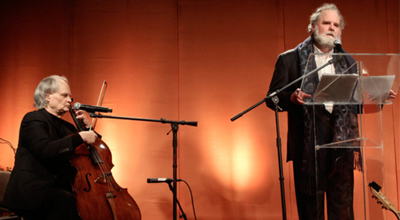 You should have seen the goosebumps last year: the sold-out Libby Gardener Concert Hall caught in one ecstatic sweep of cello and poetry. I’d been merely interested but left labeling it a TOP 5 2013 experience. And it’s happening again this Friday.

You may have seen Darling’s 2009 Prayers of Compassion or Barks featured in Bill Moyer’s Language of Life and “Fooling with Words” series on PBS.

Barks came to Jalal ad-Din Rumi in 1976, experiencing it like an expression of his anima, “an opening of my heart, a sense of reckless longing, an expansion” that nourished a hunger beyond curiosity.

“In those first months of discovering Rumi I would go down after teaching to the Bluebird Restaurant in Athens, Georgia, and have tea,” he writes in the New Expanded Edition of The Essential Rumi. “This poetry could not possibly be explicated! I loved the unpredictable spontaneity, the push-pull of great tenderness and great loneliness, of living beyond psychology, of drifting at ease inside the unsayable.”

When Rumi’s closest friend, Shams of Tabriz, disappeared (likely murdered), Barks says “the mystery of the Friend’s absence covered Rumi’s world. He himself went out searching for Shams and journeyed again to Damascus. It was there that he realized,”

Why should I seek? I am the same as
he. His essence speaks through me.
I have been looking for myself!

Diane Hamilton, co-founder of event sponsor Two Arrows Zen, was stunned when she met Coleman Barks in 2009. “He’s a genuine American bard. He has this beautiful Southern accent and a way with himself that’s both relaxing and exciting, and then David Darling, who has got to be one of the best cellists in the world, improvises, and the way they play together and tune to each other is just amazing.”

“As a person who has been engaged in a spiritual search and spiritual practice most of my life,” Hamilton  says, “I have been very moved and to some degree encouraged by Rumi’s mystical voice, his longing, his beauty, his love of God, his confidence in the spiritual nature of reality.”

A simple poem sticks with her:

Out beyond ideas of wrongdoing and rightdoing,
there is a field. I’ll meet you there.
When the soul lies down in that grass,

the world is too full to talk about.
Ideas, language, even the phrase “each other” doesn’t make any sense.

“These are the people you want to hang out with,” Hamilton says of Barks and Darling. “They have this deep spiritual companionship and creativity and love of beauty.”

The event will take place at Libby Gardner Hall on Friday, February 7 at 7 pm. Tickets are available at http://rumislc.brownpapertickets.com/ or by calling (800) 838-3006. Learn more about Coleman Barks and David Darling.