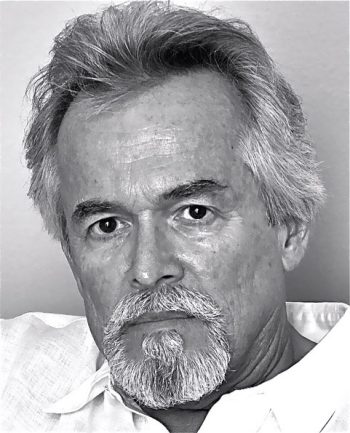 Explosion and the Decline of Periodic Style

From the Latin: explosio,

which is not to detonate

but to frighten away

as in clapping away birds.

To drive away birds.

There are no birds in Aleppo,

buildings returned to sand and shard

by clapping louder than dreams

of noise, beginning without knowing

than Greek Fire but more immediate.

A disease not invented by disease.

More one clap than leprosy

but of similar result: the canker—

Runners from the trailhead to the path and shore

of a prehistoric salt sea, nod or do not nod hello

as they come and come to go and go.

This indecision as to what is so

surrenders to the confusion of not knowing

a better way to be confused.  We are rowing

in the air where once great fishes were soaring

over deserts yet to be, while I am pouring

words into my phone, hoping text from speech

Athleticism today is dumb, but of sufficient speed.

I nod and move along the trail to an ill-conceived

the chimney scattered—returned to field stone—

the iron boiler rusted through, useless, its own

When Coyote made the First People

from the blood of a monster

whose name is not known,

the only word Coyote said

when done was, “Enough.”

Nothing more is remembered

by the songs The People remember

or by the people who came after,

white as a tooth with no blood in it

and more terrible than original blood.

I’ve seen the pictures, so I know:

No one goes without hesitation;

at the end, everybody wonders,

I’ve lost the gift for metaphor,

rummage among words as though

they were wrenches, the hard utility

of a job requiring the right tool,

and saw myself caught on video

by the newly installed security’s watching

No one comes without reservation

to this place so at the end of else.

Everyone wonders whether they have

packed the right clothes (does it snow?)

whether they were the right resolutions

and whether they were right to say so.

Everyone fears being caught on video,

the insecurity of not wanting to know:

There is no secure system.

At the end, everyone wonders

whether the rules were metaphor,

whether there were correct tools,

whether anyone was right to say so.

I’ve seen the pictures. I know.

Clifton H. Jolley has published poems and essays in the New York Times, Western Folklore Quarterly, Utah Historical Quarterly, Mountainwest, Dialogue, Sunstone, Deseret News, Ensign, Salt Lake Tribune, and Huffington Post. His documentaries have been nominated for regional Emmys. His essays have been awarded by the Associated Press and are collected in the book Children’s Voices.