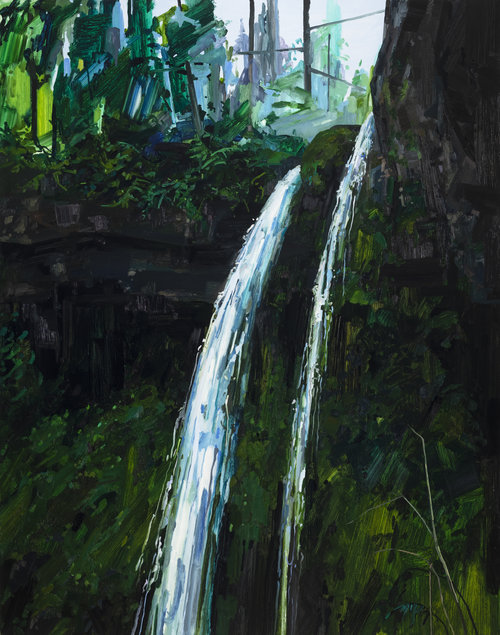 In Claire Sherman’s “Waterfall,” a jet of water spills from a fern-covered rock overhead into a grotto of shaded shrubbery. The stone face display a variety of surface features: jagged in the foreground, smooth along the lip where polished by the rushing water, and cubical underneath the ledge where stone has fractured away. Nearby, in “Grass and Snow,” a sun-struck, white blanket reveals through highlights and shadows the shape of the ground beneath. These vividly rendered details are skillful illusions: not laboriously painted ones, but the product of knowing, spontaneous, and always loose brushwork.

It’s often said that a Van Eyck painting so closely aligns with visible reality that viewers expect, if they could look closely enough, that they would be able to see the stitches in an angel’s gown. Persian miniatures, the impact of Muslim culture in Hindu India, are another example of paint duplicating everything the eyes can see. But today’s artists take a different approach. A camera can do what past artists did, but only a human hand can reveal both the subject being rendered and, with the same strokes, the presence of the painter and the process that produced it. Ever since Rembrandt’s day, part of the pleasure of representational painting has been the opportunity to approach a convincing image until it breaks up into visible brushwork, then back up again until the magic presence is restored.

In the gallery, then, the ideal location for this miracle is about eight feet out. Further and there might not be enough room, closer and it might never be seen. But Claire Sherman has found a way to expand the zone of transformation, so that it’s often difficult to get either back to the point of a complete illusion or close enough to see pure paint. Instead, her often completely convincing, leafy green world always reminds its admirer that it’s a painting, even as it looks like an actual place. Not for her the delusion that somewhere away from the gallery there is a world that is intact, where nature rules and all is pristine. Her world is everywhere touched by the human hand. 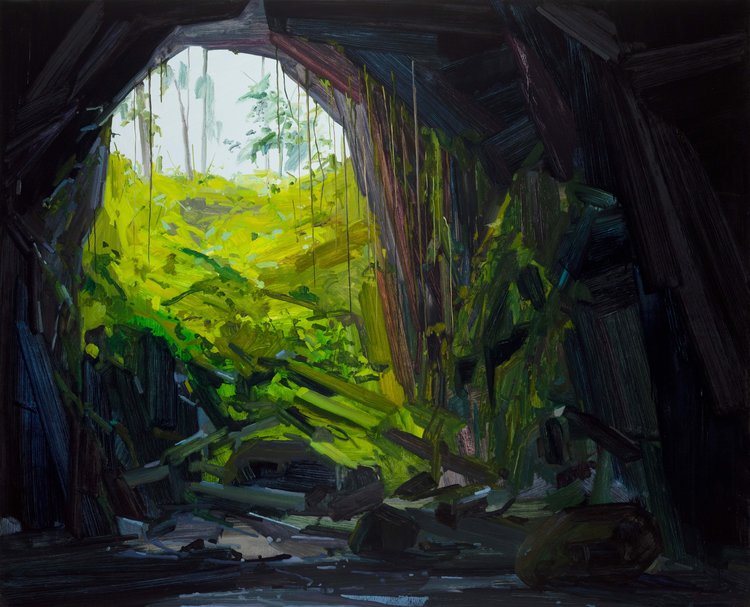 It’s not surprising, then, to learn that Sherman builds up her scenes from fragmentary details grounded in real places, some she’s seen remotely and others she found and photographed for herself. The groves and glades she assembles from these examples are imaginary, but convincing scenes, not portrayals of specific places, though it’s possible that her native Ohio, a gentle, flat land of plentiful water, is reflected in the choices she makes. Still, her audience will never be closer to her landscapes than they are in the gallery.

Since the invention of the Global Positioning Satellite, a lot of thought has been given to how we previously located ourselves in the world. It makes sense that if we were rooted in the ground like trees, we wouldn’t have the sense of landscape as moveable, interchangeable: a central adventure that we use not only to navigate in space, but to tell ourselves so many stories, simple to elaborate, based on the locations of events, the relations between places, and the travels we make among them. So what Claire Sherman paints has more than a conventional relevance to her contemporary viewer. No one yet knows what effect the visual narrowing of using GPS-aided devices to find our way will have, but it seems probable that thousands of years of navigating by remembering what plants live where, and how to locate the waterfall in relation to the cave — that such skills are either durable, in which case our keen ability to practice them through methods like landscape images makes great sense, or else they can be lost, replaced by our new machines. Either way, landscape imaging takes on a new meaning and importance. 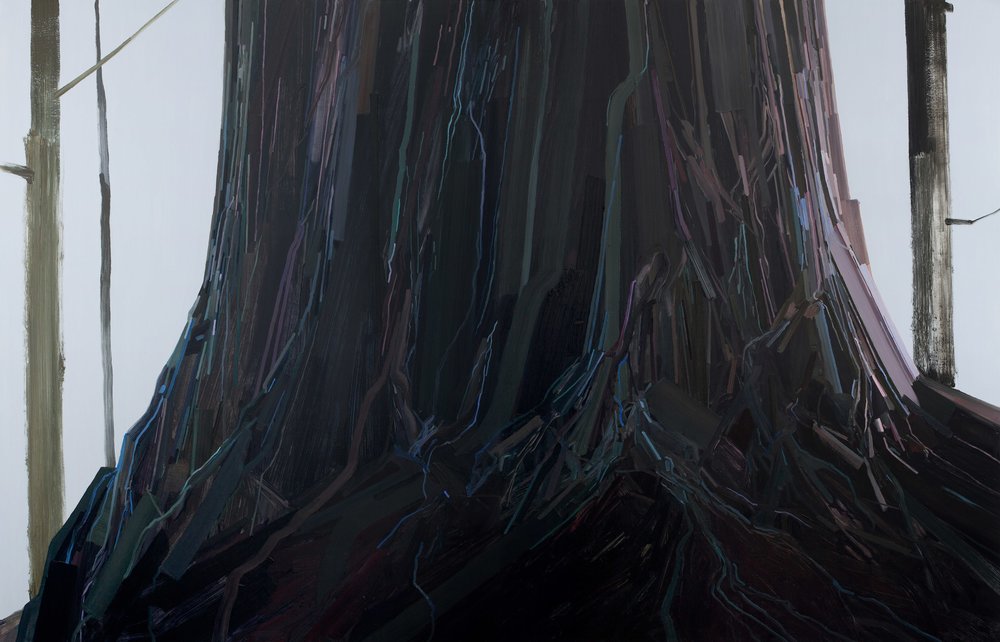 Claire Sherman is largely known for two contrasting styles of work. On the one hand, her major, painted landscapes are so large that viewers can easily imagine just walking into them, and so follow their eyes into the scenery she presents. This reaches a particular moment in her trees, where her bold brush strokes give a sense of great physical strength to their massive boles. On the other hand, she is known for sensitive, close-up drawings of delicate plants and flowers. Unfortunately, none of these are at the Kimball. What we have instead is a new series, one not widely seen yet, of small-to-middling sized paintings that foreground the climatic conditions of nature: seasons, snow, flowering cycles, and so forth. Three of these shown together highlight their sensitivity and, at the same time, how well the painter can capture a smaller view of nature than she has painted in the past.

Sherman’s New York gallery has published comments about what her art may tell viewers about a world where nature is rarely still entirely “natural.” Some argue that the plants she depicts are already in a late evolutionary response to disruption: in the grip of what happens when large plots are torn up by developers, or invasive species are introduced, whether deliberately by landscapers or accidentally by global trade practices, or ultimately, when the climate begins to change. In the West, which she doesn’t specifically paint, an example is Tamarisk, a Euro-Asian plant that thrives in dry climates, and so has taken over enormous swaths of the western United States since its introduction here, producing often impenetrable thickets where once there was open, walkable land. Some of this is suggested by Sherman’s images of vines growing over other plants or hanging from trees, and it’s interesting to speculate about what the Southwest version of her canvases might look like. It’s an open secret that the high country of Utah isn’t white year-round, and it follows that the green world captured by Claire Sherman may depict it, and the future, more closely than we know.