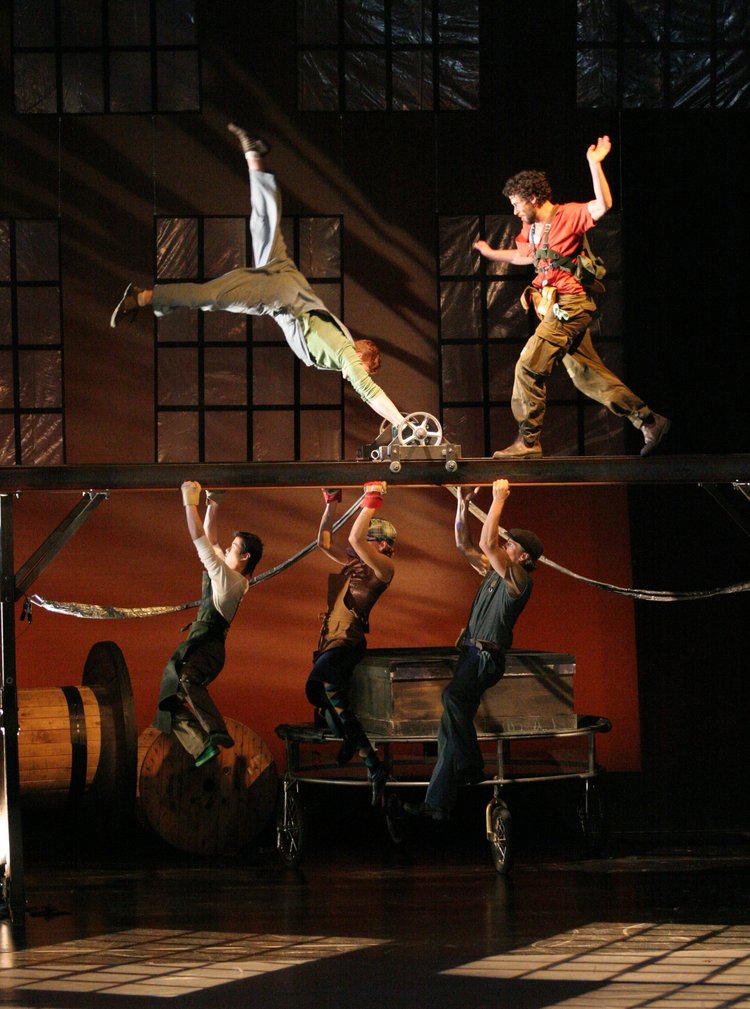 UtahPresents has brought a potpourri of performances to Salt Lake City’s Kingsbury Hall. Within this wide expanse, Cirque Mechanics is perhaps the most unconventional of troupes to tromp on its stage. Acclaimed as the most recent reincarnation of circus, the group displays a prestigious cast with many Cirque du Soleil veterans. But while Cirque du Soleil transports viewers into whimsical fantasy, Cirque Mechanic strives to find whimsy within the mundane of everyday life.

Cirque Mechanics’ Birdhouse Factory features a “widget” factory representing the depression era. The show focuses on the workers within that factory through playful shenanigans and outbursts of talent. Narratively, the injury of a bird in the factory boiler brings this group together in caring for the animal, transforming assembly line drudgery into a flourishing community. The aims of the show are simple and obvious. To quote the program directly, “Birdhouse Factory delivers a timeless message of hope, camaraderie, and the power of the human collaborative spirit.” These themes fluxed in and out of cohesion with the inherently individualistic circus acts, sometimes getting lost in the close concentration elicited by individual performers.

The show attempts to transplant traditional circus vignettes into one storyline by assigning each performer a character. This would create continuity if there were an equal balance of development among the characters, but Birdhouse Factory only successfully fleshes out characters with more personable talents. Juggler Thom Wall played the part of the factory’s high-strung boss, mischievously balancing cups with the same charisma of a court jester. Chase Clup’s “Clown Radio” used his facial dexterity to show an enormous breadth of emotion as he conducted the audience through a bird tweet rendition of Beethoven, games with a tape measurement, and Britney Spears cameos. These two performers were engaging and jovial in how they related to the audience.

The rest of the cast was homogenized — without a distinct role in the narrative flow; however, some value is found in how the prop-based acts engaged with the setting. Cirque Mechanic claims Birdhouse Factory is unique because of its relationship between performance and machine. It is true that the acts with mechanic components showcased well, even without character, because they were able to emulate the setting of a factory. Cornell Freeney’s strength on the German wheel invoked the image of a turning gear. The three trampoline artists’ act naturally situated their characters as workers who flipped on and off of a high beam while on break.

Meanwhile more whimsical acts, such as contortion and aerial arts, felt abstract and unanchored within Birdhouse Factory. These acts rode on memorable moments — distractions from their clunky transitions. An exception was the chair stacking act that culminated in the hanging of a bird house, which provided a concrete connection even if only in its conclusion. In contrast, the hoop dance performed by Elena Sanders felt like an anti-transition, beginning with a female worker tearing off her uniform to reveal a showgirl outfit underneath as she performed for her fellow workers during their lunch break.

I noted an overall lack of congruent female representation. Female characters were either non-existent or reminiscent of circus eroticism. Circus performance at its core embraces and enhances the exotic and sensual, which in combination with a lack of narrative representation felt overbearing for the few female performers, who were undeniably talented and could have held stronger roles. The overly imagistic and unsubstantial female characters in Birdhouse Factory served as an antecedent to the alleged injured bird, who was not seen at all until the last scene. As the instigator of the plot, the bird should have provided the binding of the show, but her image was lost among the whimsical and sensual performers of Cirque Mechanics.

I dream that all these critiques could be applied: characters could be more collaborative, smoothing the narrative flow; the pace could be quickened to avoid excessive mono-focus; and the female presence could be given more holistic roles. Ultimately, Birdhouse Factory is still a circus show with a circus format. I applaud the specialties of each individual performer, all masters of their crafts. I ask more of Cirque Mechanics, if they want success l within their own expressed themes. More hope, camaraderie, and power. If Cirque Mechanics wishes to show the circus within real life, they need to find the overlap between realism and escapism.