Chris Dunker: Driven by the Image 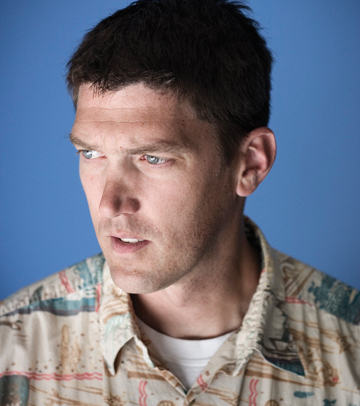 When I asked photographer Chris Dunker to define “fine art photography” for me, he answered, “A photograph is fine art when it is made with the sole intention of a self-expression; not for money or client but because the artist is motivated and driven by the image.”

As an artist as well as a commercial photographer, Dunker swings from the intention of self-expression to pleasing clients. But somehow, as any good artist should, he manages to fuse his artistic talents with his commercial interests where possible. And his commercial experience certainly does him a favor when it comes to marketing his artwork.

Dunker grew up in the high desert of California, adjacent to the China Lake Naval Air Weapons Station, where he was surrounded by industrial and military architecturre. His father, an amateur (sometimes professional) photographer, took Dunker with him on projects and introduced him to photography.

Dunker did his undergraduate work at California Polytechnic State University and then the mountains and rivers of Logan brought him to Utah State University to pursue an MFA. The TA-ship and out-of-state waiver made it a good deal all around. He cites Craig Law and Sara Northerner as strong influences. “I owe my expressive documentary approach to Craig Law and his Rock Art project where the purpose of the photo is a document but imbued with expressive devices. And Sara was a good teacher as far as meaning and content of an image.”

During his schooling, Dunker also worked for professors, photographed weddings and provided imaging services for graphic designer friends. As he photographed more and more products, he acquired more clients and bigger projects until he eventually established his own imaging company. 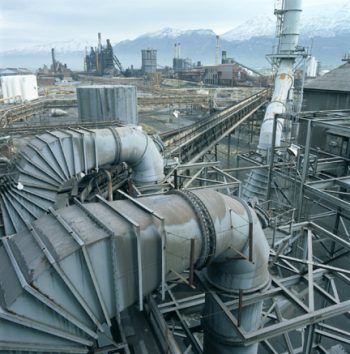 “The artwork is a black hole of finance,” explained Dunker as he led me through Dunker Imaging, the money-making operation of his career.

Happily located in Logan, Utah, Dunker Imaging is a commercial photograph studio that supplies services to companies and others who need images for their products or services. Clients range from the City of Logan to a woodworker down the street to cuts of beef. When I walked in, Dunker’s staff was working on samples of hardware finishes for a catalog. He’s been in the building for six years and his wife runs the Medici Company, a design firm in the same building. Although Dunker Imaging pays the bills, the artist is trying to carve a niche where his personal artwork can function just as well as his commercial work. There is a clear collusion between his commercial and personal work as he imposes his expressive style on subjects where possible.

It was Dunker’s “personal work” that first attracted me to his studio in 2005, and it was then that I saw the beginnings of what would become his most significant project yet: Dismantling Geneva Steel.

Constructed in Vineyard, Utah during WWII, Geneva Steel was the largest steel manufacturing plant west of the Mississippi River, but in 2007 it was closed down permanently. Having grown up on a naval base with military architecture, Dunker was always interested in industrial culture and, as a student, industrial music had a strong impact on him. He implemented industrial symbols and motifs into his work very early. This interest is what drew him to Geneva Steel and its simple designs of utility. “I liked the idea of anonymous sculpture where objects designed for a specific function have an inherent beauty and aesthetic to them.” 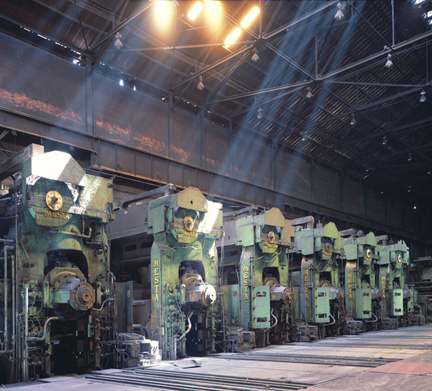 Dunker began approaching Geneva Steel several years ago when he taught at Utah State University. “I falsely believed that teaching at a university would buy me some credibility, but the plant was still operational and there was no advantage for them to let me come in.” Eventually, Dunker’s persistence (and agreement to photograph the remaining executives) convinced CEO Ken Johnson to grant him exclusive access.

In November 2004, Dunker began his three year endeavor. This project was definitely unprecedented for him in terms of its scope and potential. And it was unique in that the inevitable closure of the plant added a sense of urgency; there would be times when he wouldn’t visit the plant for a few months, but then he would drive by and the desire to continue would hit him. “It’s sort of a Pandora’s box where you prod around and a whole new world opens up and you realize how much there is to do,” says Dunker.

He began with a shotgun approach where he photographed everything that fell in front of the lens, but as he became more discerning in how, what and when he chose to photograph, the process evolved. “I broke it down into three things I thought would explain what Geneva Steel was about: machines, architecture and interior spaces.” 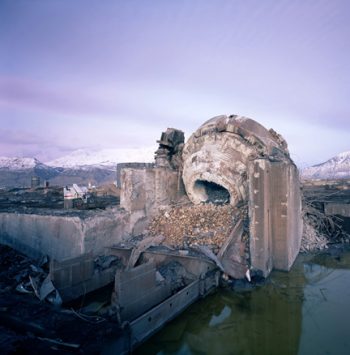 Photographs of the Geneva Steel project first appeared at The Alliance for the Varied Arts in Logan where they were shown in a smaller, traditional manner with a frame and glass. Dunker soon realized big prints would work better. Since then, the prints have shown at the Rio Gallery, Finch Lane Gallery, and most recently, 511 Gallery in New York. Beginning March 14, Brigham Young University’s Museum of Art will host the most comprehensive Geneva Steel exhibit to date. “The show will consist of 55-60 pieces ranging from 20 x 20 to 43 x 110 inches,” says Dunker. “It’s a good overview of the whole project.”

When you visit the exhibit, you’ll find it has a simple and industrial feel which dovetails nicely with the imagery and the subject matter. There are two modes of presentation: the first has the prints laminated to aluminum with a clear coat and a c-channel sub frame on the back. The second is a more traditional presentation with glazing and a simple black, deep frame. “The first mode came about because of specific needs,” says Dunker. “I wanted to display large prints, but dealing with large sheets of glass is expensive and cumbersome.” Displaying the prints without glass brought a visual advantage too as it eliminated interference between the viewer and the content.

The viewer should allow themselves time with the images. Not only will the scale and subject matter grab you, the surreal lighting, created by artificial light sources, will also capture your attention as you study the unnatural environment. One feels a sense of reverence as the abandoned equipment glows with a monumental presence in the remains of what used to be a loud and bustling atmosphere. The sharpness and complexity in what seems a simple composition enriches the images, elevating them to beautiful works of art rather than mere documents.

As an artist, Dunker looked beyond the subject and placed shapes and values on what he was seeing. “I base my compositional decisions on basic responses to information on the ground glass. My responses seem more genuine and effective when I access this basic response, which is clear, focused, and yet entirely removed from everything except balance. Every other visual device is built on that foundation: metaphor, color, subject, contextualizing information, light sources, flares and streaks as subject, secondary visual themes…” Dunker also put together a book for this exhibit; a catalog, featuring 40 color plates from Dismantling Geneva Steel as well as some historical photographs. Essays by Sara Northerner and Diana Turnbow are also included. 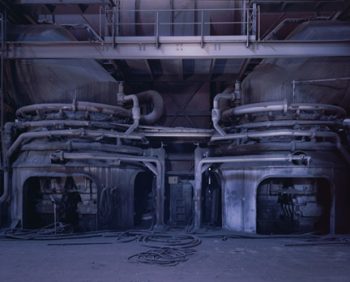 When asked what he hopes people get from this exhibit, Dunker answered: “A sense of what Geneva Steel was. Entertainment. To adopt a role of archeologist; a greater understanding and appreciation of what photography is and what it could be; to consider the transitional state of our country’s economic and social constitution. To activate the viewer’s imagination by presenting fact based documents which are so outside of their common experience the viewer is jettisoned into a state of disbelief and forced reconciliation. I also want them to get a book.”

Dismantling Geneva Steel opens at the MOA on March 14th and continues through November 1st. Books are available for $19.95. The Museum of Art will host an artist lecture and exhibition preview on Thursday, March 13, 2008 from 7 to 9 p.m. Dunker will present a lecture on his work at 7 p.m. in the Museum Auditorium on the museum’s lower level. A preview of the exhibition and light refreshments will follow the lecture. The lecture and reception are free and open to the public.